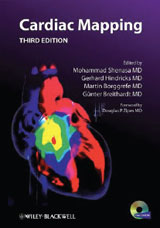 Textbooks of cardiac electrophysiology are not renowned for being easy to read, but this is one of the rare examples in which the authors have maintained a concise and accessible style throughout. The chapters have been kept short enough to allow the reader to cover each one in a short space of time. Despite this, the book covers a lot of very up-to-date material and presents many illustrative examples, including videos on an accompanying CD-ROM.

The title might suggest that only complex cardiac mapping techniques will be covered, but this is not the case. While there is an emphasis on these procedures and their role in the ablation of complex substrate, such as scar-related ventricular tachycardia and left atrial arrhythmias, the standard approach for mapping and ablation of an accessory pathway, the AV nodal slow pathway, and the cavo-tricuspid isthmus are also covered in the relevant chapters. Due to this comprehensive approach, the authors have put together a book that covers all aspects of modern electrophysiology and ablation, and which would serve very nicely as a stand-alone textbook of invasive electrophysiology.

The book contains an excellent chapter on cardiac anatomy, as well as sections on the role of CT and MRI for diagnostic purposes in patients with arrhythmias, together with their role in integrated electro-anatomical mapping techniques. All the systems currently available for electro-anatomical mapping are included, with understandable explanations on how they work as well as on their application to assist the ablation of various arrhythmia substrates. Throughout the book there are numerous editorial errors which, while irritating for a book of this quality, are not enough to detract from the overall impression.