Cardiac auscultation is a critical part of the clinical examination. In antiquity physicians listened to heart sounds directly by placing their ear to the chest. In 1816 Laennec was asked to examine a young ‘corpulent’ woman in Paris, out of embarrassment he rolled a sheaf of paper into a cylinder to listen to her heart sounds, the stethoscope was invented. Initially, Laennec applied his invention to study cardiopulmonary diseases where he correlated bedside findings with autopsy results.(1

A skill in decline 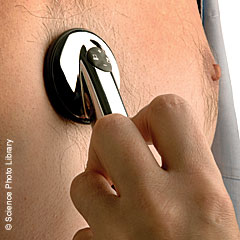 Competent cardiac auscultation is clearly in decline and the lack of ability to either hear or interpret an abnormality starts in medical school and continues through to junior doctors of all grades. In a recent study from Aarhus in Denmark, 80 medical students (second year with no clinical experience having only studied anatomy and practised cardiac auscultation for one hour in a skills laboratory (n=40), fifth year with one year of clinical experience (n=40), and 29 doctors (pre-registration house officers [PRHOs; n=20] and cardiologists [n=9]) were assessed with regard to their ability to detect cardiac murmurs and their underlying cause. While the level of experience was related to the ability to diagnose the conditions from which the murmurs originated (r=0.45, p<0.0001), no correlation was found between level of experience and the ability to identify persons with cardiac murmurs from healthy controls, and all groups showed a tendency to interpret healthy heart sounds as cardiac murmurs.2

This is clearly an international problem as highlighted by a study of internal medicine residents in the United States, Canada and England, where the correct assessment on auscultation was made in only 22%, 26% and 20% of patients, respectively.3 Similarly, in a recent study of paediatric residents in the US, the overall diagnostic accuracy for all residents was poor at 30%, and improved only marginally with training, while a cardiology rotation only improved their ability to diagnose diastolic murmurs of aortic regurgitation and differentiate innocent from pathological murmurs.4 Therefore, overall the sensitivity of cardiac auscultation is poor and ranges between 0.21–1.00, which is attributed to difficulties in diagnosing diastolic murmurs, as the sensitivity of cardiac auscultation for systolic murmurs alone is better and ranges between 0.67–1.00.5,6

In an elderly patient admitted with syncope or chest pain, the classical high-pitched ‘seagull’ murmur, best heard at the upper right sternal border radiating throughout the praecordium and neck, surely indicates aortic stenosis. Yet time and time again such murmurs are either not detected or misdiagnosed because the high-frequency component of the murmur, which is often transmitted to the lower left sternal border and cardiac apex extending through most of systole, is interpreted as a pan systolic murmur of mitral regurgitation. Or a co-existing pan systolic murmur of mitral regurgitation is recorded as the predominant, or only, murmur, with the ejection systolic murmur being missed.

Juniors also fail to appreciate that the intensity of the murmur does not correlate with the severity of obstruction, while an inaudible aortic component of the second heart sound due to heavy calcification, does. Furthermore, of direct clinical relevance, reverse splitting of the second heart sound may occur when patients with aortic stenosis develop left ventricular failure and the fourth heart sound disappears when they develop atrial fibrillation. Additionally, the basal diastolic murmur of aortic regurgitation can be heard in over half of patients with aortic valve stenosis, and yet is commonly missed.

Despite the abundance of auscultatory findings with direct clinical rather than esoteric relevance, the requirement for demonstrating an adequate level of competence when performing cardiac auscultation has fallen to unbelievably low levels. Nowhere is it more apparent than when one is examining for the finals at medical school or at the part 2 clinical examination (PACES) for membership of the Royal College of Physicians (MRCP). Thus, in finals it now suffices to identify a ‘systolic murmur’, setting the standard any higher to identify the valve involved or indeed the diagnosis, and we might fail too many students! Similarly, in the MRCP, in a patient with an aortic valve replacement, the candidate can miss the diastolic murmur, which may represent bacterial endocarditis, and yet pass by identifying the prosthetic heart sound.

Of course, abnormal auscultatory findings can be found, suggestive of significant pathology, and yet echocardiography fails to confirm this. Thus, in a recent study of 3,997 elderly patients undergoing surgery for hip fracture, a murmur suggestive of aortic stenosis was detected by a junior doctor and confirmed by a senior member of the orthogeriatric team in 908 (22.7%) patients, and yet the echocardiogram demonstrated mild (65.4%), moderate (23.5%) and severe (11.0%) aortic stenosis in only 272 (30%) of these patients.7 In another study of 3,462 children in Fiji, screened for rheumatic heart disease, 349 (10.4%) were found to have a murmur, yet only 29 (8.7%) of these patients had an abnormality confirmed on echocardiography.8 Similarly, of 2,170 children examined in Mozambique for rheumatic heart disease, by physicians ‘experienced in the diagnosis of rheumatic heart disease’, 456 had a cardiac murmur of whom 91 were suspected to have an organic lesions at auscultation, yet only 10 (10.9%) of them had cardiac lesions confirmed by echocardiography (five had valvular lesions associated with rheumatic heart disease, and five had congenital heart lesions).9 Thus, poor cardiac auscultation skills will not only miss significant pathology but may well over diagnose apparent pathology, which has significant financial implications in terms of inappropriate referral for echocardiography.

What one hears and interprets from cardiac auscultation requires years of practice and experience. Many factors have conspired to poorly train our juniors. The present drive to deliver a tick-box undergraduate curriculum, has served to take students away from patients and the acquisition of cardiac auscultation skills. Ever burgeoning numbers in clinical teaching groups severely restricts the one-to-one teaching so necessary to learn cardiac auscultation. Where we would have been taught in groups of three or four, it is commonplace to have eight or more students per group. Once our juniors qualify, the European working time directive (EWTD) enacted to “protect the health and safety of workers in the European Union” lays down minimum requirements in relation to working hours, rest periods, annual leave and working arrangements, but in doing so significantly limits exposure to patients and hence clinical signs. In a recent survey of specialist registrars in anaesthesia, 71.8% (95% confidence interval [CI] 60.7–81.3) of trainees believed the EWTD has had a deleterious effect on their training and experience with 38.6% (95% CI 27.8–50.3) feeling they were not functioning as well as doctors.10

As seniors we bemoan the lack of continuity of care because of its impact on patient care. However, with regard to the demise of clinical skills, this change in working pattern has a direct impact on teaching and learning due to fragmentation of the clinical encounter. Where once the patient was assessed and reassessed by the same junior team and senior consultant from admission to discharge, now a clock-on, clock-off mentality ensures that the juniors ‘process’ the patients but often fail to accurately delineate the clinical findings to derive a diagnosis, differential diagnosis and management plan during their shift.

The perfect teaching opportunity arose when the house officer saw an acute admission and undertook cardiac auscultation with a recognition that their senior house officer (SHO), registrar and consultant would also examine and either reinforce or question their findings. Yet now the juniors will seldom examine or reassess clinical signs with seniors to either learn from their experience, or to detect a change in the initial findings, suggestive of an improvement or deterioration in the condition of the patient. Hence, the patient who is admitted with a temperature, raised C-reactive protein (CRP) and a positive blood culture is diagnosed and treated for pneumonia because the junior missed the murmurs of endocarditis on his aortic and mitral valves.

It is no surprise that in a recent analysis of the learning and professional development narratives of hospital consultants training junior staff they felt that new working patterns in the context of EWTD and Modernising Medical Careers (MMC) have changed the nature of medical education with the “Loss of continuity of care, reduced clinical exposure of medical trainees and loss of the popular apprenticeship model” being seen as detrimental for the quality of medical training and patient care.11

Finally, cardiac auscultation is indispensable and an absolute necessity for the complete examination of the patient. Teaching both students and juniors this skill depends on showing them patients with and without pathology, and building and reinforcing their clinical skills. Unfortunately, the all-knowing master diagnostician or ‘general physician’ is no longer at hand and has been replaced either by the specialist who is increasingly reliant on technology and multiple investigations, or by the busy Medical Assessment Unit (MAU) junior or senior who are too busy ‘processing patients’. We must ensure that Laennec’s almost 200-year-old invention continues to evolve, and enables us to fulfil the meaning of the word stethoscope (from the Greek ‘stethos’, meaning chest, and ‘skopein’, meaning to explore) for the betterment of our patients.

Cardiac auscultation: the past, present and future