Sandwell General Hospital is an acute district general hospital that provides primary angioplasty service without on-site cardiac surgical facilities. The service was rolled out in stages in July 2005 and achieved 24-hour status by January 2007. Its two distinguishing features are collaboration with its partner hospital of the same National Health Service (NHS) trust for after-hours angioplasties, and mobilisation of interventional cardiologists to whichever one of the two hospitals that patients present to. We aimed to show that 24-hour primary angioplasty service by this collaboration is feasible and can achieve recommended door-to-balloon times. A retrospective audit of the British Cardiovascular Intervention Society database of 381 primary angioplasties over a four-year period from June 2005 to June 2009 was performed. 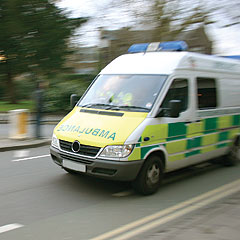 Prompt primary percutaneous coronary intervention (PPCI) is the preferred treatment for patients presenting with ST-segment elevation myocardial infarction (STEMI).1 Clinical outcomes are better with higher procedural volume2 and the intuitive deduction is that PPCIs should be performed by high-volume, usually large, tertiary hospitals. Provision of 24-hour PPCIs by collaboration of other hospitals such as district general hospitals (DGHs) has not been studied in detail.

Sandwell General Hospital is an acute DGH that provides PPCI service without on-site cardiac surgical facilities to a catchment population of 250,000. The service was rolled out in stages in July 2005 and achieved 24-hour status by January 2007. Its two distinguishing features are collaboration with its partner hospital of the same National Health Service (NHS) trust for after-hours PPCIs and mobilisation of interventional cardiologists to whichever one of the two hospitals that patients present to. PPCIs are activated by emergency physicians and the interventional team is available within 30 minutes of travelling time. We aimed to demonstrate that this model is feasible and can achieve favourable door-to-balloon (DTB) times.

We examined median DTB times and percentage of PPCIs that met target DTB time. DTB time is the interval between arrival in hospital and first balloon dilatation of the blocked coronary vessel, and the recommendation is that this opening should be achieved in less than 90 minutes. The two audit standards for this study are a median DTB time ≤90 minutes and ≥75% of PPCI achieving the recommended DTB time.4,5

Categorical variables were expressed as numbers with percentage or as odds ratio (OR) with 95% confidence interval (CI) and compared using Fisher’s exact or chi square tests. Continuous variables were expressed as mean ± one standard deviation or as median with IQR and compared using Kruskal Wallis test. All p values are two-tailed and values greater than 0.05 are considered to represent statistical non-significance (NS).

Both the audit standards were achieved. Seventy-nine per cent met the target DTB time and final median DTB of 64 minutes compares favourably to the average median DTB time of 100.4 minutes in the United States6 and 59.4 minutes (which included shorter second DTB times from hospitals receiving transfers) in the UK.7 Our overall in-hospital deaths of 3.0% for non-shocked patients were comparable with the average rate of 4.8% in the UK.7

The default treatment prior to our PPCI programme was thrombolysis followed by pre-discharge coronary angiographies, percutaneous coronary interventions (PCIs) and rescue PCIs as necessary. The programme merely brought forward these pre-discharge procedures and did not require additional staffing as the hospital was already staffed for after-hours rescue PCIs. These reasons should, therefore, contribute favourably to the cost-effectiveness of the programme even though this study did not formally assess the cost.

Because we did not transfer patients to other hospitals for PPCIs during the thrombolytic period, we could not directly compare our model against such a practice. Since the nearest hospital providing 24-hour PPCIs during our study period is 15 km or 30 minutes away, delays would necessarily and intuitively be incurred if we were to transfer, and these delays could increase mortality.8

An alternative approach to PPCI is thrombolysis followed by urgent transfer for PCI (pharmaco-invasive strategy). Our programme was started when trials such as Assessment of the Safety and Efficacy of a New Treatment Strategy for Acute Myocardial Infarction (ASSENT-4)9 showed adverse outcomes with facilitated PCI, and earlier trials such as Combined Abciximab Reteplase Stent Study in Acute Myocardial Infarction (CARESS)10 that supported the pharmaco-invasive strategy were not yet available.

Our study had limitations. Other non-assessed variables that were improving the DTB times could be present in a retrospective study. Similarly, it was not possible to ascertain which component of the model (e.g. 24-hour versus daytime-only service, mobile interventional cardiologists versus transfer PPCIs, emergency physician’s activation versus cardiologist’s activation) improved the DTB times, and it was likely that they all contributed.

We conclude that 24-hour PPCI service by a collaboration of DGHs with a physician-to-patient no-transfer model is feasible and can achieve favourable DTB times.

We thank the paramedic, medical and interventional teams of Sandwell General and Birmingham City Hospitals for making the 24-hour primary angioplasty programme possible.

Thrombus aspiration in primary percutaneous coronary intervention: to use or not to use?

Audit of cardiac catheterisation in a DGH: implications for training and patient safety