We continue our series in which Consultant Interventionist Dr Michael Norell takes a sideways look at life in the cath lab…and beyond. In this column, he considers the pressures to publish. 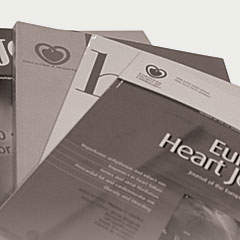 ‘Twas ever thus. Our progression along the medical career path assumes that we will all contribute to the sum of scientific knowledge – at least to some extent. A senior post in hospital practice has always demanded our name in print in one, or usually more, journals. Indeed the quality and volume of such exposure is often the discriminating factor when shortlisting candidates, all of whom might be otherwise worthy of appointment on the basis of clinical superiority and experience.

And yet academia – in its broadest terms – is not something that necessarily appeals to everyone. When applied to our own profession it often prompts the question as to whether “being a good doctor” (sic) actually requires one to have undertaken research of some form or another.

The general view – and mine as well if anyone is interested – is yes. The evaluation of new drugs, alternative treatment strategies or novel technologies incorporates a rigorous assessment scrutinised by peer review. This is followed by publication in order to allow general exposure, and perhaps the opportunity – if necessary – of reproducibility, which then stimulates further debate and discussion. A period of postgraduate training that familiarises apprentices with this approach prepares medical practitioners to be a part of that process and, thereby, enables them to better assess new evidence.

In addition, it demonstrates that an individual is capable of focussing sustained attention upon one particular subject. It assumes dogged determination and self-discipline, together with a willingness to sacrifice hours on X-Box, Play Station or Nintendo Wii, not lying-in until 3 pm at weekends and making lame excuses to avoid numerous nights out with the lads.

Sadly, the desire to produce a reasonable – if not earth-shattering – bibliography, and so possess a more marketable curriculum vitae (and sometimes worldwide acclaim), imposes undue pressure on some mortals. The medical literature is dotted with the products of their ‘research’, which extend from the methodologically questionable to the downright fraudulent. But rather than dwell upon such unfortunate contributions to Medline and Index Medicus, I would rather concentrate on how an acceptable list of publications can be amassed by employing a more bona fide approach.

The first step in the process is a supportive boss. He or she will drop occasional suggestions about possible projects or case reports, and it is up to the recipient of such nuggets to twig that therein might lay an opportunity for authorship. The late Raphael Balcon made such an aside to me in 1984, or thereabouts: “You should look at left ventricular function during coronary angioplasty”, he mused. A year later he asked, “How are you getting on with that project?” to which I looked up and replied, “You were serious about that?”

My first foray into publishing (admittedly following an easily overlooked piece of correspondence) centred on an out-patient presenting with right ventricular (RV) dysfunction. Echocardiography suggested localised thickening of the RV wall, although ultrasound technology in the early eighties did not permit more accurate characterisation of this abnormality. Sadly, the subject demised suddenly prior to a planned follow-up, but yours truly nevertheless managed to get to the coroner’s post-mortem. Subsequently, a case report of a cardiac secondary from a colonic primary adenocarcinoma (excised some years before), along with a literature review on the subject of cardiac metastasis generally, featured in a major European journal.

I recall the saying that there is a ‘home’ for every manuscript, which is similar to the words of encouragement I was given by a colleague (and believe me, I needed it) some 25 years ago: “If a paper is worth writing, then it’s worth publishing”. Abstracts are one thing, but turning them into papers is quite another. If you plot graphically the number of your papers published per unit time on the ‘x’ axis, and their corresponding abstracts similarly on the ‘y’, then the greatest slope of the exponential that disappears towards the ceiling has been defined as ‘Bull max’. At least you get the idea, I trust.

A dilemma that often presents itself to the aspiring researcher who, proudly, is poised to submit a manuscript to a prestigious periodical, is just which of your colleagues are to be included in the list of authors. It goes without saying that significant contributors should be recognised and that you – together with the department head or your research supervisor – are a minimum. But, conversely, there is a limit. One should try not to get on the wrong side of senior colleagues too early in one’s career by omitting them, but, at the same time as a mentor of mine once observed, “you don’t want a football team”.

Happily, these issues tend to sort themselves out and suffice it to say that recognising the assistance of a ‘buddy’ will often have a beneficial effect on one’s own list of papers (the phenomenon of amicus reciprocalis publicans). In my experience, those individuals who have helped me come to these tricky decisions by politely declining their own inclusion, have turned out to be high-quality advisors and valued friends. (I suspect they are also fairly shrewd in terms of their own careers and knowing what type of research they wish to be associated with.)

An MD (or similar higher degree), while not essential, is of undoubted value. It demonstrates an ability to follow a sustained process of enquiry and can usually spawn a number of quality papers. When embarking upon my own such project (I eventually heeded Raphael’s advice), a friend suggested that I approached a number of reputable journals offering a review on the subject. By that stage I was expectantly conversant with most of the literature and, thus, fairly savvy about the topic. The worse that could happen would have been a polite “No, thanks” from an editorial assistant, which was indeed the outcome in a couple of instances. Happily, however, The Lancet and the British Journal of Hospital Medicine were more farsighted and, I like to think, visionary.

I now recall that the same friend appeared in print with his middle initial as ‘X’. While I did not know him that well, I was nevertheless intrigued as to what this letter might stand for until a subsequent publication of his (he turned out to be quite prolific) featured a ‘Y’ in the same position. This is Michael Z. Norell, signing off.

One thought on “Publish or perish”