The atrioventricular (AV) conducting system of the mammalian heart was described a hundred years ago. Albert Hyman, a cardiologist working in New York City performed studies on the stopped heart. On injection of drugs into the right atrium, usually including adrenaline, the stopped heart continued beating.

He felt that it was not the drugs per se, but the needle used to inject them that initiated an electrical impulse. Hyman went on to develop and patent the first cardiac pacemaker (his term) in 1932 using a needle electrode. It was another 20 years before Paul Zoll published his experience of two patients he managed to pace via an external generator and hypodermic needles attached to the chest wall.1 Thankfully things have progressed slightly since then, and over the last 70 years we have advanced to placing an electrode transvenously rather than transcutaneously. The generator is battery powered and smaller, but the basic principle remains untouched. 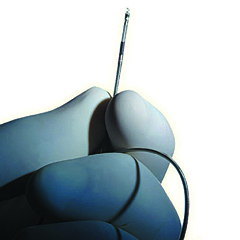 The number of temporary pacing wires being placed is reducing, largely due to the improved reperfusion management of acute myocardial infarction (MI) and improved access to permanent pacing systems. The procedure, which was once a basic skill of the medical senior house officer (SHO), is now becoming a more and more difficult competency to attain. The practical skills of doctors, particularly junior doctors, is certainly falling and there is evidence to show that less than 50% of specialist registrars training in acute medicine felt competent to provide cover for temporary pacing at a consultant level.2 An earlier six-month study of 18 hospitals in the Northern region of England showed that, at that time, 123 of the 194 pacing wires were placed by SHOs, with consultant involvement in only 14% of cases.3 The paper in this journal by Yassin et al. (see pages 34–5) shows that half of all procedures are now consultant performed, with SHOs making up a tiny minority, and then with senior supervision. While the move towards more expert intervention for this risky procedure is a good move, we must not lose sight of the fact that the training in temporary pacing must evolve. Experiential learning of medical SHOs and medical specialist registrars (SpRs) and specialty registrars (StRs) is no longer sufficient to sustain competency, and new models for delivery of temporary pacing may need to be addressed.

Temporary cardiac pacing is not without risk, and pneumothoraces, arrhythmias, infection and cardiac perforation are all well recognised.4 It is estimated that between 14% and 20% of patients undergoing transvenous pacing will experience one of these complications.5,6 The three British series of temporary pacing show a higher level of complications, at worst, around half of all subjects suffering a complication.3,7,8 All the above studies were in a different era of temporary pacing and there are very little contemporary data concerning the safety of pacing in the hands of the now less-experienced operators, but it seems unlikely that this has become any safer. Treatment of the underlying cause is always of paramount importance, and can often alleviate the need to consider a pacemaker system. Transcutaneous pacing (often with sedation) is a useful holding option in the majority of patients, and can be effective for several hours until a competent practitioner or the adequate staff and equipment become available.9

There is no internationally agreed, clear consensus opinion on exactly who should undergo transvenous pacing, but generally those who are bradycardic with haemodynamic compromise, often manifest as ventricular tachycardia (VT) secondary to bradycardia, should be considered for a temporary pacing system. Against the ‘safety’ of a temporary pacing wire, one always has to consider the several-fold increase in risk of sepsis of the permanent device, along with the acute complications described.

Contained in this issue are two case series of temporary pacing records in UK hospitals. The study by Barron et al. (see pages 32–3) presents a case series over the last six years in an outer London hospital. Of 58 procedures, 26% waited longer than four hours to be paced and of these, half were maintained on an external pacemaker. A worryingly high level of complications was observed and only 41.7% of patients had an uncomplicated procedure and survived. The study by Yassin et al. shows that repositioning of the lead and arrhythmias were very common sequelae, and that junior grade doctors in their department do not feel adequately trained in external pacing.

Temporary cardiac pacing remains an important skill to attain, the only question being, who needs to attain it. With the reduction in experience of junior doctors, it is likely that this service is going to be performed by more senior staff,
and as those juniors swiftly become seniors, it may become the sole remit of cardiologists. If this is the case, new models of care delivery will need to be established to offer this service safely and promptly, while allowing manageable
on-call rotas.

Disclaimer: Volume 17, Issue 1
THERE ARE CURRENTLY NO COMMENTS FOR THIS ARTICLE - LEAVE A COMMENT

Pacing supplement: Early days of pacing in the UK – the British contribution to the field of pacing

Complications associated with 64 temporary pacing wires implanted at a district general hospital – should this procedure be reserved for specialist centres?