News in brief from the world of cardiology.

Increase in kidney failure in people with diabetes

Diabetes UK has reported ‘concern’ in recently released figures showing a 20% increase in people with diabetes in England needing dialysis or a kidney transplant between 2008–2009.

Health economists from the University of York have said that epleronone (Inspra®) is cost-effective when added to usual care, compared to usual care alone in the management of heart failure in a post-myocardial infarction (MI) population.

Researchers from the university’s Centre for Reviews and Dissemination (CRD) evaluated the relative clinical effectiveness and cost-effectiveness of eplerenone and spironolactone in patients with heart failure following MI. The recently published study (Health Technol Assess 2010;14 [24]) shows eplerenone’s cost per QALYs (Quality-Adjusted Life-Years) ranges from £4,457 (treatment for two years) to £7,893 (lifetime treatment), well under the £20,000 to £30,000 the NHS considers value for money. 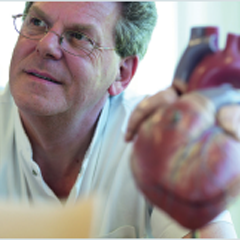 The redefinition of myocardial infarction (MI) in these recommendations requires an increase or decrease of cardiac troponin to be demonstrated in patients with symptoms of acute coronary syndrome (ACS) with at least one of the concentrations greater than the 99th percentile of the reference population.

A team led by Dr Evangelos Giannitsis (University Hospital, Heidelberg, Germany) pictured above, has shown that the Elecsys® assay was the only test available to offer this level of sensitivity and precision. “Not only can we identify MI at an earlier opportunity, but we can also now identify more patients with MI (amongst those with symptoms of ACS) than we could with the less sensitive assay,” he says. “It also means that additional tests for MI/ischaemia markers are no longer required,” he added.

Rosuvastatin (Crestor®) has received authorisation for a licence extension from the Medicines and Healthcare products Regulatory Agency (MHRA) for use in patients who are considered to be at high risk of a first major cardiovascular event.

The new indication is based on the JUPITER study, which showed a significant reduction in the combined end point of myocardial infarction, strokes and cardiovascular deaths amongst high-risk patients, defined as having a SCORE risk ≥ 5% or Framingham Risk >20%. Rosuvastatin can now be used in these patients in addition to the modification of other risk factors, such as diet and exercise.

MSD has launched a combination treatment of sitagliptin and metformin (Janumet®) for the treatment of type 2 diabetes. The company hopes the combination treatment will help reduce the pill burden on patients with diabetes and aid compliance. A survey it commissioned which included 300 UK GPs, has found that nearly half (42%) say the main issue raised by their patients is concern around forgetting to take their treatments, with nine out of 10 GPs (91%) believing that pill burden impacts concordance of type 2 patients with their treatment.

Nicotinic acid/laropiprant approved by the SMC

Nicotinic acid / laropiprant (Tredaptive®) has been accepted by the Scottish Medicines Consortium (SMC) for restricted use in NHS Scotland, as monotherapy for the treatment of dyslipidaemia in patients with combined mixed dyslipidaemia (characterised by elevated levels of LDL-cholesterol and triglycerides and low HDL-cholesterol) in patients in whom statins are considered inappropriate or not tolerated.

MSD has estimated that based on a population of over 5 million in Scotland, between 7,750–15,500 patients in the country could be experiencing non-severe side effects from statin intolerance.

Intravenous vernakalant has been shown to be superior to amiodarone in converting patients’ heart rate from atrial fibrillation (AF) to sinus rhythm within 90 minutes of the start of administration.

The results of AVRO (Active-Controlled, Multi-Center Study of Vernakalant Injection versus Amiodarone in Subjects with Recent Onset Atrial Fibrillation) were presented at a late-breaking clinical trials session at Heart Rhythm 2010, in Denver, USA, in May. The study showed 51.7% (n=116) of patients on vernakalant converted from AF to normal sinus rhythm within 90 minutes, versus 5.2% (n=116) in the amiodarone group (p<0.0001). The median time to conversion in patients who responded to vernakalant was 11 minutes. The phase III study was carried out by MSD and Cardiome Pharma Corp.