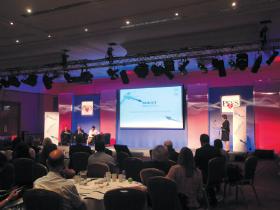 clear majority (58%) of GPs with a special interest in cardiology (GPSIs) feel unprepared to fulfill a commissioning role in the new NHS landscape, despite almost half of GPs being currently involved in commissioning, according to results from the REACCT (REAssessing Cardiology Commissioning and Treatment) report announced at the meeting.

The report also reveals that a majority of cardiologists (57%) feel unprepared to take on new commissioning roles around the management of cardiovascular disease (CVD). The report (available from: www.pccs.org.uk/report) was written by the PCCS in association with Roche Products Ltd. following an online survey, which compiled the opinions of 30 cardiologists and 100 GPSIs from around the UK.

The report’s findings were announced at the meeting, by Dr Alan Begg (Honorary Senior Lecturer, University of Dundee). Despite concerns over their readiness, both GPs (72%) and cardiologists (63%) claimed to be involved in or applying to become involved in commissioning. The REACCT survey’s findings present “a clear opportunity for the PCCS to work with our colleagues to increase that level of readiness for the new landscape we have to deal with,” said Dr Begg.

Most GPs share concerns over the proposed NHS reforms, claimed healthcare analyst and broadcaster Mr Roy Lilley, summarising the mood as one of reluctant resignation: “We don’t want to sit in a traffic jam, but we have to use the M25”. Closing with a message of hope for fellow sceptics, Mr Lilley said: “This Bill is going to go through the House of Lords… It will come back in February, I think, in a very different shape to the way in which it went”. He asserted that the reforms were not included in either coalition party’s manifesto, discrediting any attempt to push the bill through using the Parliament Act, which is only applicable “where it can be demonstrated that the public have had a chance to vote for a proposal in a general election”.

The need for reform was defended by Mr Andrew Garner (macroeconomist and former CEO of Norman Broadbent PLC), who countered disparagement of the planned reforms describing the NHS as having been “seriously damaged from its outset by politicians”. Thanking healthcare professionals in the room on behalf of the British public, Mr Garner dismissed Roy Lilley’s earlier claim that the NHS is not overmanaged as “a load of baloney”, arguing that it has been “permanently…interfered with by parliament” throughout its existence.

“We have to set up an NHS that is not governed by parliament…it has to stand apart, governed by a properly constituted board of directors”, Mr Garner said, insisting that the organisation must be saved from “amateurs in Westminister”.

The Health Secretary, Andrew Lansley, is “no longer being radical enough” to make necessary changes, argued Dr Stewart Findlay (NHS Alliance Lead for Coronary Heart Disease, and a GP in Durham Dales) saying that the changes being made to the Health and Social Care Bill are not all to its benefit. He insisted that the healthcare community must not “spend all [its] time rearranging deck chairs” in a time of crisis, expressing support for the reforms in their original state.

Giving an overview of the changes being made to the Bill, Dr Findlay asserted that “stagnation and poor integration” are afflicting many Primary Care Trusts around the country, making change necessary. He believes that GPs are uniquely qualified for the work of commissioning: “We are the closest clinicians to patients, and we have a lifelong relationship with our patients…we already coordinate care for our patients across a number of providers”. GPs access to medical records and ability to share them through the Summary Care Record also make them ideal commissioners, he added.

This claim was directly challenged by Dr Jim McLenachan (Clinical Lead for Cardiology, Leeds General Infirmary), who argued that the requirements of effective commissioning may be beyond the scope of individuals. “If you’re going to commission…you need a breadth of knowledge of whatever service you’re buying. And in an ideal world you should have access to independent verification of the quality of the service, and we don’t have that now.”

The previous system of broad healthcare networks has been responsible for many of the past decade’s success stories, Dr McLenachan argued, giving the example of the 2008 National Infarct Angioplasty Project (NIAP). The feasibility study resulted in primary angioplasty being rolled out to 88 percutaneous coronary intervention (PCI) centres in the UK. During this process, Dr McLenachan said, different implementation strategies were used in different areas to achieve the same goal – “local solutions for a national initiative” – ultimately leading to “a phenomenal turnaround for care of patients with heart attack in England”.

Loss of the networks could make this kind of broad cooperation a thing of the past, Dr McLenachan asserted: “The idea of hundreds and hundreds of centres providing for small numbers of patients each is complete madness…my biggest worry about these reforms is that you’ll finish up with small commissioning groups whose desire will be to keep their small local hospitals going, and you’ll duplicate all sorts of services in every hospital in every hamlet across the country”.

The experience of being a patient is “incredibly disempowering,” with doctors still “trained, cultured, to be rather paternalistic in approach,” according to Dr Steven Laitner (Associate Medical Director, NHS East of England). He cited the National Inpatient Survey, which showed that half of patients want to be more involved in treatment decisions, adding that most of his GP colleagues believe only a minority do so.

Dr Laitner expressed hope that a ‘new model’ NHS will focus on offering patients greater freedom to choose between alternative treatments, pointing to the Right Care NHS Atlas (Available from: http://www.rightcare.nhs.uk/index.php/nhs-atlas/), which shows huge variation in standards of care across the UK which are driven by clinical behaviour rather than patient preference. “If we don’t involve people enough in their care we get this patchwork quilt of variation in activity…we’re finding in many of these atlases there is an inverse relationship between need and supply,” Dr Laitner said.

Unnecessary hospital admissions can be avoided through educational programmes designed to encourage patient self-monitoring, said Dr Ivan Benett (Cardiology GpwSI, Manchester). Citing the development of an award-winning locally enhanced service (LES) in his own practice to support the delivery of a specialist service for patients with left ventricular systolic dysfunction (LVSD), Dr Benett asserted that “we can save money by investing in educational practices and empowering patients to help themselves to look after themselves”.

Mobile-based telehealth systems technology can enhance clinical productivity, as well as giving patients greater control over their treatment, according to Dr David Morgan (consultant surgeon at the Heart of England NHS Foundation Trust, and founder/medical director of Safe Patient Systems). “What we really need is a paradigm shift,” Dr Morgan said, “to move towards something that is very much more patient-centric, about empowering patients to jointly make decisions so that they’re better informed…that can be achieved by the implementation of technology”.

Mr Mark Smith (Group Commercial Director of private healthcare provider Healthcare at Home Ltd.) spoke of the importance of private sector involvement in future NHS programmes. He gave the example of the Family Liaison Service in palliative care, which Healthcare at Home was commissioned to run by Birmingham East and North PCT. The service provided trained care coordinators and a 24/7 call-line staffed by nurses. 83% of people on the programme who have died did so in the place of their choosing, Mr Smith said: “a dramatic difference to the national picture”. He asserted that clinicians should embrace “the degree of innovation and change the private sector can create at speed”.

With the controversial issue of commissioning covered, the meeting moved on to an examination of topical clinical issues. Topics ranged from venous thromboembolism (VTE) and atrial fibrillation (AF), to heart rate control and the new NICE guidance on hypertension.

VTE currently does not receive enough clinical attention, said Professor David Fitzmaurice (Clinical Lead for Primary Care Clinical Sciences, University of Birmingham), citing figures from the Health Select Committee for the House of Commons, which show that of an estimated 60,000 VTE deaths per year in the UK, two thirds are due to hospital admission, of which 25,000 are preventable. “The statistic you will hear quoted quite a lot,” Professor Fitzmaurice said, “is that hospital acquired VTE kills more people in the UK than breast cancer, road traffic accidents and HIV/AIDS combined,” challenging his audience to debate whether primary care has a role in preventing it.

The fact that air travel increases the chance of deep vein thrombosis in some hyper-responders with other risk factors, was highlighted by Dr Patrick Kesteven (Consultant Haematologist, Newcastle Hospitals Trust) who reviewed studies in this area.

Looking at danger of strokes related to AF, Dr Andreas Wolff (Primary Care Lead for the North of England Cardiovascular Network) spoke on the superior efficacy of the CHA2DS2-VASc risk score, “particularly for the low risk patients, where you have the biggest problem in deciding if they need antithrombotic therapy or not”. He also speculated that novel anticoagulants may further shift the threshold for the low-risk category in future.

Drs Julian Halcox (Consultant Cardiologist, University Hospital of Wales) and Kathryn Griffith (PCCS President and Clinical Cardiovascular Lead for North Yorkshire and York Primary Care Trust) gave an overview of significant trials published over the past year, including the efficacy of omega-3s and cholesterylester transfer protein (CETP) inhibitors in CVD treatment, as well as those presented at this year’s annual meeting of the European Society of Cardiology in Paris.

An overview of the new NICE guideline on hypertension was given by several members of the guideline development group, led by former PCCS chair Dr Terry McCormack(Cardiovascular Lead for North Yorkshire and York Primary Care Trust). Key updates included the superiority of 24-hour ambulatory blood pressure monitoring (ABPM) for confirming hypertension, updates to the drug treatment algorithm, and the introduction of different blood pressure targets for patients over and under 80 years of age.

Many other informative sessions including mini masterclasses, heart rate control in the community, and a ‘Dragon’s Den’ looking at oral anticoagulants, all combined to make the meeting a great success with delegates. The Society’s goal is to encourage communication and knowledge exchange between primary care clinicians. Referring to the previous day’s talks on NHS reform, Dr Griffith acknowledged that “we’re going to have some trials and tribulations on the way” but she closed the meeting with hopes for “a good year to come” with the society sailing “the good ship PCCS through better waters”.