Invasive coronary angiography (ICA) is an important diagnostic test in the diagnosis of coronary artery disease (CAD). However, it is associated with a small risk and is a relatively expensive procedure. National Institute for Health and Care Excellence (NICE) 2010 guidelines on stable chest pain recommended that patients with stable chest pain and high probability of CAD should be investigated with ICA. 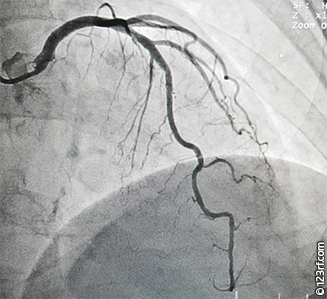 Invasive coronary angiography (ICA) remains the cornerstone of diagnosis and treatment of patients with a high likelihood of coronary artery disease (CAD), or those with significant or unstable chest pain symptoms. However, there is always a concern that we overutilise ICA and this exposes patients to a small risk.1 Furthermore, ICA is an expensive procedure and overuse of diagnostic ICA can compete with percutaneous coronary intervention (PCI) and device implantations in hospitals with a single catheter lab.

The National Institute of Health and Care Excellence (NICE) 2010 guidelines on stable chest pain, recommended that patients with stable chest pain should be assessed for the probability of having CAD, using a risk score.2 They recommended that patients with a high pre-test probability (PTP) of CAD should go directly to ICA, while those patients with mild and moderate PTP should be investigated non-invasively with cardiac computed tomography (CT) and functional imaging tests such as stress echocardiography (SE) and myocardial perfusion scintography (MPS). NICE guidelines have just been updated and now recommend CT coronary angiography (CTCA) for all patients with recent-onset stable chest pain.3 The PTP risk score is no longer to be used as it was found to overestimate likelihood of CAD.

We audited our own practice at a district general hospital (DGH) with a single catheter lab to assess the yield of significant CAD at ICA in patients presenting with stable chest pain, mostly via rapid access chest pain clinics (RACPC), and patients presenting with acute coronary syndromes (ACS). We also wanted to assess the performance of the newly introduced high-sensitivity troponin. Our hypothesis was that high-sensitivity troponin would lead to a large number of false-positive ACS cases due to the higher sensitivity of the test. We compare our results to published registries.4,5

We reviewed all patients presenting to the cath lab for ICA over a 12-month period, starting from the first of January 2015, whether as outpatient elective referrals or inpatient ACS. All patients with known CAD based on previous ICA, or those presenting for staged secondary PCI procedures were excluded, as were any patients presenting for other indications such as work-up for valve surgery, or investigation of cardiomyopathy or ventricular arrhythmias.

We collected demographic and risk factor information. The use of any non-invasive tests for ischaemia (exercise electrocardiogram [ECG], SE, or MPS) or CTCA, prior to referral for ICA from RACPC or general cardiology clinics was also documented. For those undergoing ICA in the setting of ACS, we documented the maximal troponin value (HS-cTnT with a normal cut-off value of <14 ng/L). The patients were divided into those with a negative troponin (<14 ng/L), mildly elevated troponin (14–100 ng/L), moderate troponin rise (101–500 ng/L) and significant troponin rise (>500 ng/L).

We divided the ICA outcomes into three categories of severity on the basis of the reports completed by the cardiologist at the time of carrying out the procedure. These categories were:

The total number of ICA performed in the 12-month period was 1,116. After applying the exclusion criteria, the total number of patients was 707. The mean age of the cohort was 64 years and 56% were male. There were 457 elective outpatients and 250 were inpatients undergoing ICA for ACS. The incidence of severe CAD in the whole cohort was 41%, with a further 20% found to have moderate CAD and 39% had normal coronary arteries or mild atheroma only. As would be expected, there was a higher prevalence of severe CAD in male patients and relatively fewer risk factors in patients with mild CAD (table 1). When we divided the cohort into elective outpatient and ACS subgroups, the yield of severe CAD was higher in the ACS group, with 55% of patients having severe CAD compared with 33% in the elective stable chest pain group (figure 1).

Our findings show that, in all patients undergoing ICA, who are not previously known to have CAD, 41% were found to have severe CAD. This figure is marginally better than the findings from a very large US-based registry, which found that 37.6% of patients without known CAD who underwent elective ICA had obstructive CAD.3 However, the US registry was of elective patients only. When we subdivided our cohort into elective and ACS, our yield of severe CAD in the elective stable chest pain subgroup was only 33% compared with 55% in the cohort of patients presenting with ACS. In another registry based on data from a UK DGH, Reid et al. reported a yield of 46% of severe CAD, which is comparable to our yield.5

It is debatable whether a yield of 33% of severe CAD in patients with stable CAD is low, considering that, in addition, a further 22% were found to have moderate CAD. This is particularly true given that it has been known for some time that the size of plaque stenosis is a poor predictor of cardiovascular events and, rather, it is certain defining characteristics of vulnerable plaques that render them more likely to lead to adverse events.6,7 As such, the detection of moderate CAD in these patients who have been specifically selected for angiography, based on symptoms and risk factors, cannot be ignored and  should prompt an aggressive secondary prevention strategy.

We are unable to assess the effectiveness of non-invasive imaging tests as gate keepers to ICA in this cohort, as only 127 (27.8%) of the stable chest pain cohort had non-invasive tests prior to ICA. Considering that our RACPC sees over a 1,000 patients per year, it would appear that the non-invasive tests are effective as gate keepers. Furthermore, the non-invasive imaging functional tests generally have a high sensitivity and hence yielded a proportion of patients with moderate CAD at ICA. These patients are subsequently treated medically for their mild ischaemia and stable CAD. Similarly, while the yield of severe CAD from CTCA was only 39%, there was a further 30% who had moderate CAD and, hence, it can be argued that CTCA also did reasonably well as a gate keeper to ICA. It can be argued of course, that patients with moderate stenoses on CTCA should be investigated with functional tests first and, only if found to have ischaemia, they should proceed to ICA. There were examples of our clinicians using nuclear stress test before ICA, but the numbers are too small to fully assess the impact of this and some would consider it to be layering of investigations, where clinicians are requesting multiple non-invasive tests before still requiring ICA.

Of the stable chest pain cohort, 72% were direct referrals to ICA with a 30% yield of severe CAD. This could be considered a reasonable yield, when we take into account that a further 20% were found to have moderate CAD, but this still means that 50% of the patients going directly to ICA had normal arteries or mild atheroma (table 2). This is a reflection of the NICE 2010 guidelines and the PTP risk score which significantly overestimated likelihood of CAD.8,9

As would be expected, we found a higher prevelance of severe CAD in the ACS patients with higher troponin values (figure 2). Although the aim of introducing a higher-sensitivity assay is to aid quicker detection and quicker rule out of ACS, in patients presenting to the emergency department with chest pain,10-12 the use of a high-sensitivity troponin assay does come with the drawback of a higher number of false-positives, which is a direct consequence of the fact that a higher sensitivity will inevitably result in a reduced specificity.13,14 Finally, sound clinical judgement was also demonstrated in the ACS subgroup of patients, with 48% of the troponin negative ACS patients referred for ICA found to have severe CAD.

In conclusion, our data show that overall detection rate of severe CAD in patients presenting with stable chest pain, at ICA, is relatively low. This is at least in part a reflection of the NICE 2010 guidelines which recommended that patients with high PTP should be investigated directly with ICA. It will be important to re-evaluate the yield of severe CAD at ICA, once the new NICE guidelines, which recommend CTCA on all patients with new onset stable chest pain, are implemented.