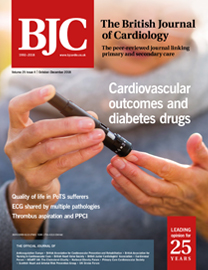 Implications of Brexit for medical research

In September last year, the Scottish Cardiac Society (SCS) celebrated its 25th anniversary with a two-day symposium held in Crieff – the same venue where the inaugural meeting took place in 1992.

Transitions of an open-heart surgery support lab in a resource-limited setting: effect on turnaround time

Open-heart surgery is a major surgical procedure that requires intensive patient monitoring. Clinicians require prompt laboratory test results to assist them in this monitoring. Timeliness of result delivery is of great importance in taking prompt clinical decisions. We set out to evaluate the performance of the support laboratory before and after domiciliation at the cardiac centre using turnaround time (TAT) of electrolytes and liver function tests as benchmarks.

This hospital-based descriptive study was carried out at the University of Nigeria Teaching Hospital (UNTH), Enugu. The authors conducted a desk review of laboratory records for electrolytes and liver function tests from March 2013 to July 2017. Relevant laboratory personnel were also interviewed to ascertain types of equipment used and possible causes of delay at different stages of transition during the period under review. The TAT was calculated as the time from sample reception to time of dispatch of results.

In conclusion, we were able to demonstrate improvement in performance of the support laboratory as shown by a reduction in TAT following the transition from the main laboratory to being domiciled in the cardiac centre.

This is a case series of 10 patients who presented with the same electrocardiogram (ECG) manifestation of new-onset giant T-wave inversion and QT prolongation over a period of 24 months in a district general hospital. This unique ECG manifestation has been described with several cardiac and non-cardiac conditions.

Stunned myocardium is a rare, but serious, medical condition, and requires emergency intervention. Short periods of hypoperfusion may lead to a prolonged cardiac hypokinesia (hours to days), even though the perfusion is retained eventually. In other words, although the coronary circulation is retained, the hypokinesia remains. It might be considered as a case of prolonged post-ischaemic dysfunction.

In conclusion, rapid diagnosis and treatment are essential for stunned myocardium, as these could change the progress of the clinical condition.

A 55-year-old man with suspected community-acquired pneumonia and atrial fibrillation was found to have a very large left atrial myxoma complicated with a pulmonary triad – pulmonary hypertension, pulmonary infarction, and pulmonary lymphadenopathy. The myxoma was successfully removed and complete resolution of all three pulmonary complications followed. He re-presented two weeks post-surgery with atrial flutter, which was medically treated and considered for ablation. We have taken the opportunity to undergo a mini-literature review on myxoma and its pulmonary complications.

Furthermore, traditionally, the aetiology of heart failure or left ventricular (LV) dysfunction was investigated with diagnostic invasive coronary angiography. More recently, cardiac magnetic resonance imaging (MRI) tissue characterisation was proposed as an effective alternative test. We conducted a survey of UK cardiologists’ opinions on the use of CTCA in patients with stable chest pain and in the investigation of the aetiology of heart failure.

The study sought to evaluate the indications, image quality, safety and impact on patient management of cardiac magnetic resonance imaging (CMR) in a district general hospital setting.  The database was developed using retrospective analysis of patient records from the start of the local CMR service in January 2014 until January 2017. All 791 consecutive patients were included in the dataset.

The most important indications were the investigation of myocarditis/cardiomyopathies (54.5%), work-up of suspected coronary artery disease (CAD)/ischaemia (27.1%), and assessment of viability (9.1%). Image quality was diagnostic in 99.9% of cases. Mild adverse effects were reported for 3.8% of patients for stress CMR and in 1.1% of non-stress CMR. No serious adverse events were reported in this study population. In 26.5% of cases, CMR findings resulted in therapeutic modifications. In 18.1%, the final diagnosis based on CMR was different to that suspected before the CMR.

In conclusion, the findings of this study emphasise that CMR is a safe procedure with high image quality. In many cases, CMR can be shown to change a patient’s management plan.

Hypertension in pregnancy as the most influential risk factor for PPCM

Peri-partum cardiomyopathy (PPCM) is one of the leading causes of maternal mortality worldwide, but the exact cause of PPCM is still unknown. PPCM is often associated with many risk factors, especially hypertension in pregnancy. This study aimed to evaluate the most influential risk factors of PPCM in Javanese ethnic patients.

The study was a case-control study involving 96 PPCM patients and 96 healthy non-PPCM parturients (control group) in the Hasan Sadikin Central General Hospital, West Java, Indonesia in the period from 2011 to 2014. A multiple logistic regression analysis was performed to evaluate the most influential risk factors for PPCM.

The clinical presentation of patients with cardiac tamponade largely depends upon the length of time over which pericardial fluid accumulates and the clinical situation. It can result in a clinical picture ranging from cardiogenic shock to general malaise, including dyspnoea, chest discomfort or fullness, peripheral oedema and fatiguability.

Although cardiac tamponade is a clinical diagnosis, two-dimensional and Doppler echocardiography play major roles in the identification of pericardial effusion and in assessing its haemodynamic significance. Despite this, some other imaging techniques or diagnostic tools could also be used for diagnosis. With this case we want to highlight not only the role of the electrocardiogram (ECG), but also its utility in assessing the haemodynamic changes in this clinical entity.

Advancements in computer and transducer technologies over the past two decades have allowed the development of three-dimensional (3D) echocardiography (3DE), which offers significant additional clinical information to traditional two-dimensional (2D) echocardiography (2DE). However, the majority of departmental studies today remain 2D, and adoption of 3DE as a complementary tool into mainstream clinical practice has not been without its difficulties. Although cardiologists have a range of alternative imaging modalities at their disposal to investigate cardiovascular structure and function, given the pace of technological innovation and improvements in data analysis, the field of 3DE is one of great expectation and is likely to be of increasing clinical importance. In this review, we discuss the role of 3DE, its advantages and limitations, and how novel technology will help workflow and expand its routine use.

Refractory angina (RA) is characterised by persistent anginal symptoms despite optimal medical therapy and revascularisation. Enhanced external counterpulsation (EECP) is a technique that has shown promise in the treatment of this condition but is poorly utilised in the UK. The aim of this study is to assess the effect of EECP on anginal symptoms in patients with RA from a UK centre.

Our study demonstrates use of EECP to be associated with significant improvements in exercise capacity and anginal symptom burden.

A study in the diagnosis and management of syncope: a retrospective review

A study of 500 patients was conducted to ascertain how syncope is managed at the Ipswich Hospital NHS Trust. This was based on the variation in approach across the country despite the guidance from the European Society of Cardiology (ESC), National Institute for Health and Care Excellence (NICE) and the Heart Rhythm Society. Similar studies in the UK have indicated a number of inconsistencies in both the management and diagnosis of patients with suspected syncope.

We discuss the role of a syncope pathway, the need for a separate syncope clinic and for syncope experts.

A retrospective analysis of 50 inpatients admitted with syncope was undertaken to evaluate the safety and cost-effectiveness of a novel outpatient syncope clinic recently introduced within an emergency ambulatory care unit at a northwest London hospital together with review of echocardiographic parameters in syncope. Outcome measures included length of inpatient admission, frequency of cardiology review, 30-day readmission and 90-day mortality rates. The same variables were assessed prospectively in 50 inpatients referred to the syncope assessment unit (SAU). All 100 patients were deemed low risk, as defined by the San Francisco syncope rule. Patients under the age of 18 years and those investigated for conditions other than syncope were excluded. Echocardiographic parameters such as E/A ratio, left atrial (LA) dimension, left ventricular (LV) ejection fraction and E/E′ ratio were statistically analysed for their association with episodes of syncope.

The standard-care group remained in hospital for a median four days at a cost of €582 (£512). Waiting time for an SAU appointment was a median two days. Inpatient waiting time for 24-hour Holter and transthoracic echocardiography (TTE) investigations were significantly longer for the standard-care group (p<0.05). There was no significant difference in the rates of cardiology review, diagnostic yield, hospital readmission and mortality between the two groups. The SAU will save a projected annual cost of €108,371 (£95,232) on inpatient bed days. The fractional cost of clinical assessment on the SAU is €35 (£31) per patient. Among the echocardiographic parameters analysed, increased E/E′ ratio was associated with syncope (p=0.001).

In conclusion, the introduction of a novel low-risk SAU promotes early discharge from hospital with prompt outpatient medical review and shorter inpatient waiting times for diagnostic investigations. Our data suggest this is both cost-effective and safe. E/E′ echo parameter was observed as a significant parameter in low-risk syncope.

News from ESC 2018: Not all HDL cholesterol is cardioprotective

Very high levels of high-density lipoprotein (HDL), the lipid that has been considered ‘good’ cholesterol, may be associated with an increased risk of...

Rivaroxaban, the direct oral, factor Xa inhibitor, does not reduce the risk of a composite end point of survival, myocardial infarction (MI) and...

The use of the oral anticoagulant rivaroxaban in medically ill patients for 45 days following hospital discharge showed there was no significant difference...

News from ESC 2018: Is it safe for women with heart disease to become pregnant?

“Usually”, appears to be the answer according to 10-year results from the Registry Of Pregnancy And Cardiac disease (ROPAC) a worldwide, prospective registry...

‘All you need to know about heart failure – in one day’ was the promise of the 10th British Society for Heart Failure...

This year’s meeting of the European Society of Cardiology (ESC) was held in Munich, Germany, from 25th–29th August...