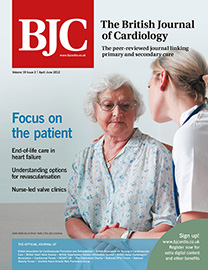 Following publication of recent National Institute for Health and Clinical Excellence (NICE) guidance for the management of chronic heart failure (CHF), which includes heart failure rehabilitation incorporating exercise, there has been a substantial amount of rhetoric and debate on how to deliver this specific intervention.1 In theory, amelioration of heart failure patients into existing cardiac rehabilitation (CR) exercise programmes appears the most feasible option in practice, however, this may prove to be somewhat problematic.

What do angina patients understand of options for myocardial revascularisation?

Patient knowledge and understanding of their condition is important in every field of medicine. It is particularly relevant in cardiology where choices between treatment options must be made and where patient participation in prevention of disease progression is a key part of therapy. In this study, knowledge and understanding of angina patients on options for revascularisation was explored. The aim was to reveal trends that may identify opportunities to improve care. This was a qualitative study utilising depth semi-structured interviews of angina patients who have had revascularisation (excluding primary percutaneous coronary intervention [PCI] for ST elevation myocardial infarction). The main outcome measure was patient perception on revascularisation options. It was conducted in an out-patient setting at the cardiac prevention and rehabilitation centre at Charing Cross Hospital, West London. Angina patients are referred to the centre before and after their revascularisation for rehabilitation and education sessions. Several themes emerged from this study. First, patients are not fully aware of angina pathophysiology. Second, awareness of options for angina treatment is limited and their understanding heavily relies on the recommended option of the doctor. Other options are only briefly mentioned by healthcare professionals, and patients tend to turn to other sources, such as the internet and family/friends, for information. Despite the lack of understanding, all patients were happy with the way their treatment was chosen and were not too concerned about the level of information they had received. In conclusion, patients have limited understanding of angina and options for treatment but are generally satisfied with their care. However, it is likely that impaired patient understanding will impact on their ability to maintain secondary prevention, especially lifestyle changes and medication concordance.

We previously reported retrospective data on the place of death for people with heart failure (HF) known to heart failure nurse specialists (HFNS) working in two integrated cardiology palliative care teams. Here, we present prospective data on place of death, the supportive services accessed, and the role of HFNS. We collected prospective data on all patients known to the HFNS, who died during one year (n=126): length of HFNS involvement; planning for end-of-life care; preferred and actual place of death; services accessed. Outcomes were compared for the two teams. The Surprise Question was applicable in 70% of patients; 89% of whom died within 12 months. Overall, 33% died in hospital. Planning for end-of-life care was evident for 64% and half were referred for specialist palliative care; mostly initiated by HFNS. Preferred place of death was achieved for 61%. Home death was more common where there was greater access to hospice-at-home and Marie Curie nurses. Hospital death was least likely in the team with an out-of-hours palliative care telephone service. In conclusion, recognition and planning for the end of life is possible for many with HF. HFNS were central in discussing patients’ concerns, providing and coordinating end-of-life care.

Routine follow-up for patients with prosthetic valves: the value of a nurse-led valve clinic

To see whether a nurse-led clinic might be useful we audited how often patients discharged from follow-up were elsewhere seen in the community and how often events were picked up in patients being seen in a nurse-led valve clinic. We audited patients implanted with an OnX bileaflet mechanical heart valve between 1999 and 2010 by postal audit asking for details of follow-up and adverse events. We also analysed the outcome and adverse events from our nurse-led clinic over 30 months between 2009 and 2011 using our valve clinic audit database. There were 188 OnX patients of whom only 125 (66%) were receiving regular cardiology follow-up. Of those in regular follow-up, there were 16 (13%) valve-related adverse events, and this was similar to those not receiving follow-up, 9 (14%). Only 126 (67%) had regular dental surveillance. In the valve clinic, there were 199 visits by 132 patients. Echocardiograms were required on eight visits (4%). There were three hard events (as defined by International Guidelines), 19 visits (10%) revealed adverse events requiring a cardiologist and six (3%) revealed events not requiring a cardiologist. In conclusion, a nurse-led clinic provides effective long-term monitoring of valve patients. Large proportions of patients are discharged from cardiology/surgical units and are at risk of adverse valve-related events

With conflicting findings from studies of omega-3 fatty acids in cardiovascular disease, many healthcare professionals are uncertain of whether they show any benefit. BJC seminars are held to promote evidencebased practice and we recently convened a meeting of UK professionals working in cardiovascular disease to review the evidence for omega-3 fatty acids supplementation, as well as review some of the data relating to dietary fish oils. The panel considered how supplementation with omega-3 fatty acids might be used in the future. The meeting was sponsored with an unrestricted educational grant from Abbott Laboratories.

Drugs for diabetes: part 9 prescribing for patients with cardiac disease

Up to one-third of patients with heart disease have diabetes. Cardiological status should be considered when deciding on treatment for diabetes. Patients with stable coronary disease can be treated with metformin, sulphonylureas or pioglitazone. Following an acute coronary syndrome, intensive insulin therapy with multi-dose insulin has been shown to reduce mortality, and longerterm treatment with pioglitazone may reduce recurrent events. There is little trial information for glycaemia control in patients with chronic heart failure, and metformin and insulin are both frequently used. Dipeptidylpeptidase-4 (DPP-4) inhibitors are new oral antidiabetic drugs, which are weight neutral, and the injected glucagon-like peptide-1 (GLP-1) receptor agonists reduce weight. Long-term outcome studies are awaited to see if they have cardiovascular advantages in any particular group of patients.

Pacemakers are being implanted with increasing frequency. As with every procedure, there is the potential for complications. There are little recent data on implant complications and consequently we may be misinforming patients when we consent them.  Data from all pacing procedures performed from February 2007 to January 2010 were analysed retrospectively. All chest X-rays and their reports were inspected for pneumothoraces and lead displacements. Correspondence to our local pacemaker extraction centre was used to identify patients with pacemaker infections requiring extraction. Discharge summaries were also used to identify patients with other complications that were not discovered by the above methods. A total of 1,286 procedures took place over the three-year period. There were a total of 94 (7.5%) complications. Lead displacement was the most common complication occurring in 39 (4.8%) procedures requiring leads. Pneumothorax occurred in 30 (3.7%) patients. Infection occurred in 19 (1.5%) patients. Perforation occurred in three (0.37%) patients. These are unselected data from a high volume district general hospital (DGH). Infection rates are low. Lead displacement rates are higher than other similar studies. Pneumothorax rates are also high, reflecting the fact that almost all access is via the subclavian vein.

We present a case of a 55-year-old female with a successfully reperfused myocardial infarction in whom Dressler’s syndrome was subsequently diagnosed. There have been no reported cases in the literature of Dressler’s syndrome following documented early coronary reperfusion, and its continued existence in the era of reperfusion has been questioned. In conclusion, this case demonstrates that this syndrome is still a possibility in the current realm of thrombolysis and cardiac catheterisation.

In a new position paper, the European Society of Cardiology welcomes the new oral anticoagulants for use in atrial fibrillation (J Am Coll Cardiol...

A new angiotensin receptor blocker (ARB), azilsartan medoxomil (Edarbi®, Takeda) has been launched in the UK for the treatment of hypertension. It is the...

Ivabradine (Procoralan®, Servier) has been approved for use in heart failure. The licence has been granted for use in patients in New York Heart...

News from the American College of Cardiology Scientific Session 2012

Highlights of the recent American College of Cardiology (ACC) meeting, 24th–27th March 2012, held in Chicago, USA, included a study showing the benefit of...

We continue our series in which Consultant Interventionist Dr Michael Norell takes a sideways look at life in the cath lab… and beyond. In...

Society for Cardiovascular Magnetic Resonance Cardiovascular magnetic resonance (CMR) is playing an increasing role in the diagnosis and classification of heart disease, with as many...