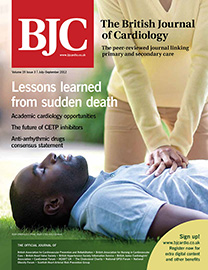 The hearts of the medical, sporting and lay communities were captured by the public cardiac arrest of 24-year-old midfielder Fabrice Muamba, during a football match in March 2012. His case was exceptional in that he survived because expert help was at hand immediately but, sadly, most young victims of sudden cardiac arrest do not live to hospitalisation. There are approximately 60,000 cases of sudden cardiac death in the UK each year,1 the majority of which occur in older adults and are predominantly attributed to ischaemic heart disease or heart failure. In contrast, there are around 600 sudden deaths per annum in young people affected by inherited structural and electrical disorders of the heart, notably the cardiomyopathies and ion channelopathies.2

The future of CETP inhibition – still to be REVEALed

In this issue (see pages 126–33), Paul Durrington has written an excellent review of one of the most interesting conundrums in current clinical lipidology – the putative role of cholesteryl ester transfer protein (CETP) inhibitors.

Translating regulatory advice into practice: use of dronedarone and older anti-arrhythmics in AF management

There is a lack of clarity around the current use of anti-arrhythmic drugs (AADs), highlighted by the recent changes to the European Medicines Agency (EMA) and US Food and Drug Administration (FDA) recommendations for dronedarone use, which were in response to the early termination of the Permanent Atrial Fibrillation Outcome Study Using Dronedarone On Top Of Standard Therapy (PALLAS) trial due to increased mortality in the dronedarone arm. A UK- and Ireland-based multi-disciplinary expert group was convened by Sanofi*, the manufacturers of dronedarone, to address the need for guidance in the practical implementation of guidelines for AADs. This position statement provides the group’s evidence-based recommendations for the practical use of AADs and dronedarone in particular. Since AADs are not always used in line with recommendations, the guidelines for the use of AADs, and the evidence base supporting them, are reviewed. The current recommendations for dronedarone use are set within this context. On consideration of the evidence, the recommendation for dronedarone use is for the maintenance of sinus rhythm in non-permanent atrial fibrillation (AF) patients, without severe heart failure, or amiodarone-related liver or lung toxicities, and with appropriate anticoagulation. Given that there have been no new AADs available in 25 years to address the need for an effective anti-arrhythmic with reduced side effects, dronedarone has a place in the treatment of non-permanent AF to provide options for clinicians and patients.

* Further detail of Sanofi's support is declared in the conflict of interest statement at the end of this article.

We present a 37-year-old man who underwent coronary artery bypass grafting for severe left main stem stenosis and right coronary artery disease and was found to have left pleuropericardial agenesis with luxation of heart to the left in the left common pleuropericardial cavity. Although complete absence of pericardium is found in one out of 14,000 patients, agenesis of left pericardium as well as left pleura is extremely rare. Despite a number of related and unrelated pathologies having been described with this condition, there are only two or three reports of co-existence of coronary artery disease. We describe the technicalities of coronary artery surgery in this condition and also review the literature for clinical diagnosis, associated conditions and complications.

Despite statin use to lower low-density lipoprotein cholesterol, a residual cardiovascular risk remains in dyslipidaemic patients, particularly when high-density lipoprotein (HDL) levels are low. Increased cholesteryl ester transfer protein (CETP) activity is a major determinant of low HDL-cholesterol. CETP inhibition with anacetrapib, evacetrapib and dalcetrapib produces plasma HDL increases of approximately 140%, 80% and 30%, respectively, in patients already receiving statin therapy. However, recent research challenges whether raising HDL-cholesterol is in itself beneficial unless anti-atherogenic properties of HDL, such as cholesterol removal from arterial walls, stimulation of endothelial nitric oxide production or protection against oxidation and inflammation, are enhanced. Potentially important differences are emerging in the mechanisms by which CETP inhibitors operate, which may lead to variation in their anti-atherogenicity unrelated to the changes in HDL-cholesterol they induce. The outcome of clinical trials with CETP inhibitors may thus depend on the mechanisms by which they inhibit CETP. This review discusses clinical implications of CETP inhibition.

We report the early and late results of coronary artery bypass graft (CABG) for protected and unprotected left main coronary artery (LMS) stenosis in an era of growing interest in LMS stenting.

We identified 1,707 patients who had CABG for LMS stenosis between February 1996 and December 2009, and compared their clinical characteristics and outcomes with a contemporaneous group of 6,260 people with non-LMS disease. A subgroup analysis of protected versus unprotected LMS cohorts was also performed. Follow-up data were 99.9% complete.

Does CT coronary angiography have a role in the evaluation of patients with CABG?

Multi-detector computed tomography coronary angiography (CTCA) is now an established highly effective non-invasive test in patients with chest pain and a low-to-intermediate pre-test likelihood of having coronary artery disease (CAD), as it has excellent sensitivity and negative predictive value (NPV).1 The limiting factors for CTCA are fast or irregular heart rate, a very high body mass index (BMI), the presence of extensive calcium in the coronary arteries and radiation. Recent introduction of prospectively gated acquisition in CTCA, where the acquisition is limited to 10% of the cardiac cycle at end-diastole, has dramatically reduced the radiation dose to 2–3 mSv for CTCA of the native coronary arteries, but this is only possible in patients with a regular rhythm below 60 bpm. Otherwise, retrospectively gated CTCA with electrocardiographically controlled tube current modulation (ECTCM) during the cardiac cycle keeps the dose below 10 mSv. The CTCA scan range in patients with coronary artery bypass grafts (CABG) is from the level of the subclavian arteries to below the diaphragm, which is twice the length of a CTCA for the native coronary arteries, and, hence, doubles the radiation dose. However, while the low-dose prospectively gated CTCA technique may not be possible in all patients having CTCA of the native coronary arteries, the minimal motion of the grafts means that CABG patients can be adequately imaged even with higher or irregular heart rates or higher BMI with the low-dose technique. The American College of Cardiology (ACC) has recently published appropriateness criteria for the use of CTCA, which included the use in patients with recurrent symptoms after CABG.2

Lessons learnt from a tragic loss – but will things improve?

The very public resuscitation of a premier league footballer drew nationwide attention to fatal dysrrhythmias in the young. Survival was achieved by effective bystander cardiopulmonary resuscitation (CPR), rapid transportation and targeted resuscitation in a cardiac centre. In Emergency Departments in the UK, resuscitation from shockable dysrrhythmias follows the Advanced Life Support (ALS) protocol, using biphasic defibrillation (150–200 J) with subsequent adrenaline boluses and amiodarone. In patients with hypertrophic cardiomyopathy or primary ventricular arrhythmias without structural heart disease, high energy defibrillation (up to 360 J) is sometimes required and catecholamines predispose to recurrent dysrrhythmia.1 On occasion, more can be learnt from failure than success. For this reason we present the following case.

The European Society of Cardiology (ESC) has published two new guidelines – ESC Guidelines for the diagnosis and treatment of acute and chronic heart...

HDL particles may be key to risk

With all the recent controversy about whether raising high-density lipoprotein (HDL) is actually a worthwhile strategy in the battle against heart disease, a new...

Tougher government policies on diet could prevent 30,000 cardiovascular deaths a year in the UK, according to a new study. Moves suggested include banning...

Physical inactivity is responsible for 6% of the worldwide burden of coronary heart disease and 7% of type 2 diabetes cases, as well as...

A new study of the polypill has shown large reductions in blood pressure and cholesterol levels, which if maintained long-term could translate into a...

New data from the RE-LY trial show that dabigatran is associated with similar rates of bleeding and thrombotic complications to warfarin in patients who...

The National Institute for Health and Clinical Excellence (NICE) has issued its final appraisal determination (FAD) on the use of rivaroxaban, as an alternative...

I guess that’s why they call it ‘The Blues’

A career in academic cardiology

Optimised beta blocker therapy in heart failure A gap between training and provision: a primary-care based ECG survey

Beta blockers underused in the elderly with lung disease

The underuse of beta blockers in elderly patients with lung disease was highlighted at the recent British Society for Heart Failure (BSH) 4th annual...