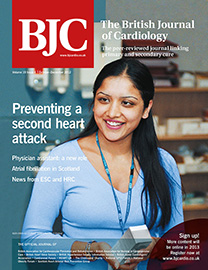 The British Hypertension Society (BHS) was established in 1980 by a group of physicians interested primarily in research. Over the years it has broadened its remit to encompass teaching and the development of best practice in hypertension management and cardiovascular risk prevention. Originally membership was restricted to people actively involved in research, but recently we have opened our doors to welcome other healthcare professionals (resident in the UK and Ireland) who are interested in the wider field. The majority of hypertension management in the UK is carried out by primary care physicians and nurses with increasing input from pharmacists. Many referrals to secondary care involve cardiologists. These practitioners are not sufficiently represented in the Society and, hence, we are keen for primary care health workers and cardiologists to apply for membership.

An observational study was conducted on patients with pre-existing coronary heart disease who were re-admitted to an acute district general hospital with a further acute coronary event. Their demographics, admission drug therapies and cardiovascular risk factor parameters were recorded and analysed. Of the 100 patients admitted over a nine-month period, more than a quarter of them were taking suboptimal secondary prevention drug therapies. Furthermore, a proportion of patients were not achieving adequate cholesterol, blood pressure and heart rate targets, which, in turn, may be a major contributory factor for their re-presentation to hospital.

We conducted an observational study within a cardiology tertiary centre with the aim of increasing the primary prevention implantable cardioverter defibrillator (ICD) implantation rate in line with Heart Rhythm UK (HRUK) national target.

A total of 326 patients experienced ST-elevation myocardial infarction (STEMI) over a 14-month time period and were offered incidence screening for implantation of a primary prevention ICD at six weeks according to National Institute for Health and Clinical Excellence (NICE) guidelines (TA095). There were 273 (84%) patients who completed the screening process; 26 (8%) had an ejection fraction (EF) of <35%. Two patients had an EF of <30% with a QRS duration >120 msec. Two of 22 subjects had evidence of non-sustained ventricular tachycardia on 24-hour Holter monitoring; one had a positive ventricular tachycardia stimulation test. Overall, three patients received an ICD (0.9%).

In conclusion, this process was labour intensive and had a lower than expected yield.

The objective of our study was to evaluate the impact of atrial fibrillation (AF) on secondary care costs in Scotland. Patient hospitalisation data from the Information and Statistics Division (ISD) of the Scottish National Health Service (NHS) from 2004 to 2008 were analysed to estimate trends in hospital episodes in the 5.2 million population of Scotland. The associated costs were estimated using the tariff prices in Scotland for the respective years.

Over the five-year period, AF-related hospital discharges increased by 33% compared with 20% for all cardiovascular discharges (29 and 37 per 1,000 population respectively). There were increases of: 21% in number of patients hospitalised; 27% in AF-related hospital admissions; and 15% in total patient bed days. Despite decreasing trends, mean length of inpatient stay for AF remained higher than for total cardiovascular conditions (10.9 vs. 8.7 days), as did inpatient cost per patient (£6,009 vs. £5,586). AF-related hospital costs increased from £138.9 million in 2004 to £162.5 million in 2008, accounting for 24% of all cardiovascular hospital costs. Overall, the burden of AF was higher among women and increased progressively with age.

In conclusion, AF presents a significant and increasing burden on hospital care in Scotland. At 25% of the total cardiovascular burden, AF costs are increasing relatively faster.

Improving patient access and implementation of the European Working Time Directive has proved a challenge for the National Health Service (NHS), particularly adding to workforce pressures and reducing continuity of care for patients. Innovative service and workforce redesign led to the introduction of new and extended roles based on service need. This paper outlines the introduction of one such new role, physician assistant (PA), introduced in the NHS in 2006, based on the established US PA model. UK-trained PA graduates are taking up newly created posts in primary and acute healthcare trusts and the aim of this paper is to share the first-year experience of introducing a newly qualified UK-trained PA within a busy district general hospital cardiology department, describing the internship year, achievements, limitations and how the role has evolved in line with service need. We believe the role has ideal potential in a cardiology department and, in particular, in the management of long-term chronic conditions, such as heart failure, where the number of specialist contacts with the patient can directly impact admissions, re-admissions, length of stay, adherence to medications and protocols of care positively.

A postal survey was sent to the patients who attended the nurse-led heart failure clinics more than once in the first two years of the service. There were two types of questions: multiple-choice questions and those allowing free text answers. We approached 228 patients. We received responses from 192 (84%). Of these patients, the majority (80–90%) responded positively to most of the questions. The vast majority of patients regarded the service as providing excellent care, that the staff were courteous and professional, and they were able to establish a good relationship. The negative remarks were related to facilities such as parking spaces in the hospital, and to the label of heart failure. The team endeavours to make improvements to the service.

A 26-year-old man presented with T4 adenocarcinoma of sigmoid colon, which was initially treated with a covering ileostomy and neoadjuvant chemotherapy with oxaliplatin and infusional 5-fluorouracil delivered through a right subclavian Hickman line. While receiving chemotherapy, he developed a massive right atrial thrombus, adherent to the inferior venacaval opening and the adjoining right atrial wall, mimicking a metastatic deposit, which was removed surgically on cardiopulmonary bypass. The patient subsequently underwent successful high anterior resection of the sigmoid cancer followed by adjuvant chemotherapy with oxaliplatin and capecitabine. The unusual features of this patient’s presentation include the extremely rapid growth of thrombus despite aggressive anticoagulation, the unusual site of thrombus on the inferior vena caval opening rather than around the Hickman line, and possible facilitation of thrombus formation by chemotherapeutic agents. We also discuss the diagnostic and therapeutic dilemmas in a patient with a concurrent malignancy and a right atrial mass.

News from the ESC Congress 2012

Highlights of the European Society of Cardiology (ESC) 2012 Congress held in Munich, Germany on August 25th–29th included the first ever randomised trial addressing...

This year's Heart Rhythm Congress (HRC 2012), held in Birmingham from 23rd-26th September, was the largest to date showing the growing interest in this...

The European Association for the Study of Diabetes (EASD) and the American Diabetes Association (ADA) have published new guidelines on the treatment of type...

Four years of hormone-replacement therapy (HRT) started soon after the onset of the menopause improved depression and anxiety in healthy women without promoting or...

More on diabetes risk with statins

Another study has found a slight increase in fasting glucose levels in patients at increased risk of type 2 diabetes taking statins. The study...

Lessons learnt from a tragic loss

Decision by consensus: more political correctness or a genuine improvement in care?