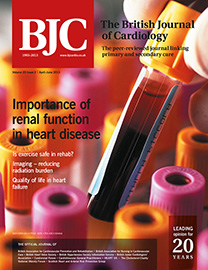 Reducing the cost of heart failure while improving quality of life

Chronic heart failure (CHF) affects 900,000 people in the UK and consumes almost 2% of the National Health Service (NHS) budget. These figures are set to rise as the prognosis of coronary artery disease improves and the population ages. Heart failure currently accounts for approximately 5% of all emergency medical admissions to hospital, and over the next 25 years the proportion will rise by 50% – largely due to an older population.1

The emergence of the CVGP

The National GPSI Cardiology Forum was established in 2005 and, despite the demise of the Primary Care Cardiovascular Society (PCCS) to which it was affiliated, it has remained active in the national cardiovascular arena. At a recent meeting at Warwick University, a decision was made to change our name to CVGP (CardioVascular General Practitioners: the Society for GPs with an interest in Cardiovascular Medicine). This name change does not alter our stated aims or direction of travel, but acknowledges the need to embrace all GPs involved in cardiovascular care rather than just GPs with a special interest (GPSIs) in cardiology. We believe this is essential in the evolving NHS clinical commissioning environment.

The SERVE-HF study: investigating the impact of central sleep apnoea on heart failure

When reference is made to sleep-disordered breathing (SDB), obstructive sleep apnoea (OSA) often springs to mind. Indeed, much research has been centred on identifying individuals at risk of OSA, determining the most effective form of therapy and unearthing the manner by which OSA increases cardiovascular disease (CVD) risk. As a result, factors such as central adiposity, neck circumference and age have been identified as OSA risk factors, and continuous positive airway pressure (CPAP) has become a well-recognised treatment for OSA. Studies also indicate that OSA may increase CVD risk via mechanisms involving tissue hypoxia and increased sympathetic nervous system activity, and that CPAP therapy counteracts these mechanisms.1 The case for the OSA–CVD link has been further strengthened by additional research showing that CPAP can reduce elevated blood pressure and reduce the risk of cardiovascular events, such as heart attack and stroke.2,3

Is training shaping up?

The Cardiology Curriculum1 describes the specialty of cardiology as a subspecialisation for physicians who were predominantly concerned with the care of patients with cardiovascular disorders. It goes on to state that care of such patients embraces a wide range of clinical activities and cardiologists need a broad view of the cardiovascular needs of individual patients and the communities in which they live, including an understanding of any prevailing health inequalities. This requires knowledge of not only the diagnostic and therapeutic modalities available, but also an appreciation of the importance of the epidemiology and potential for prevention of cardiovascular disease. Although cardiology is generally stereotyped as a highly practical skill-based medical specialty, with invasive and interventional skills as high-profile components of the workload, competence in other areas of practice such as cardiovascular clinical pharmacology and non-invasive imaging are equally important.

Incidence of stroke attributable to atrial fibrillation increases from 1.5% at age 50–59 years to 23.5% at age 80–89 years. The use of oral anticoagulants to reduce the risk of stroke is well established, but all the available agents can cause bleeds if used in excess dose, in high-risk patients or in patients with reduced kidney function.

This article highlights the need to assess kidney function as stated in the newly published European Heart Rhythm Association (EHRA) of the European Society of Cardiology (ESC) practical guide on the use of the new oral anticoagulants (NOACs).1 The EHRA guide has a section on NOACs for patients with chronic kidney disease (CKD) where it is stated that “a careful follow-up of renal function is required in CKD patients, since all (NOACs) are cleared more or less by the kidney”. It continues “in the context of NOAC treatment, creatinine clearance is best assessed by the Cockcroft method, as this was used in most NOAC trials”.

The authors discuss the issues and present a simple guide on why and how to use the Cockcroft Gault equation for kidney function estimation. They also note that for drug and dosing decisions, reduced kidney function, for whatever reason (not just where a patient has been assessed as having CKD), needs to be assessed to reduce the risk of harm.

In conclusion, renal function expressed by eGFR is an independent predictor of procedural success and short-term outcomes in STEMI patients treated with pPCI, even in patients with normal serum creatinine. Thus, eGFR should be estimated in all STEMI patients to help identify a high-risk subgroup.

This study was designed to evaluate the impact of a novel iterative reconstruction (IR) algorithm on an established UK cardiac computerised tomography (CT) service. Areas assessed included image quality and effective radiation dose (ED).  A total of 250 consecutive patients with suspected coronary artery disease were enrolled as a substudy of a larger trial. Examinations were performed on a 64-channel detector CT with data sets reconstructed with the standard filtered back projection (FBP) or IR technique. Image noise was measured within predefined regions of interest (ROI), and image quality qualitatively assessed by two clinicians blinded to the reconstruction method. ED was calculated using a chest-specific conversion coefficient. Four patients withdrew. So, 246 patients (140 males) underwent cardiac CT: 124 consecutive patients underwent a routine scanning protocol, with images reconstructed with FBP, and 122 patients with IR technique. The mean estimated EDs were 6.5 mSv (FBP) and 4.3 mSv (IR) (dose savings 34%) for all patients (p<0.00001). There was no statistical difference in noise or mean attenuation between the IR and FBP images. The mean IR image quality score was 3.67 ± 1.04 compared with 3.29 ± 1.17 for FBP images (p<0.001).  IR in cardiac CT offers substantial ED reduction without compromise in image quality.

A 73-year-old woman, with a history of deep vein thrombosis (DVT) in her legs, presented two years following coronary artery bypass graft (CABG) with left internal mammary artery (LIMA), left radial artery and left cephalic vein, with a massive right atrial mass. Pre-operative work up also showed a left adrenal mass on computed tomography (CT) scan. We discuss the diagnostic possibilities within such a scenario and review the literature for right atrial masses of diverse aetiology, including right atrial myxomas, benign and malignant tumours of right atrium and right atrial thrombosis. The case is unusual on account of the concomitant history of DVT and the presence of left adrenal mass, rapid growth of the mass within two years following CABG, the atypical origin of the myxoma near inferior vena caval opening and the near total obliteration of the right atrial myxoma by rapid growth of myxoma to a massive size.

Acute heart failure (AHF) is a common cause of hospitalisation, presenting substantial economic and humanistic burden for healthcare systems and patients. This study was designed to capture proxy UK health-related quality of life (HRQoL) data for hospitalised patients with AHF.

In conclusion, collection of utility data in severe acute conditions is challenging. This study captures values through the use of proxy assessment. Data suggest that AHF hospitalisation is associated with a significant HRQoL burden and that there exists a need for development of new treatments aimed at improving hospitalisation outcomes.

In conclusion, supervised exercise testing and training are accompanied only by minor cardiovascular events and they can be carried out safely in community-based cardiac rehabilitation settings.

A ‘practical guide’ to the new oral anticoagulants that have recently become available as an alternative to warfarin for patients with atrial fibrillation has...

The European Society of Cardiology has issued a consensus statement, which says that catheter-based renal denervation can be considered a therapeutic option in patients...

TAVI use in Europe varies widely

Transcatheter aortic-valve implantation (TAVI) was performed in around 34,500 patients in 11 European countries in the first five years following European approval of the...

Tissue-engineered human organs – the next generation of treatments for chronic heart diseases – will soon become a multi-billion dollar medical market according to...

ECGs for the faint hearted

Can you tell right from left bundle branch block? Are they clinically...

News from the American College of Cardiology Scientific Session 2013

Highlights of the American College of Cardiology (ACC) meeting held in San Francisco last month included the first study to show a benefit of...

SHARPening up research in Scotland

The Scottish Heart and Arterial disease Risk Prevention (SHARP) charity has aimed to reduce and prevent premature morbidity and mortality from cardiovascular disease in...

Correspondence: feasibility of using CTCA in patients with acute low-to-intermediate likelihood chest pain in a DGH