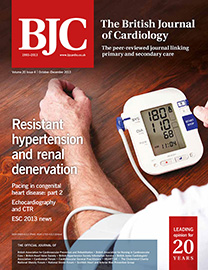 Despite the high and growing prevalence of hypertension worldwide, and the increasing attention focused on the challenge of resistant hypertension (RHTN), it is somewhat extraordinary to note the lack of data attesting to the epidemiology and management of RHTN at the present time. Few studies have described the incidence and prevalence of this condition, yet, it is very clear that, once diagnosed with RHTN, patients are at strikingly elevated risk of cardiovascular events, and thus clearly defined treatment strategies are urgently required.1 Quite remarkably, when reviewing the evidence base in RHTN for the recent National Institute for Health and Care Excellence (NICE) hypertension guidelines, the authors could find just one head-to-head randomised-controlled trial in this patient cohort, and only six retrospective cohort studies, with the largest being a post hoc analysis of the Anglo-Scandinavian Cardiac Outcomes Trial (ASCOT) study, where the use of spironolactone as a fourth-line agent was associated with blood pressure (BP) reductions of ~20/10 mmHg.2 Currently, we are hopeful that trials, such as the British Hypertension Society (BHS)-led Pathway 2 study (UKCRN.org.uk ID 4500) and the Resistant Hypertension Optimal Treatment (ReHOT) study (Clinicaltrials.gov ID NCT01643434), will help improve our drug therapy of RHTN. Nonetheless, it should be recognised that, while pharmacotherapy of hypertension is proven (at least up until the point of RHTN), issues with physician inertia, poor concordance and drug intolerance continue to undermine our efforts to get patients to target BP.

Renal denervation for hypertension: where are we now?

Hypertension is a growing clinical burden associated with significant morbidity and mortality. Those patients who remain with uncontrolled blood pressure despite multiple appropriate tablets are labelled as resistant hypertension. This cohort faces the highest risk. A key driving factor in resistant hypertension is an abnormally elevated sympathetic nervous system (SNS). It is now possible to attenuate this non-pharmacologically by performing radiofrequency ablation to the renal sympathetic nerves using a transcatheter approach. Currently available trial data show impressive blood pressure reductions with this therapy and, more importantly, its relative safety. The National Health Service (NHS) experience with this procedure is at an early stage, but is likely to grow with guidance already published by the joint British Societies and National Institute for Health and Care Excellence (NICE).

A 34-year-old Filipino computer engineer with no previous medical history presented to the emergency department with sudden onset exertional breathlessness and intermittent palpations for 10 days. He had no associated dizziness, syncope or chest pain, and no significant family history or recent travel. Blood pressure was 126/69 mmHg and pulse 104 bpm, regular with normal volume and character. The jugular venous pressure was normal. A 4/6 continuous murmur with diastolic accentuation was heard loudest at the left lower sternal edge, associated with a diastolic thrill. Electrocardiogram (ECG) showed sinus tachycardia and no other abnormality.

Recurrent syncope in head and neck cancer: a case report with literature review

A 68-year-old male with a background fhistory of squamous cell carcinoma of the epiglottis presented with recurrent syncope. During a witnessed collapse in Accident and Emergency (A&E), his heart rate decreased to 38 bpm and blood pressure dropped to 74/50 mmHg. Electrocardiogram (ECG) confirmed sinus bradycardia. Magnetic resonance imaging (MRI) of his neck revealed disease recurrence with a mass encasing the left internal carotid artery. He was diagnosed with reflex syncope secondary to mechanical stimulation of the carotid sinus. He had a dual-chamber pacemaker inserted, and re-presented with one further episode of collapse shortly afterwards. This report discusses the different options in managing this rare but debilitating symptom in head and neck cancers invading the carotid sinus.

The art of bluffing

In this new regular series ‘ECGs for the fainthearted’ Dr Heather Wetherell will be interpreting ECGs in a non-threatening and simple way. She hopes this will help keep the art alive in primary care. In this first article, she looks at ECG methodical analysis

Echocardiography is not indicated for an enlarged cardiothoracic ratio

An increased cardiothoracic ratio (CTR) on chest X-rays is a not uncommon reason for requesting echocardiography. To assess how often the echocardiogram was abnormal in patients with an increased CTR, the results of 62 open-access echocardiograms requested with this indication were analysed.

Means, standard deviations and 95% confidence intervals were calculated for the left ventricular diameters of the patient group investigated. Two-tailed t-tests were used to compare those with and without reported breathlessness, and those with additional radiology consistent with heart failure. Positive predictive values (PPVs) were calculated.

Only four echocardiograms were abnormal, giving a PPV for CTR of 6%. This increased only slightly to 15% with the inclusion of another radiological abnormality, and to 19% with a symptom or sign. We, therefore, conclude that an increased CTR alone is not a valid reason for requesting echocardiography.

We retrospectively reviewed 213 consecutive patients who were seen in the outpatient setting and had a moderate or high risk of CAD based on NICE CAD score. We compared the performance of the tests.

CTCA was performed in 107, stress echo in 67 and myocardial perfusion scintigraphy (MPS) in 39 patients. The MPS group were older (p<0.01) and had a higher incidence of risk factors (p<0.01). Of the patients undergoing CTCA, 9.4% were found to have significant CAD requiring revascularisation. Functional testing led to revascularisations in 4.7%. The higher rate of revascularisation in the CTCA cohort was not statistically significant (p=0.28).

Dual antiplatelet therapy (DAT) with aspirin and clopidogrel is recommended for up to one year following acute coronary syndrome (ACS). Gastrointestinal bleeding is the main hazard of this treatment and proton pump inhibitors (PPIs) are often prescribed in selected patients to reduce this risk. The main purpose of this study was to analyse the effect of PPIs in reducing the subsequent risk of gastrointestinal bleeding.

The medical records of 177 consecutive patients treated with DAT following ACS, were specifically reviewed for the study parameters over a 12-month period.

Out of the 177 patients, evidence of upper gastrointestinal bleeding was found in 10 patients, with the mean age of these patients being 77 years in the PPI group and 53 years in the control group. In the PPI group, endoscopy findings from six patients (6.6%) revealed gastritis in four, bleeding angiodysplasia in one, and bleeding oesophagitis in one; while the findings for the four patients in the control group (4.6%) showed gastritis in two, gastric ulcer in one and Mallory Weiss tear in one (odds ratio: 1.45, 95% confidence interval 0.39–5.32, p=0.58). None of these patients had a previous history of gastrointestinal bleeding.

In conclusion, empirical prophylactic prescription of PPIs for patients on DAT following ACS is of no significant benefit in reducing their predisposition to upper gastrointestinal bleeding. However, studies utilising larger populations are warranted to confirm this conclusion.

This year’s 8th Annual Scientific Meeting of the Cardiorenal Forum looked at clinical dilemmas in cardiorenal disease and co-morbidities. The meeting was held at...

News in brief from the world of cardiology...

Correspondence: national survey of patients with AF in the acute medical unit: a day in the life survey

Me doctor, you patient

News from the ESC Congress 2013