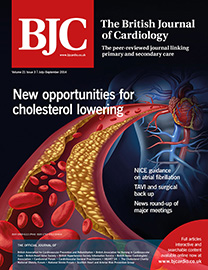 Transcatheter aortic valve implantation (TAVI) for severe aortic stenosis (AS) has expanded exponentially since it was first described 12 years ago, with around 100,000 procedures performed worldwide.1,2 Randomised controlled trials have established TAVI as the treatment of choice for severe AS in patients of prohibitive surgical risk and as a viable alternative to surgical aortic valve replacement (SAVR) in high-risk candidates.3–5 The feasibility and safety of TAVI is further supported by a large body of ‘real-world’ data from multi-centre registries with 93% 30-day and 79% one-year survival in the UK.6 Moreover, with growing operator experience and evolving valve technology, TAVI continues to expand beyond those populations originally studied, to include those with severe left ventricular dysfunction and those with failing surgical homografts (so called ‘valve-in-valve’ TAVI), for example.7,8

Lowering serum cholesterol with statins has consistently shown benefits on cardiovascular outcomes. A 1 mmol/L reduction in low-density lipoprotein (LDL)-cholesterol is associated with approximately one-third fewer coronary events and one-fifth fewer ischaemic strokes.1 However, despite these impressive results, there remains a substantial residual risk of cardiovascular (CV) events despite optimal statin therapy.2 From pooled analyses of randomised-controlled trials of statins, there is a clear relationship between the achieved level of LDL-cholesterol and the number of coronary heart disease (CHD) events. This observation applies to both primary and secondary prevention trials.3

Talking about matters of the heart

Today’s patient is potentially very different compared with only just a few years ago. So much has changed there is even a new word to describe them, the ‘e-patient’. The ‘e’ can stand for one of many things, equipped, enabled, empowered, engaged or even electronic to cover the internet-savvy approach taken by these patients. Increasing numbers of patients are ever more knowledgeable than in the past and are keen to take control of their own health as much as they can. Many walk in to your consulting room no longer just up to speed on what could be wrong with them, but also with strong opinions on the latest treatments.

The introduction of high-dose statin therapy, more potent statins and the corresponding clinical trial results have led to new treatment targets in secondary prevention of cardiovascular disease (CVD).1 Most guidelines recommend that for secondary prevention patients require a treatment goal of less than 1.8 mmol/L low-density lipoprotein (LDL)-cholesterol (LDL-C).2 While the use of high-dose atorvastatin therapy is expected to become more widespread now that atorvastatin is available as a generic drug,3 in practice, poor compliance seriously impacts effective treatment.4 Only 1.9% of patients in the Treating to New Targets (TNT) study reduced the randomised treatment of 80 mg atorvastatin to 40 mg,1 whereas, in practice, the mean dose prescribed is 32 mg per day.5 For statins, there appears to be a road-block to implementing the results of large randomised-controlled trials (RCTs), similar to the issue of treating hypertension, another ‘silent’ disease.

Provision of cardiopulmonary bypass and surgical backup during TAVI: impact on surgical services

Providing cardiopulmonary bypass and surgical back-up for transcatheter aortic valve implantation has significant implications for surgical services. It is unclear how practice varies around the UK and whether valve-type influences practice. We performed an email-based survey to gain a UK-wide snapshot of current practice. We found that bypass was available in the catheter lab in 94% of Edwards versus 30% of CoreValve centres (p=0.0003), and that a full surgical team and theatre were kept free in 89% of Edwards versus 20% of CoreValve centres (p=0.008). Further research is required to understand whether this difference in surgical provision, related to valve-type, confers outcome benefit.

Is Alice still in Wonderland of the ‘smoker’s paradox’? A meta-analysis of mortality following ACS

To determine whether the ‘smoker’s paradox’ exists in the acute coronary syndrome (ACS) population, we performed the first meta-analysis of adjusted risk estimates separately for early and late mortality. Eligible studies were comparative studies of smokers versus non-smokers enrolling patients hospitalised for ACS and reporting adjusted risk estimates for all-cause mortality.

Twenty-six risk-adjusted studies of smokers versus non-smokers enrolling >700,000 patients with ACS were identified and included. Pooled analysis suggested that smoking was associated with a statistically significant reduction in early (in-hospital or 30-day) mortality for the comparison of current versus never smokers (odds ratio [OR] 0.85; 95% confidence interval [CI] 0.75 to 0.96), any comparisons (current vs. never, former vs. never, current vs. former/never, and current/former vs. never smokers; OR 0.89; 95% CI 0.84 to 0.94), and patients with exclusive ST-segment elevation myocardial infarction (OR 0.80; 95% CI 0.73 to 0.87) and acute myocardial infarction (OR 0.87; 95% CI 0.82 to 0.92). Smoking was associated with a statistically non-significant increase in late mortality for any comparisons (hazard ratio 1.07; 95% CI 0.95 to 1.21).

In conclusion, the ‘smoker’s paradox’ for mortality may exist in the early phase following ACS but it may vanish in the late phase.

Audit of cardiac catheterisation in a DGH: implications for training and patient safety

We present an investigation into the safety of providing training in coronary angiography within a district general hospital setting.

An unusual case of endomyocardial fibrosis presenting secondary to idiopathic hypereosinophilic syndrome, diagnosed with the aid of cardiovascular magnetic resonance (CMR) imaging. This case highlights how CMR imaging is a powerful addition to current non-invasive diagnostic tools, for early clinical diagnosis of eosinophilic endomyocardial disease, and may potentially obviate the need for cardiac biopsy in the future.

We carried out an online survey of nurses who deliver rapid access chest pain (RACP) clinics and consultant cardiologists to establish current practice and response to the guidelines. Our results demonstrate that assessing PTP is now accepted as a key part of management. The first-choice investigations, at present, for low PTP patients are cardiac CT (used by 44%) and exercise tolerance tests (ETT 43%) with further use of cardiac CT limited only by availability. There is a broad range of investigations used in the medium PTP group including use of all modalities of functional imaging, ETT and cardiac CT. Cardiologists continue to use functional tests including ETT in the high PTP group, but the majority use invasive coronary angiography (ICA) as a first-line test.

This survey shows that the NICE guidelines have been broadly accepted and there are ongoing efforts to implement them, subject to availability of tests and resources. There is some disagreement with the guidelines, with some cardiologists still preferring to use the ETT in all risk groups, and some preferring to use functional imaging tests in higher risk patients, in preference to ICA.

In conclusion, there is very good uptake of the NICE guidelines on management of patients with chest pain. The reasons the guidelines are not fully implemented revolves around availability of resources, as well as a preference for functional tests for the additional prognostic information. This point is supported by the European Society of Cardiology (ESC) guidelines, which have built on and added to the NICE guidelines.

Patients admitted for elective pacemaker implant were randomised to receive wound closure with either absorbable sutures or topical tissue adhesive (glue). Procedure duration, wound closure duration and wound size were recorded. Patients were evaluated at six and 12 weeks post-implant using validated wound evaluation scores by an experienced plastic surgeon who was blinded to the closure method.

Of 122 patients enrolled, 64 received topical tissue adhesive and 58 received absorbable sutures. Patients were well matched for baseline demographics. Use of topical adhesive was associated with shorter wound closure time (117 s, interquartile range [IQR] 92–136 vs. 277 s, IQR 231–311); no difference was seen in overall procedure duration. A total of 100 subjects completed review at 12 weeks. There was no significant difference in any of the wound evaluation scores measured. There was a trend to improvement in cosmetic appearance in patients who received topical adhesive, as judged subjectively by the blinded plastic surgeon. There was no difference in adverse event rates between the two groups.

In conclusion, use of topical tissue adhesive for wound closure following permanent pacemaker implant was not superior to traditional closure techniques with absorbable sutures with regard to cosmetic outcome.

The age of no retirement?

A national campaign has been launched to debate the opportunities in a society where we are living...

We report highlights from this year’s British Cardiovascular Society 2014 Annual Conference held on June 2nd–4th 2014. Sessions from the busy programme varied from...

Towards personalised medicine was the general theme of this year’s HEART UK conference, attended by 230 clinical and nursing personnel and patients and held...

Heart failure: a practical guide for diagnosis and...

Hola Madrid! More than 1,800 clinicians and scientists from 75 countries converged on Madrid, Spain, for the 52nd annual congress of the European Atherosclerosis...

The European Stroke Conference meeting was held in Nice, France, from May 6th–9th 2014. It was a busy programme with over 1,500 abstracts presented,...