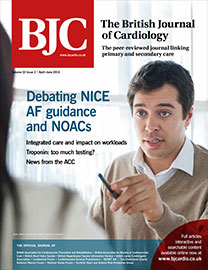 A non-fatal myocardial infarction (MI) is an inconvenience; a non-fatal stroke is a catastrophe. While this is a simplification, it draws attention to the fact that most patients with a non-ST-segment elevation MI (NSTEMI) do quite well. Conversely, most patients who suffer a non-fatal stroke suffer a massive change to their lives and their families’ lives, and experience a devastating change in their quality of life.

The new NICE AF guideline and NOACs: a response

We share Professor Brady et al.’s opinion1 that stroke prevention is the single greatest priority in the management of patients with atrial fibrillation (AF). It is reasonable to say that highlighting the inappropriately low levels of anticoagulant uptake as a major public health issue and seeking to improve anticoagulant uptake nationwide was uppermost in the minds of the Guideline Development Group (GDG) members.

The heart beats 120,000 times a day pumping 7,000 litres. Ischaemia or inflammation decimate this workload causing end organ dysfunction. New National Institute for Health and Care Excellence (NICE) guidelines for acute heart failure (AHF) acknowledge very high early mortality. Of 67,000 acute admissions, 11% die in hospital, 50% are readmitted and 33% are dead within 12 months.1,2 When cardiogenic shock ensues, prognosis is poor.3-5 Most patients are elderly but several thousand deaths occur in those under 65 years. Many are salvageable using advanced resuscitation techniques. When the prospectively randomised-controlled trial (RCT) IABP-SHOCK II trial (Intra-Aortic Balloon Pump in Cardiogenic Shock II) revealed the intra-aortic balloon pump (IABP) as ineffective, a New England Journal of Medicine (2012) editorial stated “we must move forward understanding that a condition with 40% mortality at 30 days remains unacceptable”.3,4 So do the guidelines help with this?

Integration of healthcare services has been advocated to improve quality and cost-effectiveness. Different models of integrated care for cardiology have been suggested, but the cost-effectiveness of a consultant-run service has been questioned. We assessed the potential impact on secondary-care outpatient volumes of introducing a service run by GPs with a special interest, with support from consultant cardiologists. We retrospectively reviewed all cardiology outpatient attendances at the South London Healthcare NHS Trust for a period of three months in 2011. Using National Institute for Health and Care Excellence (NICE) guidelines and discussions between cardiologists and GPs, a novel outpatient referral triage protocol was drawn-up to decide the appropriate minimum level of care required for a range of cardiac conditions. Anonymised clinic letters were divided into new referrals and follow-ups, and were assessed to establish the diagnosis and clinical complexity. Implementing such an integrated community care service (ICC) would reduce new referrals to secondary care by 33%, and would enable transfer of 44% of patients currently followed up in secondary care to ICC. The study confirms that there is scope for significant transfer of care with the greatest gains in patients with valve disease, ischaemic heart disease and atrial fibrillation.

Treatment of VTE in primary care: building a new approach to patient management with rivaroxaban

Venous thromboembolism (VTE) is a common cardiovascular disorder associated with considerable morbidity and mortality. The standard treatment for VTE comprises parenteral heparin overlapping with, and followed by, a vitamin K antagonist, which, although effective, has several limitations. Currently, many patients commence treatment for VTE in hospital and are discharged after 5–10 days to ongoing care in the community. With the introduction of non-vitamin K oral anticoagulants (NOACs), there is now the possibility for the complete management of patients with uncomplicated VTE to be undertaken by primary care, reducing the burden on hospitals and improving the patient experience. The NOAC rivaroxaban, a direct factor Xa inhibitor, has been widely approved for the treatment of VTE. This article offers guidance to general practitioners on the practical use of rivaroxaban for the treatment of patients with VTE, along with a discussion of its potential benefits compared with standard therapy.

Troponin testing is the cornerstone diagnostic test for evaluating acute coronary syndromes (ACS). Evidence suggests this test is increasingly being utilised in a less specific fashion. We sought to evaluate the appropriateness of bedside point-of-care (POC) troponin T (TnT) sampling in our hospital.

Troponin assays are requested for patients with a relatively low suspicion of an ACS. A failure to undertake further ischaemia assessment suggests a lack of initial conviction of a cardiac diagnosis. True ACS was diagnosed in less than half of troponin-positive cases. These data support a need for more selective usage.

The effectiveness of a mobile ECG device in identifying AF: sensitivity, specificity and predictive value

Early identification of atrial fibrillation (AF), especially when asymptomatic, is increasingly important when there are interventions that can reduce the risk of stroke. One mobile ECG device that has the potential for doing just that is the AliveCor® device, which is non-invasive and easy to use. We aimed to assess its utility in primary care by establishing its sensitivity and specificity, and consider the predictive value for identifying AF in a general practice population.

We used the device on a population known to have AF in order to calculate the sensitivity, and on a population who did not have AF at the time of recording, to establish specificity. Using the known prevalence of AF in a UK population, we were able to calculate the predictive values for identification of AF. All AliveCor® traces we compared with a gold-standard 12-lead electrocardiogram (ECG).

The device has a high sensitivity and specificity in the hands of experienced clinicians. In particular, the sensitivity was consistently high, which would ensure a high true-positive rate of identification. Furthermore, the negative predictive value in populations with a prevalence of AF as in the UK is sufficiently high to be useful.

In conclusion, the AliveCor® device should be considered as an option for early identification of patients with unknown AF. It has a high negative-predictive value and is sufficiently sensitive to be useful in a general practice population, but does not rule out the need for a definitive ECG in suspected cases.

Patients with a mechanical mitral valve are potential candidates for TAVI

We present a review of transcatheter aortic valve implantation (TAVI) in the presence of a mechanical mitral valve. We conclude that in patients with a prior mechanical prosthesis, TAVI is feasible and can be carried out without complication. Based on proof of feasibility, evidence to date would suggest that patients with mechanical prostheses be actively considered for TAVI going forward.

Cardiac orientation: is there a correlation between the anatomical and the electrical axis of the heart?

Data have suggested that in vivo cardiac orientation has the greatest effect on the cardiac electric field, and, thus, surface electrical activity. We sought to determine the correlation between in vivo cardiac orientation using cardiac computed tomography (CT) and the electrical cardiac axis in the frontal plane determined by surface electrocardiogram (ECG).

Patients aged between 30 and 60 years old with a normal body mass index (BMI), who underwent CT coronary angiography between July 2010 and December 2012 were included. Patients with diabetes, hypertension, arrhythmias, structural heart disease or thoracic deformities were excluded. In vivo cardiac orientation was determined along the long axis and correlated with the electrical cardiac axis on surface ECG.

Using the left trans-radial artery access route for coronary and bypass angiography has been frowned upon by the majority of operators due to several catheter changes during the procedure, patient discomfort because of spasm, positioning of the patients left arm and longer radiation exposure times, to name a few reasons. This short scientific article demonstrates one of a series of 22 cases where a single catheter was successfully used via this access route.

We continue our series in which Consultant Interventionist Dr Michael Norell takes a sideways look at life in the cath lab…and beyond. In...

Correspondence: coenzyme Q10 supplementation for the treatment and prevention of heart failure

Glasgow was the host of the recent 83rd Annual Congress of the European Atherosclerosis Society (EAS), held from 22nd–25th March 2015 and attended by...

News from the UK Stroke Forum

The UK’s premier stroke conference − the ninth UK Stroke Forum conference − took place on the 2nd−4th of December 2014 at the Harrogate...

Non-statin lipid lowering was the focus of several studies reporting at the recent American Heart Association (AHA) Scientific Sessions in Chicago, USA. It was...