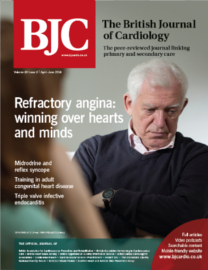 Management of refractory angina: the importance of winning over both hearts and minds

Refractory angina (RA) is an increasingly common, chronic, debilitating condition, which severely reduces quality of life. It can severely impact on physical, social and psychological wellbeing. RA should be considered in patients with known coronary artery disease, who continue to experience frequent angina-like symptoms, despite surgical or percutaneous revascularisation and optimal medical therapy. Objective evidence of reversible ischaemia should also be demonstrated. Treatment is challenging and often not delivered adequately. Management should ideally be provided by a specialist multi-disciplinary team, but national provision of such services is extremely limited. As a result, patients with RA commonly enter a downward spiral of long-term local review, cycling between the outpatient department and Accident and Emergency (A&E). Consequently, a disproportionately high proportion of healthcare resource is consumed in the management of these patients due to high attendance rates in primary and secondary care, unscheduled hospitalisation, prolonged hospital stays, investigations and polypharmacy. This may be improved by the implementation of more appropriate models of care delivery.

Deaths from congenital heart disease in childhood have fallen 83% in the last 25 years.1 This dramatic change has led to a significant increase in the numbers of adults with congenital heart disease (ACHD) requiring care, and prevalence is not expected to plateau until 2050.2 Even patients with extremely complex pathophysiology are now expected to survive well into adult life, and will have significantly higher rates of utilisation of all hospital services than the general population.3,4

The short- and long-term impact of psychotherapy in patients with chronic, refractory angina

Refractory angina (RA) describes those patients with persistence of symptoms despite optimal conventional strategies. It is often associated with a maladaptive psychological response, resulting in significant burden on hospital services. This observational study sought to assess the short- and long-term impact of psychotherapy on quality of life, mood and symptoms.

Between 2011 and 2012, consecutive attendees to a specialised RA service were recruited. Intervention consisted of a course of cognitive-behavioural therapy allied with an education programme. Outcome measures were collated pre-intervention, one month and two years post-intervention. Validated questionnaires were utilised for scoring assessments: SF-36 (Short-Form 36) for quality of life, HADS (Hospital Anxiety and Depression Scale) for anxiety/depression, and SAQ (Seattle Angina Questionnaire) for functional assessment.

There were 33 patients included. Median SF-36 scores increased and this effect remained in the long term. Levels of depression reduced, and improved further at subsequent review. Frequency of angina was comparable, both short and long term. Usage of glyceryl trinitrate (GTN) spray was similar at one-month follow-up and at two years.

In conclusion, a short course of psychotherapy appears to improve quality of life and mood in patients with RA, and is achieved independent of symptom control. Further research is warranted so that the debilitating morbidity associated with this disorder can be abrogated.

Clinical and psychological outcomes of an angina management programme

Chronic refractory angina results in significant NHS costs due to chronic high use of resources. This audit evaluated the clinical effectiveness of a cognitive-behavioural (CBT) programme in reducing angina symptoms after maximal medical and surgical intervention. The primary outcome was self-reported angina. Additional questionnaire data comprised perceived quality of life/disability, angina misconceptions, self-efficacy and mood. Data from the electronic patient administration system was used to compare use of cardiology hospital resources in the two years before and two years after attendance. Patients completing questionnaires reported significant improvements in all areas post-group and at two months. Resource use was lower in the two years post-programme than the two years prior. A CBT-based approach to symptom management could offer additional clinical benefits in the cardiac rehabilitation menu.

Midodrine is safe and effective in the treatment of reflex syncope

Reflex syncope is the most common cause of transient loss of consciousness. Practical manoeuvres may help, but additional measures are often required. In our experience, midodrine gives consistently good results in patients with reflex syncope. This study also provides reassurance that the effect on blood pressure is measureable, but small, and side effects are infrequent. UK prescribing may have been limited when midodrine was unlicensed, but midodrine is now licensed.

We treated 195 patients, age 40 ± 18 years, 72 (37%) aged under 30 years, 151 female (78%), who attended a Rapid Access Blackouts Triage Clinic and gave a clear history of reflex syncope. The median duration of symptoms was 28 months. A misdiagnosis of epilepsy had occurred in 39 patients and 42 had significantly low blood pressure.

In conclusion, in patients with reflex syncope, midodrine shows clinical benefit in greater than 70%, with 24% having complete symptom resolution. Side effects are rare, and there is little evidence of a hypertensive effect.

Despite the significant improvements in both diagnostic and therapeutic procedures in recent years, infective endocarditis (IE) remains a medical challenge due to poor prognosis and high mortality. Echocardiographically, the majority of the patients demonstrate vegetations on a single valve, while demonstration of involvement of two valves occurs much less frequently; triple-valve involvement is extremely rare. Reported operative mortality after triple-valve surgery is high and ranges between 20% and 25%.

Surgical treatment is used in approximately half of patients with IE because of severe complications. Reasons to consider early surgery in the active phase, i.e. while the patient is still receiving antibiotic treatment, are to avoid progressive heart failure and irreversible structural damage caused by severe infection, and to prevent systemic embolism. Prognosis in IE is influenced by four main factors: characteristics of the patient, the presence or absence of cardiac and non-cardiac complications, the infecting organism, and echocardiographic findings. Prognosis of right-sided native valve endocarditis is relatively good, with an in-hospital mortality rate of about 10%.

We present a case of a young man with triple-valve endocarditis followed by a brief review of the literature.

This was a pilot study, in which 55 breast cancer patients were enrolled, to evaluate the alterations of strain and strain-rate parameters in breast cancer patients receiving doxorubicin and compare them with serial conventional echocardiography changes. A week prior to, and a week after, chemotherapy with doxorubicin, left ventricular ejection fraction (LVEF) and strain and strain-rate parameters were measured by conventional 2D echocardiography and tissue Doppler-based imaging, respectively.

In conclusion, strain/strain-rate significant reduction, in the setting of normal range LVEF, suggests subclinical heart failure. Whether the strain and strain-rate imaging should replace the conventional echocardiography for early monitoring of cardiotoxicity of doxorubicin requires further investigations.

When you can’t obtain a history…

A 79-year-old lady was taken to the emergency department by her carer, who had noticed an acute deterioration of her general condition. Unfortunately, it was difficult to obtain an accurate history from the patient due to cognitive impairment, and her carer was not aware of her past medical history. However, she had been observed clenching her hands to her chest. She was not previously known to the admitting hospital.

Updated European Society of Cardiology (ESC) Guidelines for the diagnosis and treatment of acute and chronic heart failure have been...

The National Institute for Health and Care Excellence (NICE) has issued Technical Appraisal Guidance for sacubitril/valsartan (Entresto™, Novartis Pharmaceuticals). The drug has been...

Book review: Upon a trailing edge