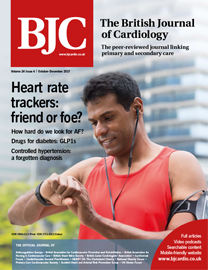 We believe that controlled systemic hypertension should be considered as an important clinical entity (figure 1). We know that cardiovascular risks increase with rising blood pressure, each 2 mmHg increase in systolic blood pressure is associated with a 7% and 10% rise in mortality from ischaemic heart disease and stroke, respectively.1 However, the converse proposition would also seem to be true. Meta-analyses have found significant reductions in stroke and coronary events associated with blood pressure control,2 even in grade 1 hypertension. Furthermore, large studies such as SPRINT (Systolic Blood Pressure Intervention Trial)3 have shown that patients with tighter blood pressure control (mean systolic 121.4 mmHg) have significantly lower rates of major cardiovascular events and heart failure in addition to reduced mortality compared with the standard therapy cohort (mean systolic 136.2 mmHg). With reduction of blood pressure the associated risks are reduced.

Glucagon-like peptide-1 (GLP-1) receptor agonists are an injectable glucose-lowering therapy used in the treatment of type 2 diabetes mellitus (T2DM). Alongside dipeptidyl peptidase-4 (DPP-4) inhibitors, they exert their effect by augmenting the incretin pathway. GLP-1 receptor agonists offer reductions in glycosylated haemoglobin (HbA1c) and weight alongside a low risk of hypoglycaemia. The cardiovascular safety of GLP-1 receptor agonists in patients at elevated cardiovascular risk has been examined in large double-blind, placebo-controlled cardiovascular safety trials. Liraglutide demonstrated superiority over placebo with reduced major adverse cardiovascular events (MACE) in the treatment group. Exenatide, lixisenatide and semaglutide have shown non-inferiority versus placebo for MACE. These trials demonstrated no association between GLP-1 agonist therapy and hospitalisation for heart failure.

To examine the current practice of British Society of Cardiovascular Imaging (BSCI) members in the administration of beta blockers in computed tomography (CT) coronary angiography (CTCA) a 10-point online questionnaire was emailed to all registered members of the British Society of Cardiovascular Imaging. There were 61 respondents: 75% give intravenous (IV) metoprolol in the CT department, the rest a combination of oral and/or IV dosing. Over 50% were happy to administer 50 mg or more. No serious complications related to drug administration had been seen by 82%. Of the remaining 18%, half (six reports) documented severe hypotension and two reported a death. No physical observations were taken by 25%, at any point. Another 27% checked blood pressure before the scan only, 17% measured blood pressure before the scan and immediately after and 28% measured before the scan and after with a delay.

In conclusion, among BSCI members, there is no uniform strategy regarding the route or dose of beta blocker administration, or if, when and what physical observations should be performed. Several severe adverse events have been documented, including two deaths. This, however, is in the context of the large volume of CTCAs performed nationally, and so, despite some doses of beta blocker exceeding British National Formulary recommendations, this appears safe.

Wearable and smartphone-based activity and heart rate (HR) monitors are becoming increasingly common, with around 80 million devices in use in 2017. Wearable and smartphone-based devices may be dedicated HR monitors or part of an activity tracker system. One of the main aims of these devices is to encourage exercise and increase fitness, which is clearly desirable in a society with high levels of inactivity and obesity. These devices provide individuals with large amounts of data including HR information. This may, therefore, give an opportunity to document or diagnose arrhythmias. Undiagnosed atrial fibrillation is a common problem and is associated with a huge burden of potentially preventable stroke. Wearable HR monitors may provide the opportunity to identify these individuals and allow them to receive stroke prevention treatment. However, the consumer fitness market is unregulated and the manufacturers emphasise that their devices are not intended to be used for detecting heart rhythm problems. The reliability, sampling frequency and algorithms for the HR data these devices provide are hugely variable. Detected ‘abnormalities’ may inform clinical decision making but it may also trigger unnecessary anxiety and costly investigations in healthy people.

How hard do we look for atrial fibrillation?

Atrial fibrillation (AF) is one of the most common arrhythmias, affecting approximately 2% of the general population. Identifying AF after an ischaemic stroke is particularly important as it changes the recommended antithrombotic therapy from antiplatelets to anticoagulation. Currently, there is no clear consensus with regards to the duration of rhythm monitoring post-stroke. In our study, we aim to review some of the pivotal studies regarding rhythm monitoring after an ischaemic stroke and identify the percentage of patients who get referred for prolonged rhythm monitoring after a stroke by providing real-world data from the Ipswich hospital. To our surprise, we did not identify any patients who got referred for prolonged rhythm monitoring (ILR) and the proportion of patients who did not have a 24-hour tape was unexpectedly high. In addition, there was a clear tendency for patients with lacunar strokes not to get investigated with 24-hour tape.

A total of 193 consecutive patients, with a clinical diagnosis of CHD who had a PPCI, were identified retrospectively between 2008 and 2013, and were subsequently telephone surveyed. Data were analysed using chi-square tests and Fisher’s exact tests. At survey, 21.8% of patients smoked cigarettes, 30.6% were adhering to physical activities as per guidelines, 36.3% were consuming five portions of fruits and vegetables per day, and 9.8% were consuming three portions of oily fish per week. Negative stress, low mood, advanced age, poor health, lack of enjoyment from physical activities, low expectations from physical activity benefits, obesity and diabetes, were associated with non-adherence to physical activities as per guidelines.

In conclusion, risk factor targets for secondary prevention were not reached by a large proportion of patients. Several barriers exist among these individuals. Thus, there is still considerable potential for cardiac rehabilitation clinicians to improve standards of preventive cardiology by clearly identifying barriers and ways to overcome them.

Invasive coronary angiography (ICA) is an important diagnostic test in the diagnosis of coronary artery disease (CAD). However, it is associated with a small risk and is a relatively expensive procedure. National Institute for Health and Care Excellence (NICE) 2010 guidelines on stable chest pain recommended that patients with stable chest pain and high probability of CAD should be investigated with ICA.

The National Institute of Health and Care Excellence (NICE) has updated its clinical guideline (CG71) on the identification and management of familial hypercholesterolaemia...

Kathryn E Griffith (Secretary of the PCCS and Cardiovascular Lead for the Vale of York CCG) writes about the newly formed Primary Care Cardiovascular...

New series on insights from the Bradford Healthy Hearts project

We are delighted to announce a new series for 2018 on the award-winning Bradford Healthy Hearts Project. This collaborative improvement programme, which involves primary care,...

The 31st HEART UK Annual Medical and Scientific Conference took place at the University of Warwick from 5th – 7th July 2017. This year’s...

A new advisory careers test has been designed with the aim of transforming the recruitment of potential doctors. It is hoped the test will...

Around 7,400 individuals will have a stroke in Wales each year, with 66,000 currently living with the after effects of a stroke. It is...

The European Commission (EC) has approved an update to the label of rivaroxaban (Xarelto®, Bayer) to include a 10 mg once daily dose for...

The ESC decision is a huge vote of confidence in London as a leading centre for medical research. London overcame stiff competition from other...

We are delighted that the BJC is now an offcial partner with Anticoagulation...