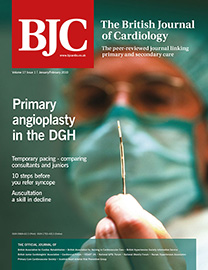 Cardiac auscultation is a critical part of the clinical examination. In antiquity physicians listened to heart sounds directly by placing their ear to the chest. In 1816 Laennec was asked to examine a young ‘corpulent’ woman in Paris, out of embarrassment he rolled a sheaf of paper into a cylinder to listen to her heart sounds, the stethoscope was invented. Initially, Laennec applied his invention to study cardiopulmonary diseases where he correlated bedside findings with autopsy results.(1

Transvenous pacing – a dying art for a dying heart?

The atrioventricular (AV) conducting system of the mammalian heart was described a hundred years ago. Albert Hyman, a cardiologist working in New York City performed studies on the stopped heart. On injection of drugs into the right atrium, usually including adrenaline, the stopped heart continued beating.

Sandwell General Hospital is an acute district general hospital that provides primary angioplasty service without on-site cardiac surgical facilities. The service was rolled out in stages in July 2005 and achieved 24-hour status by January 2007. Its two distinguishing features are collaboration with its partner hospital of the same National Health Service (NHS) trust for after-hours angioplasties, and mobilisation of interventional cardiologists to whichever one of the two hospitals that patients present to. We aimed to show that 24-hour primary angioplasty service by this collaboration is feasible and can achieve recommended door-to-balloon times. A retrospective audit of the British Cardiovascular Intervention Society database of 381 primary angioplasties over a four-year period from June 2005 to June 2009 was performed. Median door-to-balloon time improved from 80 minutes (interquartile range [IQR] 51 to 107) to 64 minutes (IQR 50 to 85; p<0.007) and the percentage of primary angioplasties achieving recommended door-to-balloon time of ≤90 minutes increased from 65% (45/69) to 79% (169/214; p=0.001). In-hospital deaths were 3.0% (10/332) for patients without cardiogenic shock and 6.8% (26/381) for all-comers. We conclude that 24-hour primary angioplasty service in a collaboration of district general hospitals with a physician-to-patient no-transfer approach can achieve favourable door-to-balloon times.

10 steps before you refer for syncope

Syncope, a transient loss of consciousness, can present to the clinician in a variety of ways. The most important tool for the clinician is the history, not only from the patient but also from a witness of the collapse, if available. Clinicians should be aware of the possibility that a patient or carer may unwittingly lead him or her in the wrong direction in attempting to describe falls or fits. Misdiagnosis of epilepsy in the syncopal patient is well recognised. Data brought before Parliament have indicated at least 74,000 cases of misdiagnosis of epilepsy in England alone, at a cost of £184 million to the National Health Service (NHS), and incalculable cost to patients. The All-Party Report from 2007 only refers to patients misdiagnosed and mistreated with anticonvulsants, there are many more patients in whom epilepsy is ‘equivocal’, but who often have to bear the stigma of diagnosis. In discussions about syncope, definitions are important. Syncope is a sudden, brief loss of consciousness due to a reduction in blood flow to the brain and, thus, of its oxygenation. With loss of consciousness there is collapse that may or may not be associated with jerking of the limbs. This can lead to confusion in the separation of epilepsy from syncope and we know that approximately 10% of patients diagnosed as having epilepsy probably suffer from syncope. Syncope is a frightening symptom, which renders the sufferer, and those who are close, concerned about the diagnosis. In particular they will be worried about continuing the activities of normal life without social isolation due to the embarrassment and stigma of collapsing in public. Throughout the clinical pathway keeping the patient central to the process and supported remains vital. Support for both the patient and the professional can be sought at www.stars.org.uk

Experience of temporary transvenous pacing in a District General Hospital

Temporary transvenous pacing (TTVP) is a procedure that carries significant risk to the patient. We performed a retrospective analysis of TTVP in an outer London hospital between July 2003 and March 2009 to establish who performed the procedure and the outcomes.

Temporary pacing lead insertion in NHS Lanarkshire hospitals between 2005 and 2007: a retrospective study

As the number of temporary pacing lead insertions performed declines, the experiential competency of physicians can also be expected to fall. We performed a retrospective study looking at the route of insertion, indications and complications comparing consultants and junior doctors.

Postural orthostatic tachycardia syndrome (POTS) is a condition that results from orthostatic intolerance. Patients, frequently young females, present with tachycardia, headache, palpitation, sweating, nausea and near syncope, on changing their posture from lying to standing. It is frequently misdiagnosed as panic attacks or anxiety neurosis. Tilt-table testing is diagnostic. Treatment depends on the type, whether primary or secondary, and there are non-pharmacological and pharmacological options.

Is there a role for 64-multi-detector CT coronary angiography in octogenarians? A single-centre experience

There are currently limited data regarding multi-detector computed tomography (MDCT) coronary angiography in very elderly patients. This study reviews the utility of MDCT coronary angiography in octogenarians examined at our institution. We reviewed 26 patients (mean age 83.1 ±4.6 years, range 80–96; 13 male) who attended for MDCT coronary angiography at our institution between January 2005 and January 2008. Scan indications, findings and clinical outcomes were recorded. Studies were graded according to overall image quality.  One patient was excluded because of contrast extravasation. Of the 25 complete studies, image quality was at least adequate in 72% of patients. A total of 35 significant (>50% diameter narrowing) stenoses were detected. The mean Agatston score was 1182.7 ±1080.2 in the 14/25 patients evaluated. In 6/25 patients (24%) MDCT excluded significant stenoses; in 12/25 patients (48%) one or more potentially significant stenoses were identified, a diagnosis confirmed in the four patients who underwent further investigations; in 7/25 patients (28%) the MDCT scans were of insufficient diagnostic quality. In conclusion, MDCT coronary angiography is feasible in the majority of very elderly patients. Diagnostic scans were obtained in most octogenarian patients, allowing detection of potentially flow-limiting stenoses or exclusion of significant disease.

The authors describe a case of hyperkalaemia in a patient receiving trimethoprim.

Highlights from the recent American Heart Association meeting held in Orlando, Florida, USA, from 14th–18th November 2009, included good news for niacin but not...

Cardiac rehabilitation: we should all be doing it

Correspondence to Cardiac Cardiac rehabilitation: we should all be doing...

Book review – Making sense of the ECG: cases for self-assessment

A wealth of ECG textbooks exist but this pocketbook tackles ECGs with a remarkably practical approach while still providing essential knowledge. The entire book...