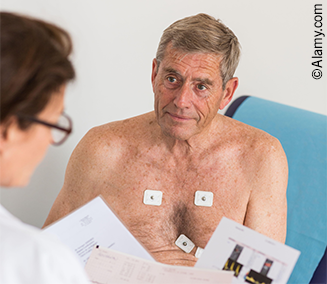 Long-term oral anticoagulation is the mainstay of stroke prevention in at-risk subjects.3 Vitamin K antagonists (VKA), principally warfarin, have been the most commonly used method of oral anticoagulation, but the more recent availability of non-VKA oral anticoagulants (NOACs) has broadened treatment options for these patients.4 Edoxaban is a Factor Xa antagonist with a therapeutic indication for the prevention of stroke in adults with non-valvular AF and at least one other risk factor.5 This review summarises the clinical evidence-base for edoxaban from the randomised, controlled Effective Anticoagulation with Factor Xa Next Generation in Atrial Fibrillation–Thrombolysis in Myocardial Infarction 48 trial (ENGAGE AF-TIMI-48; NCT00781391).6

Design of the ENGAGE-AF TIMI-48 trial

The design of this trial7 is summarised by Khan and Thomas in the first article in this supplement. Briefly, a population of 21,105 patients with non-valvular AF were randomised in a double-blind, double-dummy manner to once-daily low-dose edoxaban (30 mg reduced to 15 mg in appropriate patients), once-daily high-dose edoxaban (60 mg reduced to 30 mg in appropriate patients), or to warfarin (target international normalised ratio [INR] 2.0–3.0) for a median of 2.8 years. The dose reductions were applied for patients with renal dysfunction (creatinine clearance 30–50 ml/min), weight ≤60 kg, or prescription of verapamil, dronedarone or quinidine (these drugs are strong P-glycoprotein inhibitors that might increase systemic exposure to edoxaban by inhibiting its metabolism8). Patients were also required to have a CHADS2 score of at least two, signifying elevated risk of stroke at baseline.9 The low-dose edoxaban regimen was not subsequently submitted for regulatory approval, and further discussion in this article will be about the approved high-dose regimen.

The primary efficacy outcome was time to stroke or systemic embolic event (SSE). A modified intention-to-treat (mITT) analysis was used first to evaluate non-inferiority of edoxaban versus warfarin; if this was significant, the ITT population was used to test for superiority (this included outcomes during a 30-day period for transition to open-label anticoagulant therapy after the end of randomised treatment). A composite of stroke, SSE or cardiovascular (CV) death was a prespecified secondary efficacy end point, and major bleeding was a prespecified primary safety end point.

Clinical outcomes related to stroke from the main trial analysis

A summary of main outcomes from ENGAGE-AF TIMI-48, with emphasis on outcomes related to stroke, is shown in Figure 2.6 Edoxaban was non-inferior to warfarin in terms of the primary end point, although a trend towards superiority did not reach significance (p=0.08). The risk of stroke/SSE/CV death, stroke/SSE/all-cause death, and death/intracranial haemorrhage were reduced significantly with edoxaban compared with warfarin.

Edoxaban was associated with reduced risk of haemorrhagic stroke versus warfarin (p<0.001). Hazard ratios (HRs) for ischaemic stroke, disabling/fatal stroke and fatal stroke did not differ significantly between warfarin and edoxaban. The reduced risk of haemorrhagic stroke, and the composite end point including intracranial haemorrhage described above, were consistent with significant reductions in major bleeding events for edoxaban versus warfarin, including any major bleed, fatal bleeds, any intracranial bleed and fatal intracranial bleeds.6

There was no significant heterogeneity in outcomes for stroke, or subtypes of stroke, in patients with or without prior stroke/TIA (figure 3). The risk of haemorrhagic stroke was reduced irrespective of stroke/TIA history, as in the main analysis, with no influence of prior stroke/TIA on the HRs for edoxaban versus warfarin. However, the absolute benefit of edoxoban was larger in the prior stroke/TIA group, consistent with the higher baseline risk of adverse stroke outcomes in this group. The reduction in haemorrhagic stroke with edoxaban versus warfarin was consistent with the maintained advantage for edoxaban in terms of reduced risk of bleeding events (figure 4).

The risk of net clinical benefit outcomes (death/stroke/systemic embolic event/major bleed, death or disabling stroke, death or disabling stroke or life-threatening bleed, and death or stroke or intracranial haemorrhage) were also reduced significantly in favour of edoxaban in the prior stroke/TIA group, but not in the lower-risk group without prior cerebrovascular diseases. Again, there were no significant interactions between stroke/TIA history and outcomes.

Another subgroup analysis focused on mortality outcomes across treatment groups.11 There was a trend towards fewer deaths on edoxaban versus warfarin (773 vs. 839 deaths, p=0.08). Fewer fatal bleeds on edoxaban versus warfarin contributed importantly to the lower number of deaths with edoxaban (35 vs. 56, p=0.013). There were no significant differences between arms in the numbers of deaths for CV deaths unrelated to bleeding.

The ENGAGE-AF TIMI-48 population was stratified into subgroups by age for this subgroup analysis: 26% were aged <65 years, 34% were aged between 65 and 74 years, and 40% were aged 75 years or over.12 There were some important differences at baseline between these groups, particularly a lower proportion of some significant concomitant diseases with increasing age, e.g. diabetes (41%, 43% and 28%, respectively) and heart failure (70%, 63% and 45%, respectively). It is possible that the elderly group represented a healthy, motivated and compliant population: time in therapeutic range for warfarin was modestly higher in the elderly group (69.6%) relative to the younger groups (67.8% and 68.4%). The risk of stroke increased with age: the proportions with CHADS2 score ≥4 were 15%, 17%, and 32% and with CHA2DS2-VASc score ≥4 were 33%, 79%, and 88%, for the increasing age groups, respectively. HAS-BLED score increased more steeply with age (16%, 58%, and 56% had score ≥3), signifying an especially marked effect of age on bleeding risk.

There were no significant interactions between age and treatment outcomes. Hazard ratios for the primary end point (stroke or SSE) were between 0.83 and 0.94 across the three age categories, all 95% CI crossed unity, and pint was 0.84. Findings were similar for ischaemic stroke (HRs 0.90–1.16, pint=0.48), and fatal stroke (HRs 0.86–1.02, pint=0.89). Nominally significant reductions in favour of edoxaban (point estimates for HR and their 95% CI were all <1) occurred for the 65–74 year and ≥75 year groups for haemorrhagic stroke, intracranial haemorrhage, and major bleeding; however, 95% CI for the <65 year age group for these outcomes crossed unity, and pint did not approach significance for any outcome. These data were consistent with the higher risk of bleeding in older patients, and suggest that the benefit in the main analysis may have been driven, importantly, by treatment effects in older patients.

Nine hundred (4.3%) of the ENGAGE-AF TIMI-48 population were considered to be at risk of falls, based on prior history of falls, lower extremity weakness, poor balance, cognitive impairment, orthostatic hypotension, receipt of psychotropic drugs, severe arthritis, or dizziness.13 Unsurprisingly, more of this frail population were elderly (66% were aged ≥75 years vs. 39% for younger patients); they were more likely to suffer bone fractures, major bleeding events or death, but were not at increased risk of ischaemic events. There was no significant interaction between frailty status and treatment effects.

Haemorrhagic stroke was reduced similarly in both VKA history groups (HRs 0.56 and 0.53, respectively, pint=0.87). A significantly larger treatment effect occurred in VKA naïve patients for the primary outcome, stroke and ischaemic stroke, but no effect of VKA history on the reduction in haemorrhagic stroke. There was no influence of treatment history on MI, CV death and all-cause death for edoxaban versus warfarin. Edoxaban reduced major bleeding outcomes, e.g. HRs (95% CI) for major bleeding versus warfarin (VKA naïve/VKA experienced) were 0.80 (0.65 to 0.97)/0.81 (0.69 to 0.95), pint=0.90. Similar results were seen for other bleeding outcomes.

One-quarter of patients (25%) received a single antiplatelet inhibitor at baseline.15 Receipt versus non-receipt of these drugs did not influence the primary outcome significantly (HR 1.12, 95% CI 0.95 to 1.32), but increased the risk of major bleeding (HR 1.46, 95% CI 1.27 to 1.67). Receipt of a single antiplatelet inhibitor did not alter the relative efficacy of edoxaban and warfarin.

Anticoagulant therapy may be suspended for surgical interventions, and 43% of the ENGAGE-AF TIMI-48 population suspended study treatment for more than three days without open-label anticoagulant cover.16 Patients who interrupted anticoagulant were more likely to report subsequent stroke/SSE (15.42 vs. 0.26/100 patient-years) and major adverse CV events (60.82 vs. 0.36/100 patient-years, p<0 .001 for both). Another analysis evaluated the effects of stopping or continuing anticoagulant therapy on outcomes occurring between seven days before and 30 days after the surgery.17 Rates of SSE, major bleeds, or major bleeds plus clinically relevant non-major bleeding did not differ between treatment groups for patients who had discontinued or continued their anticoagulant regimen.

Anticoagulant therapy with a VKA represented the standard of care for anticoagulant therapy for people with AF for many years, but management guidelines in this area now recommend use of a NOAC (including edoxaban) or VKA for patients with AF and risk factor(s) for stroke.20,21 The analyses from ENGAGE-AF TIMI-48 described above confirm the utility of edoxaban for stroke prevention, with equivalent efficacy with warfarin for preventing CV and embolic events, with a reduced risk of bleeding, including into the brain. The significantly reduced risk of major bleeding on edoxaban versus warfarin contributed to numerically reduced mortality on this treatment.

Importantly, the therapeutic profile of edoxaban is maintained in patients with a history of cerebrovascular disease and in elderly patients (including frail individuals). Advanced age and prior stroke/TIA are themselves potent risk factors for stroke, as reflected by their higher weighting compared with other risk factors in the CHA2DS2-VASc risk engine for stroke prediction.9

Edoxaban was as effective as warfarin for the prevention of stroke and systemic embolism, in patients with non-valvular AF, with or without prior cerebrovascular disease. In addition, edoxaban significantly reduced the risk of bleeding versus warfarin.

Introduction
1. Insights in patients with atrial fibrillation and co-existing cardiovascular disease
3. Insights in the treatment and prophylaxis of venous thromboembolism
4. Insights from primary care: opportunities and challenges

Medical knowledge is constantly changing. As new information becomes available, changes in treatment, procedures, equipment and the use of drugs become necessary. The editors/authors/contributors and the publishers Medinews (Cardiology) Ltd have taken care to ensure that the information given in this text is accurate and up to date at the time of publication.

Readers are strongly advised to confirm that the information, especially with regard to drug usage, complies with the latest legislation and standards of practice. Medinews (Cardiology) Limited advises healthcare professionals to consult up-to-date Prescribing Information and the full Summary of Product Characteristics available from the manufacturers before prescribing any product. Medinews (Cardiology) Limited cannot accept responsibility for any errors in prescribing which may occur.

The opinions, data and statements that appear are those of the contributors. The publishers, editors, and members of the editorial board do not necessarily share the views expressed herein. Although every effort is made to ensure accuracy and avoid mistakes, no liability on the part of the publisher, editors, the editorial board or their agents or employees is accepted for the consequences of any inaccurate or misleading information.

© Medinews (Cardiology) Ltd 2020. All rights reserved. No part of this publication may be reproduced, stored in a retrieval system, or transmitted in any form or by any means, electronic, mechanical, photocopying, recording or otherwise, without the prior written permission of the publishers, Medinews (Cardiology) Ltd. It shall not, by way of trade or otherwise, be lent, re-sold, hired or otherwise circulated without the publisher’s prior consent.