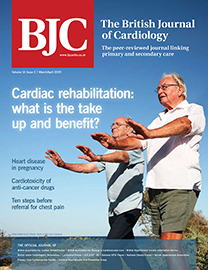 Improving the uptake of cardiac rehabilitation – redesign the service or rewrite the invitation?

For patients with established coronary artery disease, lifestyle changes such as dietary modification, smoking cessation, stress management and regular exercise, can help to reduce, or perhaps stop, the progression of their cardiovascular disease, reduce their chance of having another cardiac event, and improve their quality of life. Cardiac rehabilitation can accelerate physical and psychological recovery and reduce mortality after acute cardiac events by 10–25% according to systematic reviews of randomised trials.1-3 Cardiac rehabilitation programmes can also reduce risk factors, improve health-related quality of life, and increase the likelihood of return to work.3-6 Despite this evidence, however, typically fewer than 35% of eligible patients take part in cardiac rehabilitation worldwide, with a recent UK audit reporting figures in line with this.(7-10)

Cardiotoxicity from cytotoxics in the 21st century

In this issue, Pfeffer et al. discuss the impact of anthracycline-related cardiotoxicity and strategies for its treatment and prevention (see pages 85–9). Anthracyclines are not the only widely used class of cytotoxics with the potential to cause cardiotoxicity, but they are the most studied and the effects are well described. The antimetabolites 5-fluorouracil (5FU) and capecitabine, an oral pro-drug of 5FU, can cause an acute and chronic cardiotoxicity1,2 while vinorelbine, a vinca alkaloid, can cause angina.3 Paclitaxel, a taxane, has been shown to augment the cardiac side effects of doxorubicin, an anthracycline.4,5 The potential for cardiotoxicity is therefore, a major consideration when determining appropriate treatment for patients.

10 steps before you refer for chest pain

Chest pain is a common presentation in general practice. Each year about 1% of the UK population visit their GP with chest pain.1 The average GP will see, on average, four new cases of angina each year.2 The Euro heart survey of newly diagnosed stable angina patients showed that the incidence of death and myocardial infarction (MI) was 2.3/100 patient-years. This is increased in patients with a previous MI, short history, more severe symptoms and with heart failure or other co-morbidities, such as diabetes.3 The recognition of these patients as at high risk for cardiovascular events has led to the improvement of diagnosis and management of angina. Rapid access chest pain clinics have been developed to allow quick assessment of patients with new onset angina as part of a National Service Framework for coronary artery disease.

Anthracyclines are commonly used antineoplastic drugs. However, their clinical utility is tempered by a dose-dependent risk of cardiotoxicity and congestive heart failure. Current preventive measures focus on dose reduction, use of less cardiotoxic anthracycline analogues and prophylactic use of dexrazoxane. Recent research has focused on early monitoring and risk stratification to identify patients that are ‘at risk’ for cardiotoxicity, using biochemical markers and the prophylactic use of novel cardioprotectants. This article reviews the clinical course, pathogenesis, cardiac monitoring and new concepts in diagnosing and preventing anthracycline cardiotoxicity.

Heart disease is the leading cause of death in pregnancy. Although women with high-risk cardiac conditions can be identified, the majority of deaths occur without such pre-existing severe cardiac disease. Coronary artery disease is an increasing cause. Previous reports on heart disease in pregnancy have focused on tertiary-centre and non-UK populations. We report a UK District General Hospital (DGH) experience. We recorded all pregnant women referred to a dedicated DGH cardiology service in Bromley between August 2004 and August 2007. One hundred and three women were referred, including 37 with murmurs or known valve disease, 31 palpitations or arrhythmias, 13 congenital heart disease and eight hypertension. Of the women presenting with a murmur, only one, a recent immigrant, had a significant cardiac condition requiring treatment. Three women with arrhythmias required admission but none were life-threatening. Four women required admission for heart failure, two with peri-partum cardiomyopathy and two with previous hypertension. Only two women were referred with chest pain, neither had ischaemia. Tertiary referral was required in cases of heart failure, an increased risk of aortic rupture or severe mitral stenosis, but all other women were managed safely in a DGH. Seventy per cent of women only needed one clinic visit. In conclusion, the majority of pregnant women referred to a DGH cardiology service are in the previously defined low-risk group. Cardiac symptoms or signs in UK-born pregnant women without known heart disease are unlikely to represent high-risk cardiac disease but recent immigrants may have significant undiagnosed disease. Chronic hypertension is a risk factor even if controlled at the start of pregnancy. Ischaemia is an increasing problem.

Are angiotensin-blocking drugs being used in adequate doses?

Angiotensin-receptor blocking drugs have been shown to be an effective therapeutic strategy in a number of cardiovascular diseases. Many randomised controlled trials have demonstrated optimal doses of these drugs. We therefore investigated the doses of angiotensin-converting enzyme inhibitors or angiotensin-receptor blockers in patients admitted to hospital. We found from a total of 60 consecutive patients, only 38% (n=23) were on the top recommended dose and the average daily dose was 63.1±4.5% of the recommended dose. This study confirms that a significant number of patients are receiving suboptimal doses of angiotensin-blocking drugs and this under-dosing is likely to result in a failure to achieve the maximal therapeutic benefit.

The new antiplatelet agent, prasugrel (Lilly/Daiichi Sankyo), has been approved in the European Union for the prevention of atherothrombotic events in patients with acute...

New evidence has been reported suggesting that use of proton pump inhibitors (PPIs) such as omeprazole can reduce the effectiveness of clopidogrel. In a recent...

Is this a conference you want to attend?