This book largely reflects writers from Italian and German practise on sudden death. It begins with a definition and introduction to sudden death and its causes, which are mainly ischaemic heart disease, cardiomyopathy and the newly-observed channelopathies predominating in the younger age group. The size of this problem is discussed, showing that cardiovascular death is the main killer in developed countries with sudden death as a common mode of death which has been increasing in recent years. This is explained very well. 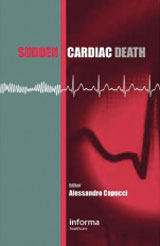 The risk of sudden death after myocardial infarction is described particularly with regard to the era of early reperfusion/stent insertion. Pathophysiology is very well dealt with looking in detail at the substrate for arrhythmias, different types of arrhythmias and treatment of these, including ablation, drug therapy and implantable defibrillators. An interesting point made is that patients with implantable cardioverter defibrillators (ICDs) still die because the public erroneously think that ICDs will avoid the risk of sudden death and make you live forever! The mode of death in ICD patients is sudden in up to one third of cases, with the most common mechanism being ventricular fibrillation treated with an appropriate shock but then followed by electromechanical dissociation. Electrical dissociation probably arises from other fatal events, such as large extent ischaemia, but it may also be a result of too frequent shocks too closely spaced resulting in severe haemodynamic deterioration.

Primary prevention of sudden death is highlighted with controversy over its widespread application, particularly in ischaemic heart disease patients with poor left ventricular function, which is the main risk factor for sudden death in this group of patients. The use of the beta blocker, amiodarone, and implantable ICDs are discussed with the main trials reported. The role of ICDs in dilated cardiomyopathy and hypertrophic cardiomyopathy is also discussed. Again, the application is in patients with poor ventricular function in dilated cardiomyopathy, while in hypertrophic cases it is those with a family history and a previous event, and those with extreme thickening of the ventricle. In the newly described condition of arrhythmogenic right ventricular cardiomyopathy, the use of ICDs has been demonstrated, whereas trials on drugs are not available. In the channelopathies, prevention depends on the use of beta blockers and ICD therapy.

Pharmacological management is also covered, including use of beta blockers, aldosterone antagonists, ACE inhibitors, angiotensin receptor blockers, statins, omega-3 fatty acids and magnesium. The issue of sudden death in heart failure is great due to the application of  ICDs and their cost in the general population. The future of public access to defibrillators is covered, a controversial issue given the cost of putting defibrillators in every public building in the country and training the public in the use of defibrillators in schools and sport. There are guidelines for first aid in cardiac arrest and survival after cardiac arrest. Sudden death in children and adolescents, with emphasis on cardiomyopathies and channelopathies, is highlighted. Finally, the new inherited arrhythmias and future genetic therapy is discussed by international authors, who are well established in this area.

Overall, this is an excellent book of great use to cardiologists, particularly those who have an interest in sudden death, inherited cardiac disease and ischaemic heart disease. I have one major quibble: pathological input into this book is non-existent and good quality cardiac pathology in the analysis of the causes of sudden cardiac death is essential in any studies of this condition.