Ventricular fibrillation (VF) is induced at the time of implantable cardioverter defibrillator (ICD) implantation in the UK, typically at least twice, with defibrillation ≥10 J below the maximum output. With the advent of modern leads/devices a single test may be sufficient. 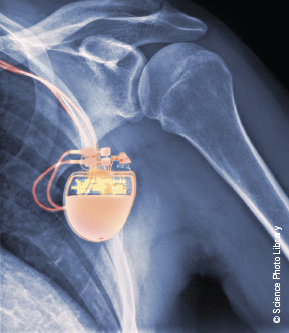 In conclusion, with modern leads and devices, a single successful DSM test is sufficient. This may be particularly important in patients in whom multiple VF inductions would be undesirable, such as those with severe left ventricular systolic impairment.

Implantable cardioverter defibrillators (ICDs) are designed to treat ventricular arrhythmias and their efficacy is commonly tested at implantation. The defibrillation threshold (DFT) is the minimum electrical dosage that successfully terminates ventricular fibrillation (VF). The DFT test has been defined as the minimal energy at which at least two defibrillation shocks successfully terminate induced VF.1 A DFT test involves multiple VF inductions to ensure the device can sense, detect and convert VF. Defibrillation is a probabilistic phenomenon in which the higher the shock strength, the higher the likelihood of successful defibrillation. The most common approach in clinical practice to approximating the DFT is to induce VF at least twice and defibrillate the patient with an energy at least 10 J less than the maximum output of the ICD.2 This method ensures an adequate safety margin in most patients, although it does not determine the actual DFT.3 With the advent of modern leads and devices, this strategy of double defibrillation safety margin (DSM) testing (at least 10 J below the maximum output of the device each time) may be unnecessary, particularly in patients with severe left ventricular (LV) systolic impairment.

We retrospectively evaluated our ICD database at Glenfield Hospital, University Hospitals of Leicester, UK from September 2006 to October 2007. Information collected included baseline patient characteristics, ICD indication, lead/generator data, procedure time and data on DFT assessment. All our patients underwent DFT assessment at implant using the following protocol: VF induced in all using 30–50 Hz burst pacing, shock on T-wave or DC fibber induction; the device was programmed to deliver an initial shock ≥10 J below the maximum output of the device, and if this failed, a second shock at maximum output. An external biphasic 360 J shock was given if both ICD shocks failed. A second VF induction was performed in all patients with the same protocol as above; there was a five minute waiting period between tests. A successful DSM test was defined as VF cardioversion at ≥10 J below the maximum output of the device. If a patient failed the first DSM test, additional manoeuvres were performed to achieve successful defibrillation with ≥10 J safety margin for two consecutive tests. These manoeuvres included ICD lead repositioning, addition or removal of superior vena cava coil, shock polarity reversal, or fixed pulse width programming. For patients who failed the second DSM test (but passed the first), a third DSM test was performed without performing additional manoeuvres to the device or lead. Data on mortality of the cohort at follow-up were also collected.

All patients had good sensing of induced VF, and where a shock was successful there was prompt termination of VF. There were no differences in the success rate between those with single- and double-shocking coils. Excluding those patients who had a pulse generator change only from analysis did not affect the findings. There were no adverse clinical events during defibrillation testing in our cohort.

There were 31 deaths in our cohort at a mean follow-up of 2.9 ± 0.02 years following device implantation. There were no significant differences in success of initial defibrillation testing between those that died at follow-up compared with those who did not die.

The goal of defibrillation testing is to ensure the maximal energy output of the device has an extremely high (>99%) probability of terminating VF in a given patient. Most UK centres perform DSM testing at implant, typically with a protocol of two defibrillations at a minimum of 10 J below the maximum output of the device. However, our study suggests this strategy of testing twice may be unnecessary in most patients. Our cohort consisted of patients with both primary and secondary indications and utilised a variety of generator and lead manufacturers. We demonstrated that almost all patients had a successful first DSM test (with 10 J ‘safety margin’) and the vast majority passed the second DSM test (10 J safety margin again) as well. The minority that failed the second DSM test (but successfully defibrillated at maximum output) all passed a third DSM test (with 10 J safety margin) suggesting no incremental benefit of performing the second test. This is particularly important as performing defibrillation testing can be associated with serious complications including post-shock stroke, heart failure, cardiogenic shock, embolic events and even death.4,5 Brignole et al.5 found that life-threatening intra-operative complications occurred in 22 (0.4%) patients out of a cohort of 5,501 patients.

With modern leads, devices and biphasic shocks the number of patients who fail DFT assessment has become small.6 A true probability curve is not constructed in most labs following implantation, the majority performing two DSM tests instead.3 Questions have been raised about the need or benefit for testing at all.7-9 Our data suggest that in a contemporary unselected cohort, very few fail a DSM test, irrespective of ICD indication. A successful first DSM test was predictive of two successful DSM tests suggesting the second test was unnecessary. In the Arrhythmia Single Shock Defibrillation Threshold Testing Versus Upper Limit of Vulnerability: Risk Reduction Evaluation (ASSURE) trial, 426 patients with standard ICD indications were prospectively studied to determine efficacy of DSM testing with a single VF induction and delivery of 14 J shock versus a vulnerability safety margin test (VSM);10 328 patients passed a DSM and/or VSM test at 14 J and two confirmatory 21 J shocks and were included in the analysis cohort. These patients had their device programmed to deliver the first shock at 21 J (10 J below the maximum output) and were followed for 9.5 ± 4.5 months. There were 45 treated episodes in 25 patients with the vast majority (85%) terminated with 21 J and all terminated at 31 J.

These findings were in keeping with the Low Energy Safety Study (LESS) trial11 in which 318 patients were programmed to a maximum output of 31 J during follow-up; 254 had successful defibrillation with 14 J shock at VF induction. Over a follow-up of 24 ± 12 months there were 112 VF/VT episodes with no difference in the success of the first or second shocks for termination of ventricular tachyarrhythmia whether the patients had an initial success at 14 J or underwent more extensive testing. A re-analysis of the LESS data found an initial shock at 14 J had a positive predictive accuracy that was not significantly different from that of two successful shocks at 17 J and 21 J.12

In contrast to the ASSURE and LESS trials (which used 14 J to defibrillate), we evaluated DFT at ≥10 J below the maximum output of the device. Whether we would have achieved the same results had we used 14 J instead is unknown. A recently published study in patients with a primary prevention indication and stable heart failure suggested that most patients had a low baseline DFT, in keeping with our study.13 That study also found that DFT testing did not predict long-term mortality or shock efficacy.

With the advent of modern leads and high energy devices, the strategy of double DSM testing may be unnecessary. We suggest a successful single DSM test with good sensing and prompt arrhythmia termination is adequate and does not require further VF induction at ICD implant. The need for DFT testing at all during ICD implant is under considerable debate and our data suggest that DFT testing may, in fact, be unnecessary in patients during ICD implant.

2. Curtis A. Defibrillation threshold testing in implantable cardioverter-defibrillators. Might less be more than enough? J Am Coll Cardiol 2008;52:557–8.