The treatment of anaemia in chronic heart failure (CHF) has many parallels with the treatment of anaemia in chronic kidney disease. Two major therapies are available, namely erythropoietin replacement therapy and intravenous iron supplementation, and both have been widely used in nephrology for the last 20 years. Indeed, both have become standards of care for treating anaemia in chronic dialysis patients, the majority of whom have inappropriately low circulating erythropoietin levels and negative iron balance. Erythropoiesis-stimulating agents (ESAs) are required to boost the production of red cells in the bone marrow, whilst intravenous iron will correct any iron deficiency and also lower the dosage requirements of ESA therapy. 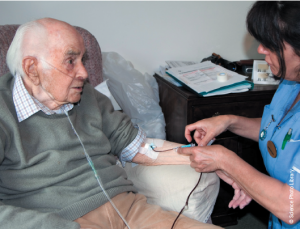 The situation in the anaemia of CHF is less advanced, but in recent years there has been increasing interest in the use of both of these treatment strategies. A few small clinical trials have suggested some potential benefits of stimulating erythropoiesis with ESA therapy in heart failure anaemia, whilst the administration of IV iron has shown similar benefits even in the absence of ESA therapy. Indeed, the recently published FAIR-HF (Ferinject® Assessment in patients with Iron deficiency and chronic Heart Failure) trial1 has opened the eyes of cardiologists to the potential for this latter treatment strategy to improve the symptoms and signs of heart failure.

The first report of the use of ESA therapy in treating patients with heart failure appeared in 2000 by Silverberg et al.2 This was a retrospective analysis of 142 patients with anaemia and CHF, of whom 26 were treated with subcutaneous erythropoietin and intravenous iron for more than six months. The mean haemoglobin level increased significantly, and this was associated with an increase in ejection fraction and New York Heart Association (NYHA) functional class. Lower doses of diuretics were needed during the study period, and there were fewer patients hospitalised than before. In a subsequent small, randomised controlled trial of 32 patients, Silverberg et al.3 confirmed these favourable findings on the same clinical end points. Mancini et al.4 then showed that in 26 anaemic patients with CHF, ESA therapy increased the haemoglobin concentration, and there was a concomitant increase in peak oxygen consumption (VO2) and exercise duration. Similar small studies from Italy5 and Greece6 provided additional evidence for the possible beneficial effect of ESAs in CHF, while Ponikowski et al.7 in 41 patients showed that darbepoetin alfa was able to increase and maintain haemoglobin levels, with a trend to improved exercise capacity.

Two large studies were then initiated.8, 9 Van Veldhuisen et al.8 found a significant increase in several quality of life measures with ESA treatment over a six-month study period, while the effect on six-minute walking distance showed a borderline statistically significant increase (p=0.074). In the STAMINA-HeFT (Study of Anemia in Heart Failure – Heart Failure Trial), 319 patients were treated with darbepoetin alfa or placebo for 12 months,9 and there was a non-significant favourable trend (HR 0.68 [95% CI 0.43,1.08]; p=0.10) with regard to its effect on the composite end point of all-cause mortality or first hospitalisation for CHF. A meta-analysis of 650 patients, of whom 363 had been treated with erythropoietin,10 showed that ESA treatment resulted in a lower risk of hospitalisation for CHF (risk ratio [RR] 0.59, 95% CI 0.41–0.86, p=0.006) while there was no significant effect on mortality (RR 0.69, 95% CI 0.39–1.23, p=0.21). These cautiously optimistic outcomes led to the design of the RED-HF (Reduction of Events with Darbepoetin alfa in Heart Failure) Trial.11 The RED-HF trial is targeted to enrol 2,600 patients with CHF and anaemia; the study was initiated in 2006 and has, to date, recruited more than 2,000 patients out of the projected 2,600, although recent recruitment has been slow.

Two randomised controlled studies of ESA therapy in the chronic kidney disease anaemia literature raised causes for concern in the entire study population,12,13 although curiously, the increased cardiovascular risk was not seen in patients with heart failure at baseline compared to those without heart failure. In TREAT (Trial to Reduce Cardiovascular Events with Arenesp® Therapy),13 patients with a history of CHF (n=1,347) seemed to fare better with darbepoetin alfa compared to those without CHF at baseline.14 Similarly, in a substudy of CHOIR (Correction of Anemia with Epoetin Alfa in Chronic Kidney Disease),12 the increased risk associated with targeting the higher haemoglobin level was not observed in patients with HF at baseline (hazard ratio 0.99), while in those without HF at baseline it was markedly increased (hazard ratio 1.86, p=0.004).15 Clearly there are limitations of both of these analyses, and the definitive answer regarding the benefits (or otherwise) of ESA therapy will hopefully come from the analysis of the RED-HF study.

Several studies have examined the efficacy and safety of intravenous iron supplementation alone in patients with CHF. Bolger et al.16 studied 16 patients with anaemia and mild-to-moderate CHF. In an uncontrolled study they showed that after intravenous administration of 1,000 mg iron sucrose during a two-week period, the haemoglobin concentration increased significantly after three months, while NYHA functional class, quality of life and walking distance improved.

The first controlled study was conducted by Toblli et al.17 Forty patients with mild anaemia (haemoglobin ≤12.5 g/dL) and iron deficiency (ferritin <100 µg/L, transferrin saturation [TSAT] <20%) were randomised to receive 200 mg intravenous iron sucrose or a saline control once weekly. At the end of the six-month study, patients who had received intravenous iron (n=20) had a mean increase in haemoglobin from 10.3 to 11.8 g/dL, and this was associated with improved renal function and lower NT-proBNP levels, while their left ventricular function, quality of life and six-minute walking distance all significantly improved. Interestingly, there were five hospitalisations for CHF in the control group, and none in the intravenous iron group.

The second European study (FERRIC-HF) by Okonko et al.18 randomised both anaemic and non-anaemic patients, all of whom had iron deficiency (ferritin level <100 µg/L, or a ferritin between 100–300 µg/L in combination with a transferrin saturation <20%). Of the 35 patients in this study, 18 were anaemic and 17 were non-anaemic. Twenty-four were randomised to initially receive weekly intravenous iron, with additional iron supplementation as required per protocol during the maintenance phase. Intravenous iron use was greater in anaemic than in non-anaemic patients (1,051 vs. 781 mg). Intravenous iron improved exercise capacity and symptoms of CHF, and the benefits were more evident in anaemic patients. Treatment was overall well tolerated and the clinical event rate was also similar.

The third and largest study by far in this field is the FAIR-HF study, published in November 2009.1 In this double-blind, placebo-controlled study, 459 HF patients with iron deficiency (ferritin level <100 µg/L, or a ferritin between 100–300 µg/L in combination with a TSAT <20%), with or without anaemia, were randomised to 2:1 treatment with weekly intravenous iron (ferric carboxymaltose, n=304) or saline (placebo, n=155) for a total period of 24 weeks. The primary end points of the study were patients’ global assessment and NYHA functional class (figure 1). Weekly iron therapy rapidly increased iron levels, and there was a modest increase in haemoglobin levels in those with anaemia at baseline (+0.9 g/dL, p<0.001 vs. controls), with no change in those who did not have anaemia at baseline (+0.2, p=0.21). Intravenous iron improved both primary end points: patients’ global assessment and NYHA functional class (both p<0.001). Interestingly, this beneficial effect was similar in patients with and without anaemia. Improvements were also seen for six-minute walking distance and quality of life measures. Intranevous iron was generally well tolerated, and there were no obvious differences in hard end points such as all-cause death (3.4% vs. 5.5%, for intravenous iron vs. control, respectively) and first hospitalisation (17.7% vs. 24.8%, respectively) between the two groups. A post hoc analysis of FAIR-HF has also suggested a possible improvement in renal function in the patients receiving intravenous iron compared to placebo.

Thus, there is now enough evidence for cautious optimism in the use of intravenous iron in patients with CHF. One of the particularly interesting findings in the FAIR-HF study was the fact that improvements were seen in both the anaemic and the non-anaemic groups, raising a hypothesis that perhaps iron replacement may initiate positive effects outwith the bone marrow, possibly on the cardiac myocyte.19 Further studies are required to confirm these findings, and to elucidate their aetiology.

Both ESA therapy and intravenous iron supplementation have been the subject of careful study in patients with CHF over the last few years. The definitive study of the use of ESA therapy in patients with CHF is the RED-HF trial,11 which is ongoing, and which will unquestionably provide valuable data to address this topic. The FAIR-HF trial1 generated encouraging data, albeit with ‘soft’ but meaningful end points, and there is certainly enough optimism from this study to justify further research in the potential role of intravenous iron in improving symptoms and outcomes in patients with CHF.

Disclaimer: Any UK prescribing information within the pdf of this is only current at the date of publication. Medinews Cardiology Limited advises healthcare professionals to consult up-to-date Prescribing Information and the full Summary of Product Characteristics available from the manufacturers before prescribing any product. Medinews Cardiology Limited cannot accept responsibility for any errors in prescribing which may occur.
THERE ARE CURRENTLY NO COMMENTS FOR THIS ARTICLE - LEAVE A COMMENT