Cardiovascular disease is one of the leading causes of morbidity and mortality among the elderly,1,2 and interventional cardiologists are well aware that they are treating an increasing number of very elderly patients. It is clearly good news that life-expectancy is increasing and that more patients remain alive and active well into their eighties and nineties. While there is no obvious pathophysiological rationale for elderly patients to have a different therapeutic response to cardiovascular treatments there are important issues to consider. 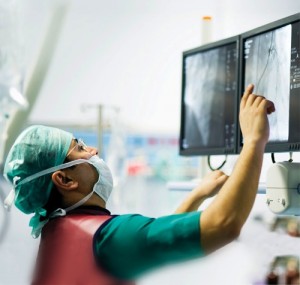 First, there is a much higher incidence of comorbidities in the elderly, which increases the potential for complications and may limit the scope for symptomatic improvement. For example, there may be little point in treating exertional angina when the patient is more limited by an arthritic knee. Second, care needs to be exercised when considering the benefits of prognostic interventions in a group that statistically have a relatively short remaining lifespan. These concerns emphasise the importance of studies specifically examining the response of the elderly to cardiovascular treatments – historically an area that has been overlooked. We need data if we are to determine whether cardiac interventions in the old are effective or intrusive.

It is, therefore, very welcome that in this edition of the British Journal of Cardiology, Rana et al.3 publish a paper investigating short-term survival at 30 days and long-term survival at four years, in 294 patients over the age of 85 years undergoing percutaneous coronary intervention (PCI) for acute coronary syndrome (ACS) (see pages 27–31). They show that one-year mortality rates were 17.7% in this group of patients. They also found that there were no significant differences in rates of mortality between patients having PCI electively or for the treatment of ACS. In addition, in elderly patients who underwent revascularisation during the index admission, there was a larger absolute reduction in mortality at six months compared with patients <70 years of age (7% vs. 1.8%, respectively). The authors conclude that PCI appears to be safe in this elderly group of patients.3

How does this information from the group in Bournemouth compare with previous studies? In current practice, up to 25% of all PCIs are performed in patients over the age of 75 and 12% are performed in those aged over 80 years, and this number has increased steeply over the past decade.4,5 Although clinical trials have generally excluded elderly patients, a number of observational studies have investigated outcomes after PCI in elderly patients. A large observational study carried out in New York between 2000 and 2001 investigated outcomes after PCI in 82,140 consecutive cases. This was a multi-centre study that reported in-hospital mortality and major adverse cardiac events (MACE) following both elective and emergency procedures in <60, 60–80 and >80 years of age. They concluded that in-hospital mortality and MACE were highest in the >80 age group at 11.5% and 13.1%, respectively.6 In a European registry of 47,407 consecutive patients from 2005 to 2008, there were over 8,000 patients aged >75 years.5 They separately analysed ACS patients and elective patients undergoing PCI. This study concluded that patients aged 75 and over were at higher risk of in-hospital death and age was an independent risk factor, even after adjustment for baseline characteristics and severity of coronary artery disease.

Increased risks of PCI in the elderly

We know from experience that elderly patients have an increased risk of procedure-related complications, which are associated with higher mortality rates. A recent study in the USA, between 2001 and 2006, observed a decreasing rate of in-hospital mortality among patients aged >80 years.4 However, mortality was still five-times higher in this group than those aged <80 years. Mortality in the elderly group represented almost 30% of all deaths related to PCI. Similar differences in mortality in the elderly versus young after PCI were seen in a European study.5

Nearly all studies have shown increased risk of access-related complications and associated bleeding events in elderly patients.5 Studies have also demonstrated a higher risk for in-hospital stroke in elderly patients.7,8 This increased risk of vascular complications in the elderly is likely to be due to a higher prevalence of native vascular disease and, therefore, a greater risk associated with medical therapy after PCI.8,9

In addition, elderly patients have an increased risk of contrast-induced nephropathy (CIN) following PCI. Since elderly patients generally have more complex lesions, requiring greater amounts of contrast during procedures, the risk of CIN increases in this cohort. We already know from studies that CIN has been associated with early and late mortality.10

Quality of life in the elderly after PCI

An American study measured quality of life using the Short Form Health Survey (SF36) at six months following PCI in 55 patients aged over 80 years compared with younger patients.11 They concluded that benefits of PCI were at least equal to younger patients as compared with the elderly.11 In addition, the TIME study (Trial of Invasive Versus Medical Therapy in Older Patients) showed significant improvements in quality of life after revascularisation.12

Lowering risk of PCI in the elderly

Over the last 10 years, a number of therapeutic developments have reduced in-hospital complications following PCI. Some of these include the growth of drug-eluting stents and increased use of transradial access. In 2011, 58.5% of all PCIs in the UK were undertaken using transradial access. This is a dramatic rise from only 10.2% in 2004.13 The benefits of radial over femoral approach are reduced access-site complications, earlier ambulation of patients and increased patient satisfaction.14 In the elderly, early ambulation is particularly important since this group of patients have an increased risk of venous thromboembolism and hospital-acquired infections.

Recently, one of the largest randomised trials investigating femoral versus radial access for PCI (the RIVAL study – Radial Versus Femoral Access for Coronary Intervention) compared a total of 7,021 patients undergoing PCI after ACS.15 In this study, at 30 days, there were no significant differences in rates of death, myocardial infarction, stroke or non-coronary-artery-bypass-graft-related major bleeding. However, the rates of local vascular complications (including pseudoaneurysm requiring closure and large haematoma) were significantly higher in the femoral group compared with the radial group. The study concluded that both radial and femoral approaches are safe and effective for PCI.15 However, the lower rates of local vascular complications may be a reason to use the radial approach for PCI. Since elderly patients have significantly higher baseline risk of arterial access complication,16 the reduced rates of lower local vascular complications may be beneficial in this group.

With the increase in the elderly population, the proportion of these patients undergoing PCI has increased considerably. The elderly are, unsurprisingly, at higher risk for mortality and morbidity following PCI, and this is despite adjusting for baseline characteristics. However, the elderly appear to derive significant benefits in terms of quality of life. PCI is clearly effective in old age but a careful and holistic approach to patient selection is essential to get the best outcomes.

Impact of COVID-19 on primary percutaneous coronary intervention centres in the UK: a survey

COVID-19 and care of the elderly