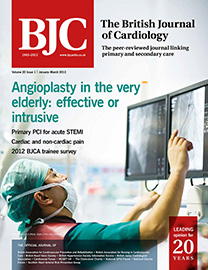 The BJC – leading opinion for 20 years

Twenty years ago, when we launched the British Journal of Cardiology (BJC) our intention was to produce a peer-reviewed journal, which linked cardiologists and general practitioners (GPs) with an interest in cardiovascular medicine. We have not waivered and, indeed, have grown to be a unique publication widely read across both primary and secondary care, leading opinion for 20 years.

Cardiovascular disease is one of the leading causes of morbidity and mortality among the elderly,1,2 and interventional cardiologists are well aware that they are treating an increasing number of very elderly patients. It is clearly good news that life-expectancy is increasing and that more patients remain alive and active well into their eighties and nineties. While there is no obvious pathophysiological rationale for elderly patients to have a different therapeutic response to cardiovascular treatments there are important issues to consider.

Underuse of beta blockers in patients with heart failure

The 2012 British Junior Cardiologists Association (BJCA) survey of cardiology trainees gives an important insight into what is happening in cardiology training in the UK.1,2 Conducted six times since 2004, it was most recently performed in 2009. The authors should be congratulated on the effort that has clearly been involved. Several important issues emerge from these data, which, if the survey is truly representative of all UK trainees, necessitate some radical thinking. The issues that I shall discuss are: working hours and the role of general medicine, imaging training, and the percentage of female trainees.

This single-centre, retrospective, cohort study aims to provide insight into the long-term survival of patients ≥85 years old undergoing percutaneous coronary intervention (PCI) over a four-year observational period in a high-volume PCI centre. Between 2006 and 2010, 294 patients (mean age 88 ± 2 years, 56% male) underwent PCI at our institute. A total of 180 patients (61.2%) had an acute coronary syndrome (ACS) defined as unstable angina, non-ST elevation myocardial infarction (NSTEMI) or ST-elevation myocardial infarction (STEMI). One hundred and fourteen patients underwent PCI electively (38.8%).  The primary outcome was all-cause 30-day and one-year mortality rates. In-hospital, 30-day and one-year mortality rates were 2.4% (7 patients), 4.4% (13 patients) and 17.7% (52 patients), respectively, in the entire cohort. In addition, 30-day (5.6% vs. 3.4%, p=0.24) and one-year (20.0% vs. 14.0%, p=0.19) mortality rates were similar between the ACS and elective patients, respectively. Following multi-variable analysis, age (hazard ratio [HR] 1.14, 95% confidence interval [CI] 1.04 to 1.26), male sex (HR 1.85, 95% CI 1.01 to 3.42), previous PCI (HR 2.74, 95% CI 1.36 to 5.56) and the presence of shock (HR 15.39, 95% CI 6.67 to 35.50) emerged as independent predictors of one-year mortality rates. We conclude that PCI appears to be a safe treatment option in very elderly patients with good one-year survival rates. Future randomised-controlled trials should specifically include this age group to guide interventional cardiologists in making decisions when faced with this very challenging cohort.

Primary percutaneous coronary intervention (PCI) has become treatment of choice for ST-elevation myocardial infarction (STEMI) in England. The assumption in most trials, and in their translation into clinical practice, is that centralisation of primary PCI for STEMI into large facilities is inevitable and essential. We feel that a successful and preferable primary PCI service can be delivered in a medium-sized district general hospital (DGH).

We performed a retrospective analysis of the first 18 months of primary PCI for STEMI in our unit. We compared our results with standards set out in the National Infarct Angioplasty Project report. Our median call-to-balloon time was 95 minutes and median door-to-balloon time was 50 minutes. Door-to-balloon times were shorter during working hours than out of hours, and were shorter for patients taken directly to the catheterisation laboratory than those admitted via A&E. During the period of assessment, 14% of patients experienced a major adverse cardiovascular and cerebrovascular event (MACCE). The overall mortality rate was 6.7%. No patients were transferred to our surgical centre for emergency treatment.

We believe our data demonstrate that a system utilising regional Heart Attack Centres is not essential for satisfactory clinical outcomes, and may not be the preferred choice for patients and their ongoing post-myocardial infarction care. Expansion of PCI services in well-organised DGHs may be an equally good solution.

How to untie a transfemoral catheter knot with a transradial Lasso

Eliminate non-cardiac chest pain. Or rather, eliminate the expression. Cumulative irritation over several years leads me to comment on the readiness of doctors to use this, and ‘atypical chest pain’, as a diagnosis, and even carry out trials to assess treatment. To study a condition defined by what it is not seems weird; perhaps some people also describe non-brain head pain or atypical abdominal pain?

Current European Society of Cardiology guidelines state that in troponin-negative acute coronary syndrome with no ST-segment change on electrocardiogram (ECG), a stress test is recommended. In the UK, exercise tolerance testing (ETT) is currently the most common first-line test. The high proportion of false-positive and inconclusive results often mandates second-line tests. We compared the diagnostic accuracy and cost implication of computed tomography coronary angiography (CTCA) as first-line investigation compared with ETT. We hypothesised that CTCA would outperform ETT because of its excellent negative-predictive value.

Our results suggest that it is feasible to use CTCA to investigate patients with acute low-to-intermediate likelihood chest pain in place of ETT at no extra cost. Moreover, this cost analysis only took into consideration the actual cost of investigation. Three US clinical trials have shown that CTCA in the emergency room can substantially reduce patient length of stay, reducing overall cost further. CTCA also recognises non-obstructive coronary atheroma, which, combined with clinical risk factors, may prompt the physician to initiate secondary prevention medication earlier.

Three abstracts of outstanding quality were presented for the Young Investigators' Award at the British Society of Heart Failure's 15th Annual Autumn...

News from the 7th Annual Scientific Meeting of the Cardiorenal Forum

This year's 7th Annual Scientific Meeting of the Cardiorenal Forum looked at diabetes and other co-morbidities in relation to cardiorenal disease. The meeting was...