The antibody molecule: from antitoxins to therapeutic antibodies 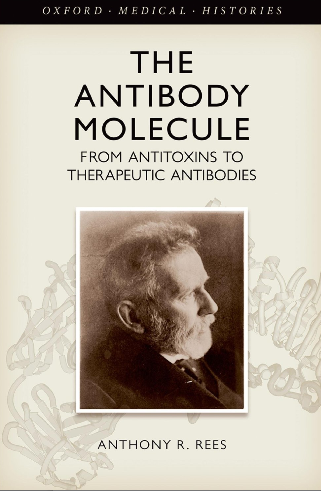 The field of immunology cuts across all disciplines in biology, including cancer, heart disease, organ transplantation, and many others. Most human diseases can be traced to an immunologic or inflammatory component. While researchers strive to understand the immuno-pathogenesis of vascular disease and to develop a vaccine to conquer atherosclerosis, we may need to broaden our own horizons and revisit the basic principles underlying how the human immune system works. Where better to start than the antibody. The BJC is therefore reviewing The antibody molecule, a new publication from Oxford University Press, which provides a historical perspective of immunology as glimpsed through the journey of the medics and scientists who shaped the course of medical advances in the field of immunology.

This book covers the historical discovery of antibodies, before bringing us up to the present day and beyond. It provides a detailed selection and discussion of what the author considers the key developments that have shaped our understanding of the roles that antibodies play in the immune system and how these ideas have transformed modern healthcare through a biotechnological revolution in therapeutic applications. Anthony Rees has sought out the key references that cover these developments, many of which are not readily available online. Consequently, he has sought the help of science historians, archivists and librarians at key institutions from around the world. In discussing these documents, he describes and illustrates the academic disagreements, arguments and sometimes drawnout disputes that have contributed to driving forwards progress. It makes for an interesting book that illustrates how scientific progress often results from personality clashes, delays, and forays into blind alleys.

The early chapters deal with the origins of immunology by tracing the observations of Edward Jenner on the use of variolation with cowpox to protect against smallpox and the work of scientists such as Alessandro Bassi, Jakob Henle, Robert Koch and Louis Pasteur on establishing the nature of the causative agents of infectious diseases. Methods developed to treat diseases such as rabies by vaccination with attenuated viruses are discussed before we are taken through early attempts to derive a mechanistic understanding of these observations from the likes of Elie Metchnikoff, Emil von Behring and Paul Ehrlich. Anthony Rees then explains how application of the rules of chemistry led to an understanding of the structural and molecular basis of antibodies from Karl Landsteiner, Hsien Wu, Linus Pauling and Elvin Kabat. The next historical era considered is when there was a need to understand the biology that underpinned the observed structural diversity of antibody responses. The principle protagonists in this stage included Niels Jerne, Frank Dixon, David Talmage, Gustav Nossal and Frank Burnet, who established the now familiar clonal selection theory for how the immune system responds to infection.

My own academic career in antibody research started in the late 1970s when I was lucky enough to obtain a research studentship supervised by César Milstein in the Laboratory of Molecular Biology in Cambridge, where Fred Sanger was still establishing the pioneering technologies for DNA sequencing that would eventually lead to whole genome sequencing. This was a time when a bridge was made between a detailed understanding of the structural basis of the antibody molecule as a protein, with paired heavy and light chains in a now familiar Y-shaped molecule, and the detailed understanding of the genetics underpinning the structural diversity of antigen recognition and functional diversity. From this point in the book I found myself on familiar ground.

What follows are chapters covering the detailed understanding of antibody function, including discussions of the role of classes and subclasses and their interactions with the complement and Fc receptor systems. The discovery and cloning of the various classes of Fc receptors by researchers such as Janet Allen, Clark Anderson and Jeffrey Ravetch, the postulation of placental transport and catabolism receptors by Francis Brambell, and the cloning and expression by Neil Simister are all discussed extensively. Alongside these topics, the analysis of the motifs on antibody classes and subclasses that determine their functional interactions with the effector systems are covered.

Finally we move into the era of biotechnology and therapeutic applications with discussions of modeling and engineering of antibody V-regions including antibody humanisation, in vitro display of natural and synthetic libraries of V-genes, and a discussion of the elucidation of the mechanisms of antibody somatic hypermutation. All of the key players in this era are discussed, with individuals such as David Baltimore, Tasumu Honjo, Michael Neuberger, César Milstein and Greg Winter and their work covered in detail. In addition, as expected given Anthony Rees’ own contributions to the study of antibodies, there is a detailed discussion of the role of modeling of proteins. There is also a brief discussion of some of the more unusual applications of artificially constructed bifunctional and bispecific antibodies and two chapters on therapeutic case studies, the first being the development of an anti-respiratory syncytial virus (RSV) antibody palivizumab for the prevention of RSV illness, and the second being the targeting of breast cancer with the anti-HER-2 antibody trastuzumab. In the final chapter, Anthony Rees predicts that future advancements lie in areas such as intracellular targeting, getting antibodies to reliably cross the blood brain barrier, and also in transplacental foetal therapy.

Anthony Rees has researched and written a book that is as much about the players who made the discoveries, as it is about the discoveries themselves. This approach makes this book an enjoyable read and I would thoroughly recommend it to anyone who wants to learn about the stories that lie behind the modern textbook understanding of the antibody molecule and its therapeutic applications.