A recent randomised, controlled pilot study has shown significant stabilisation of the cardiovascular system in patients suffering from septic shock when treated with CytoSorb®, a purification technology that uses biocompatible, highly porous polymer beads which act like sponges to actively remove harmful substances from the blood. 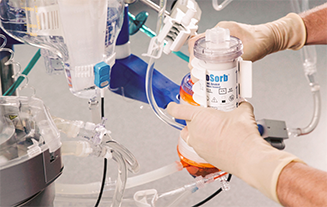 The technology is already used to treat inflammation in critically ill and cardiac surgery patients as an early standalone (I.e. without combined renal replacement) therapy for extracorporeal cytokine removal. It is designed to reduce the ‘cytokine storm’ or ‘cytokine release syndrome’, a major contributing factor in inflammation.

The controlled study of 20 patients was conducted by a team at the Department of Anesthesiology and Intensive Therapy of the University Szeged in Hungary, led by Professor Zsolt Molnar. They investigated the effects of a single treatment of extracorporeal cytokine removal with CytoSorb® therapy, in addition to standard treatments such as antibiotics, applied in patients with early stage septic shock (within the first 24 hours after onset of septic shock or after intensive care unit (ICU) admission).

The results, published in the Journal of Critical Care (doi: 10.1016/j.jcrc.2018.11.003) show a significant decrease of Big-endothelin 1, which is involved in the pathologic changes of the vascular system; procalcitonin, an important marker of inflammation; and norepinephrine doses needed to maintain sufficient cardiovascular function. The required norepinephrine doses dropped by almost 70% from baseline within 48 hours, in comparison to the control group; representing an important patient improvement.

CytoSorb therapy is also being investigated in another study (REMOVE), a 250 patient randomised, controlled, multi-centre clinical trial in Germany, designed to evaluate the safety and efficacy of intraoperative use of the technology during valve replacement surgery and cardiopulmonary bypass in endocarditis.