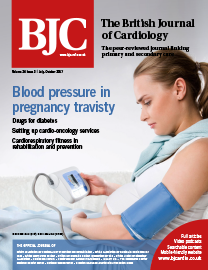 Self-monitoring blood pressure in pregnancy: is this the way forward?

Hypertension is a significant problem, both in the general population and among pregnant women, with around one in 10 women experiencing a form of hypertensive disorder during pregnancy.1 It is the third most common direct cause of maternal mortality worldwide, after haemorrhage and infection,2 and is also associated with adverse affects to the baby, including intrauterine growth retardation, premature delivery and respiratory distress syndrome.3

Are NOACs safe in catheter ablation of atrial fibrillation?

Atrial fibrillation (AF) is known to increase stroke risk and can be stratified clinically by the CHA2DS2-VASc scoring system, which then informs recommendations for long-term anticoagulation. Susceptibility to thromboembolism is also increased around the time of catheter ablation of AF. Mechanistically, this is accounted for by endothelial injury, hypercoagulability due to contact of blood with foreign surfaces and altered blood flow after conversion to normal sinus rhythm (figure 1).1 The risk of stroke persists post-ablation, even in patients with low CHA2DS2-VASc scores, as the atria may remain stunned for several weeks post-ablation, and the endothelium takes time to heal. This phenomenon forms the rationale for guidelines currently recommending anticoagulation for two to three months post-ablation.2

Brugada syndrome in the context of a fever: a case study and review of current knowledge

Brugada syndrome is a distinct arrhythmogenic disorder widely recognised as a sudden cause of death in the young. It is identified by a classical ST-segment elevation on electrocardiogram (ECG) that may be provoked in the context of a fever or vagal stimulation. The pathophysiology and genetic basis have been elucidated as an abnormality in ion channels. Diagnosis takes into account, not only the ECG, but clinical features and modulating factors; the inducibility of a suspect ECG when febrile is one such observation. Anti-arrhythmic drugs like ajmaline can also induce Brugada syndrome and have a role in its work-up. Electrophysiology studies may be useful in assessment and risk stratification of select cases. The management is centred around device therapy with the implantable cardioverter defibrillator (ICD), though pharmacological treatments are being actively pursued.

Multiple left atrial masses in a patient with breast cancer

This is a rare case with dramatic image of multiple clot formation in the left atrium in a patient with mitral stenosis when anticoagulation was stopped for a few days before cancer surgery.

The age of diagnostic coronary angiography is over

Spasm after transradial approach for catheterisation decreases procedural success and offers discomfort to the patient. Nitroglycerin is one of the drugs applied prophylactically to prevent spasm. The aim of this study was to assess the effect of preventive nitroglycerin on the comfort of patients during cardiac catheterisation.

A total of 328 patients were randomly assigned to receive either 200 µg nitroglycerin (n=164) or placebo (n=164). The main outcome was the evaluation of spasm using a visual analogue scale to measure the pain of the patient, and procedural time and radiation used to measure the operator difficulty during the examination.

In conclusion, the prophylactic use of nitroglycerin offers no advantage in terms of comfort to the patient during cardiac catheterisation by a transradial approach. Although there was difference in operators’ perception of spasm, omission of vasodilator does not cause any objective difficulty to operators.

A review of endomyocardial biopsy and current practice in England: out of date or underutilised?

Endomyocardial biopsy (EMB) has been long established as a diagnostic tool in myocardial disease. EMB surveillance for rejection of cardiac allografts continues to be routinely performed. However, the use of EMB beyond transplant monitoring is controversial. In recent years, the procedure has fallen out of favour. This is most likely due to the growing capabilities of non-invasive imaging modalities and the questionable impact of EMB findings on treatment.

This article aims to examine current practice of EMB in England, discuss the utility of EMB in myocardial diseases and compare prominent society guidelines from recent years. Information gained from freedom of information requests shows just 18% of NHS trusts reported performing EMB, and only 46% referred to other centres for EMB in England in 2014–2015. Despite the limitations of EMB, it remains the only procedure capable of obtaining a histological diagnosis of cardiac disease.

Glitazones improve glycaemic control in type 2 diabetes mellitus (T2DM) by increasing whole-body insulin sensitivity. They can cause fluid retention and are, therefore, contraindicated in heart failure. A 2007 meta-analysis linked rosiglitazone with an increased risk of myocardial infarction, leading to its European marketing authorisation being suspended in 2010. Pioglitazone has demonstrated cardiovascular safety for atherosclerotic events in a large, randomised, placebo-controlled trial. A 2016 study in patients with insulin resistance and recent cerebrovascular event showed pioglitazone was associated with reduced risk of further stroke or transient ischaemic attack when compared with placebo, as well as reduced diabetes incidence.

A sixty-two-year-old asymptomatic man presented for a routine insurance medical. He had no previous cardiac history, nor any significant cardiac risk factors. His examination was normal. His electrocardiogram (ECG), however, was noted to be significantly abnormal, with deep anterior T-wave inversion in the precordial leads (figure 1). Given this abnormality and the potential differential diagnoses, a cardiovascular magnetic resonance (CMR) (Siemens Aera 1.5 T) with regadenosine stress perfusion was performed and images analysed using CMR 42 software (Circle CVI, Calgary).

The theme running through the recent 2017 British Cardiovascular Society (BCS) Annual Conference was ‘Cardiology at the extremes’. Few conditions in medicine can...