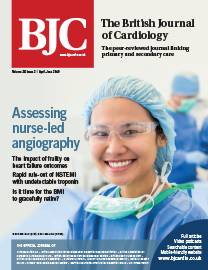 Should invasive coronary angiography be performed by non-cardiologist operators?

The concept of nurse-led angiography was first introduced in the UK just over two decades ago. This was in response to concerns raised following implementation of the Calman report.1 The Calman report recommended a structured training programme for cardiology registrars, thus, achieving clinical competence at a faster rate, with a view to filling anticipated consultant vacancies. However, it was presumed that this would negatively impact clinical service delivery. One particular concern was that there would be a reduced number of registrars available and able to perform coronary angiography. There was a fear that this shortfall would lead to reduced throughput within cardiology centres. Boulton et al. described a potential solution to this shortfall: the training of a clinical nurse specialist to perform coronary angiography.2 The aim was to teach the nurse-angiographer the technical skills to undertake coronary angiography, with a head-to-head comparison of procedural time, radiation exposure, and complication rate. The results were impressive with the nurse-angiographer demonstrating a numerical reduction in complication rate and fluoroscopy time. These results were similar to those of DeMots et al., who trained a physician assistant in Portland, Oregon to perform coronary angiography with a view to reducing the workload of trainee cardiologists.3

In this issue of the British Journal of Cardiology Yasin et al. describe the implementation of nurse-led angiography at Wycombe Hospital. Although not novel, the findings are certainly interesting. They performed a comparison of nurse-led coronary angiography with registrar-led angiography in an observational study of 200 patients. They examined procedural time, radiation exposure, contrast load and complication rates. Albeit small numbers, they demonstrated that nurse-led angiography was associated with a reduction in radiation and contrast load, concluding that a non-medical operator can be taught the technical skills required to perform coronary angiography safely. However, the observational nature of this study limits the conclusions that can be drawn. Although appropriate at an early level of training, the patients that underwent nurse-led angiography were a highly select ‘safe’ patient group, and, without baseline characteristics, it is not possible to determine if one arm of the study had more comorbidities than the other.

Should we be targeting people with diabetes when screening for atrial fibrillation?

Atrial fibrillation (AF) and diabetes are chronic conditions, which are increasing in prevalence. Stroke is a recognised complication of both conditions and can often be prevented through detection and appropriate intervention. Screening for disease has also improved over the last few decades through a plethora of tools and advances in technology. AF impacts physically, psychologically, socially and economically, and does not always present with symptoms. AF can be detected through electrocardiogram (ECG) monitoring and pulse checks, with high-risk groups typically targeted. When AF is detected, medication to control heart rate and anticoagulation can be started to reduce subsequent risks. AF is underdiagnosed in the community, particularly in the elderly, and the condition lends itself to screening.1

A review of the evidence for AF screening demonstrates a lack of homogeneity, with different target populations. High-risk groups have varied and include those with hypertension, stroke, myocardial infarction, older age and diabetes. Although the pathophysiological relationship between AF and diabetes is not entirely understood, there is an acceptance that the coexistence imposes greater risk to the patient in terms of comorbidities including stroke.

Studies have suggested that acute coronary syndrome (ACS) may be excluded by a single undetectable high-sensitivity troponin (hs-TnT) taken at least three hours after the onset of symptoms in patients with non-pleuritic chest pain whose electrocardiogram (ECG) is non-ischaemic.

During a six-month period between April and September 2015, we identified 147 consecutive patients with non-pleuritic chest pain and non-ischaemic ECG whose first hs-TnT was less than 5 ng/L at least three hours after the onset of symptoms. We used the Elecsys hs-TnT assay, which has a lower limit of detection of 5 ng/L and a 99th centile of <14 ng/L.

Sixty-seven of 147 (46%) patients were male. The average age of our cohort was 52 years, range 19–83 years. Coronary heart disease (CHD) was known to have been present in 24 (16%) before the index admission. Median length of hospital stay was 15.4 hours (mean 22.5 hours) with 86 (59%) patients spending more than 12 hours in hospital. We referred 60 (41%) patients to cardiology for further assessment, either during or after admission, in order to rule out unstable angina. No patient was readmitted with hs‑TnT positive ACS, one patient underwent elective revascularisation and no patient died during one year of follow-up. Only one patient was lost to follow-up.

In conclusion, patients with non-pleuritic chest pain, non-ischaemic ECG and undetectable hs-TnT at least three hours after the onset of symptoms have a low risk of hs-TnT positive ACS, revascularisation and death during one year of follow-up. Most such patients could safely be discharged from hospital after a few hours of observation, without the need for a second hs-TnT.

Frailsafe was developed by the British Geriatrics Society as clinical criteria to accurately identify patients at risk of frailty-associated harm on admission to hospital. There is no single validated tool for assessing frailty in heart failure on admission to hospital. The aim is to determine the prevalence of frailty-associated harm and the outcomes of older persons admitted to hospital with decompensated heart failure using Frailsafe screening criteria.

A retrospective cohort study of consecutive patients aged 75 years and over, admitted to hospital with decompensated heart failure within a six-month period was performed. Frailsafe screening criteria were applied to each patient retrospectively and data on length of stay, inpatient mortality, six-month mortality and readmission at six months was collected for all patients. The outcomes were analysed using univariate analysis comparing the patients ‘at risk of frailty-associated harm’ with those ‘not at risk’.

In conclusion, prevalence of patients at risk of frailty-associated harm measured by Frailsafe in an older population admitted with decompensated heart failure was 27%. Such patients had a longer length of stay, and were at increased risk of readmission and mortality within the following six months. Future research should include analysis of confounding variables, such as comorbidity, in a larger population to aim to identify how to improve outcomes in this particularly high-risk group.

Infective endocarditis (IE) is an increasingly common disease associated with significant morbidity and mortality. It is known that the incidence of IE has been rising globally, but the reasons for this rise are not fully understood. This study sought to investigate the epidemiology of IE in a UK population, with a review of mortality outcomes based on current clinical practice.

What are we?* The BMI should accept terms for a graceful retirement
*with apologies to The Bunyip of Berkeley’s Creek

Body mass index (BMI) was first proposed in 1835 as a way to standardise body composition assessment for people of different heights, at a time when malnutrition was the main public health concern. BMI has been considered appropriately as a part of nutritional assessment in populations. It is not, however, a useful tool for assessment of individuals because there is so much individual variability in body composition and in its impact on health outcomes. Similarly, high BMI does not distinguish between excess body fat (bad for health) and large muscle mass (good). In contrast, we propose that individuals need to be assessed using clinical criteria, monitored over time to trigger different interventions. A diagnosis of obesity should be based on estimates of body fat (BMI, now being replaced by percentage body fat) at a particular age, and a clinical staging system.

Coronary physiology is the collective term for a group of indexes aimed at directly measuring the intracoronary haemodynamic changes that occur across a stenosis in order to guide revascularisation decision-making. Fractional flow reserve (FFR) uses pharmacological dilatation and miniaturised pressure-wires to measure coronary pressure proximal and distal to a stenosis, thereby estimating flow reduction across a stenosis. Several clinical trials have shown that FFR-guided revascularisation improves clinical outcomes, and that deferring revascularisation in patients shown by FFR to have non-haemodynamically significant lesions is safe. Instantaneous wave-free ratio (iFR) is a novel technique that measures the ratio of distal coronary to aortic pressure during a specific period in diastole that obviates the need for pharmacological vasodilatation. Recent randomised-controlled trials have shown iFR to be non-inferior to FFR with respect to major adverse cardiac events, while reducing adverse procedural symptoms and procedure duration.

Advanced nursing roles supported by competency-based training have been pioneered over the last 25 years, with emphasis on the development of specific medical skills. This has largely been influenced by increasingly complex medical needs, costs of healthcare and the significant reduction in available doctors. With this reduction of doctors in training and departmental support for expanding nursing roles, we devised a local initiative to train an experienced nurse to perform diagnostic coronary angiography. Our aim was to provide a safe and enhanced service and improve procedural efficiency within the cardiac day unit.

A prospective audit of 250 coronary angiography procedures was performed in the training period between 24 September 2014 and 9 October 2015. Post-training, 143 procedures were performed between 12 October 2015 and 20 July 2016. The prospective audit was performed to explore the safety, effectiveness and quality of nurse-delivered diagnostic coronary angiography. An audit form was created to assess each component of the procedure. This included, gaining patient consent, success in gaining arterial access, success in intubating the left and right coronary arteries, observation of haemodynamics, observation of complications and reporting the findings. Financial impact, patient satisfaction and staff perception outcomes were also audited.

When directly compared with contemporaries, nurse-delivered diagnostic coronary angiography resulted in successful and appropriate arterial access, successful intubation of both coronary arteries, safe monitoring throughout the procedure and correct reporting of each study, with a similar level of patient satisfaction.

In conclusion, this study demonstrates that nurses can, under the right supervision and governance, perform diagnostic coronary angiography to a safe, highly effective standard, which is equivalent to contemporaries.

Over 50,000 cardiac implantable electronic device procedures are undertaken annually in the UK. Despite prophylactic measures, device infection still occurs. Anaphylaxis following teicoplanin is extremely rare with evidence limited to case reports and one case series. We present two fatal cases of anaphylaxis following teicoplanin administration. Both cases meet the World Allergy Organisation definition of anaphylaxis. These cases highlight the importance of anaphylaxis to teicoplanin as a procedural complication. Despite prompt treatment, this reaction was fatal. Operators should be aware of this risk in an era of increasing procedures and rising incidence of anaphylaxis.

An unusual cause of pericardial tamponade in pregnancy

Pericardial involvement is sporadic during pregnancy. We present the case of a young woman who presented to the emergency department with a short history of rapidly progressive dyspnoea in her 38th week of pregnancy. Coronary arteriovenous fistula (CAVF) has been uncommonly described as a cause of pericardial effusion. We believe this is a rare case of a CAVF presenting as cardiac tamponade in pregnancy.

The American College of Cardiology (ACC.19) Annual Scientific Sessions represents one of the most exalted venues for investigators to present the latest studies...

A new infective endocarditis information card is available to help healthcare professionals meet the latest guidance for this...