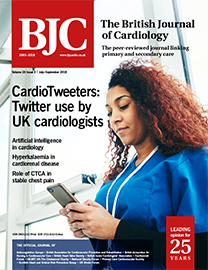 CardioTweeters: an analysis of Twitter use by UK cardiologists

Twitter is a web-based micro-blogging service in which messages called ‘Tweets’, which may include visual media, are shared with followers of the account. Benefits include continuing education, networking and personal branding. This article examines the current use of Twitter among UK-based cardiologists, and General Medical Council guidance on social media interaction.

There were 301 UK cardiologists identified. The most common location was London, the sub-specialty intervention, and the majority were consultants. Most had tweeted within the past month, and over 100 times. Content analysis of Tweets revealed 64% were cardiology-related, and 80% related to cardiology/medicine/science.

In conclusion, Twitter has been adopted by a relatively small group of UK cardiologists, but evidence suggests that those who have find it useful. While professionalism and patient confidentiality remain valid concerns, Twitter should be promoted as a location-independent, time-efficient way to network, and keep pace with current research and practice.

The introduction of such digital technologies as robotic implants, home monitoring devices, wearable sensors and mobile apps in healthcare have produced significant amounts of data, which need to be interpreted and operationalised by physicians and healthcare systems across disparate fields.1 Most often, such technologies are implemented at the patient level, with patients becoming their own producers and consumers of personal data, something which leads to them demanding more personalised care.2

This digital transformation has led to a move away from a ‘top-down’ data management strategy, “which entailed either manual entry of data with its inherent limitations of accuracy and completeness, followed by data analysis with relatively basic statistical tools… and often without definitive answers to the clinical questions posited”.3 We are now in an era of a ‘bottom-up’ data management strategy that involves real-time data extraction from various sources (including apps, wearables, hospital systems, etc.), transformation of that data into a uniform format, and loading of the data into an analytical system for final analysis.3

A recent survey of healthcare professionals confirms that hyperkalaemia is considered as a common and important clinical issue for patients receiving renin-angiotensin-aldosterone-system (RAAS) inhibitors in particular. Successful interventions to manage hyperkalaemia appear beneficial rather than avoidance or dose reduction of these RAAS inhibitors in patients with chronic heart failure, diabetic nephropathy or prior myocardial infarction.

A 55-year-old man with suspected community-acquired pneumonia and atrial fibrillation was found to have a very large left atrial myxoma complicated with a pulmonary triad – pulmonary hypertension, pulmonary infarction, and pulmonary lymphadenopathy. The myxoma was successfully removed and complete resolution of all three pulmonary complications followed. He re-presented two weeks post-surgery with atrial flutter, which was medically treated and considered for ablation. We have taken the opportunity to undergo a mini-literature review on myxoma and its pulmonary complications.

Furthermore, traditionally, the aetiology of heart failure or left ventricular (LV) dysfunction was investigated with diagnostic invasive coronary angiography. More recently, cardiac magnetic resonance imaging (MRI) tissue characterisation was proposed as an effective alternative test. We conducted a survey of UK cardiologists’ opinions on the use of CTCA in patients with stable chest pain and in the investigation of the aetiology of heart failure.

The study sought to evaluate the indications, image quality, safety and impact on patient management of cardiac magnetic resonance imaging (CMR) in a district general hospital setting.  The database was developed using retrospective analysis of patient records from the start of the local CMR service in January 2014 until January 2017. All 791 consecutive patients were included in the dataset.

The most important indications were the investigation of myocarditis/cardiomyopathies (54.5%), work-up of suspected coronary artery disease (CAD)/ischaemia (27.1%), and assessment of viability (9.1%). Image quality was diagnostic in 99.9% of cases. Mild adverse effects were reported for 3.8% of patients for stress CMR and in 1.1% of non-stress CMR. No serious adverse events were reported in this study population. In 26.5% of cases, CMR findings resulted in therapeutic modifications. In 18.1%, the final diagnosis based on CMR was different to that suspected before the CMR.

In conclusion, the findings of this study emphasise that CMR is a safe procedure with high image quality. In many cases, CMR can be shown to change a patient’s management plan.

Hypertension in pregnancy as the most influential risk factor for PPCM

Peri-partum cardiomyopathy (PPCM) is one of the leading causes of maternal mortality worldwide, but the exact cause of PPCM is still unknown. PPCM is often associated with many risk factors, especially hypertension in pregnancy. This study aimed to evaluate the most influential risk factors of PPCM in Javanese ethnic patients.

The study was a case-control study involving 96 PPCM patients and 96 healthy non-PPCM parturients (control group) in the Hasan Sadikin Central General Hospital, West Java, Indonesia in the period from 2011 to 2014. A multiple logistic regression analysis was performed to evaluate the most influential risk factors for PPCM.

The clinical presentation of patients with cardiac tamponade largely depends upon the length of time over which pericardial fluid accumulates and the clinical situation. It can result in a clinical picture ranging from cardiogenic shock to general malaise, including dyspnoea, chest discomfort or fullness, peripheral oedema and fatiguability.

Although cardiac tamponade is a clinical diagnosis, two-dimensional and Doppler echocardiography play major roles in the identification of pericardial effusion and in assessing its haemodynamic significance. Despite this, some other imaging techniques or diagnostic tools could also be used for diagnosis. With this case we want to highlight not only the role of the electrocardiogram (ECG), but also its utility in assessing the haemodynamic changes in this clinical entity.

This year’s 32nd HEART UK Annual Medical and Scientific Conference reflects the current challenges and innovations within the lipid community. Whilst bringing variety...

Consistently attracting over 11,000 delegates, EuroPCR remains one of the largest interventional meetings on the planet and this year’s packed programme did not...

‘High performing teams’ was the theme for this year’s British Cardiovascular Society (BCS) Annual Conference 2018, held in Manchester in June. It was...