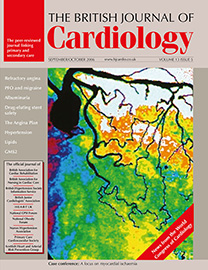 An unacceptable level of cardiovascular risk still remains prevalent in the UK – are we doing enough?

Statins represent the cornerstone of lipid-lowering therapy in patients with or at high risk of premature premature cardio vascular disease (CVD) but even among those that achieve guideline targets for low-density lipoprotein (LDL) cholesterol, there is still a 50–70% residual risk of cardiovascular events on statin monotherapy. In terms of absolute cardiovascular risk, nearly one in six statin-treated patients will experience an event over the next five years.

Cardiac disease has emerged as the leading cause of maternal death during pregnancy in the UK. Its incidence has been rising in the past two decades, largely due to increasing mortality from acquired heart disease, which currently exceeds mortality from congenital heart disease. According to the Confidential Enquiry, better care could have altered the course of 40% of the deaths from cardiac causes. Management of these patients is critical, because any maternal complication has major impacts on surviving children. Improvements in maternal cardiovascular medicine require concerted efforts through interdisciplinary collaboration of all specialties caring for pregnant cardiac patients. One important area for improvement is on how to identify and evaluate those at highest risks of pregnancy-related cardiac complications. Most assessments and clinical guidelines for the management of pregnant women with heart disease have been based on retrospective lesion-specific information. Direct evaluation of cardiac function during pregnancy may add further information, improving the cardiac care we can provide to individual pregnant cardiac patients. More research in this area is urgently needed. We also propose that improvement in training, research and exposure to the subspecialty of maternal cardiovascular medicine is needed to continue to raise standards of care for this patient population.

Smoking cessation substantially reduces the risk of cardiovascular disease in the prevention of primary and secondary cardiovascular events. Current first-line therapies include nicotine replacement therapy and bupropion, that approximately double a smoker’s chances of long-term success. Both therapies are safe in patients with cardiovascular disease. Novel treatments include rimonabant, nicotine vaccines and varenicline. To date, varenicline, an a4a2 nicotinic acetylcholine receptor partial agonist has been approved for smoking cessation and has been shown to be efficacious and well tolerated in clinical studies conducted in healthy smokers.

Clinical guidelines focus on statins for dyslipidaemia management for prevention of cardiovascular disease. It is clear, however, that there remains an unacceptably high residual risk of further events among patients who achieve target low-density lipoprotein (LDL) cholesterol levels. Low high-density lipoprotein (HDL) cholesterol levels, an independent predictive factor, is likely to be an important contributor to this excess risk, and is also common among dyslipidaemic patients. The ARBITER 2 study (ARterial Biology for the Investigation of the Treatment Effects of Reducing cholesterol) showed that raising HDL cholesterol with prolonged-release (PR) nicotinic acid in addition to lowering LDL cholesterol with a statin slows progression of atherosclerosis, and would therefore be expected to improve cardiovascular risk reduction in this setting. This economic analysis evaluated the cost-effectiveness of this strategy using computer simulation economic modelling incorporating two decision analytic sub-models. In the first sub-model, a cohort of 2,000 patients was generated using baseline characteristics and statin effect from the Heart Protection Study. Treatment effects observed with PR nicotinic acid (1,000 mg/day) in the ARBITER 2 study were then applied. The second model evaluated long-term clinical and economic outcomes using Framingham risk estimates. Direct medical costs were accounted from a National Health Service (NHS) perspective and discounted by 3.5%. In the UK setting, the addition of PR nicotinic acid to statin therapy resulted in long-term reduction in CHD events and increased life expectancy in patients who had achieved target LDL cholesterol levels but had persistently low HDL cholesterol, and this was achieved at a cost well within the threshold (< £30,000 per life years gained) considered good value for money in the UK. This strategy was highly cost-effective in patients with diabetes. Thus, adding PR nicotinic acid to statin therapy in these patients is both clinically and cost-effective and could be recommended for routine use in this setting in the UK.

Patients with Eisenmenger syndrome generally die prematurely from complications directly due to their pulmonary hypertension and cyanosis, or due to intercurrent events that are poorly tolerated because of the underlying inadequate cardiopulmonary reserve. To date, clinical management has aimed at avoiding situations that would destabilise their condition and treatment of its complications. However, therapeutic prospects are starting to look more encouraging. Results from a small study with the oral dual endothelin receptor antagonist, bosentan, have shown improved exercise capacity. Additionally, there appears to be a possible role for the phosphodiesterase-5-inhibitor, sildenafil, in the treatment of Eisenmenger pulmonary hypertension.

The European Resuscitation Council guidelines for the management of cardiac arrest have been updated. The following commentary discusses the major changes, the evidence on which they are based and the practical issues of their introduction.

This short report looks at the incidence of vitamin D deficiency, which is an important problem in patients who take amiodarone and also in those who avoid sunlight exposure.

An unusual presentation of malignant mesothelioma as constrictive pericarditis

This case report discusses a 54-year-old woman who presented to hospital with recurrent bilateral pleural effusions. She was eventually found to have constrictive pericarditis secondary to malignant mesothelioma. This disease presents a challenge to the physician with considerable difficulties in diagnosis, classification and treatment. This particular presentation of malignant mesothelioma is highlighted in the article.

The effectiveness and tolerability of lercanidipine is independent of body mass index or body fat percent. The LERZAMIG study

This study set out to assess whether the effectiveness and tolerability of lercanidipine for the treatment of essential hypertension in daily clinical practice is affected by body mass index (BMI) or body fat percent (BFP). A total of 2,793 out-patients (mean age 59.8 years) with mild-to-moderate hypertension participated in a multi-centre, prospective, open-label study. All patients received oral treatment over 12 weeks with lercanidipine 10 mg, which was titrated to 20 mg if blood pressure (BP) control was not attained. They were visited at baseline and at four, eight and 12 weeks. BFP was measured by the bioelectrical impedance analysis using an Omron BF-302 body fat monitor. Patients who were overweight or obese were also prescribed a hypocaloric diet. Results showed that, at baseline, sytolic BP was 159.4+/-11.7 mmHg, diastolic BP was 94.5+/-7.5 mmHg, BMI was 30.9+/-8.4 kg/m2, and BFP 27.7+/-6.3%. At 12 weeks, BP was lowered to 138+/-10.1 mmHg (systolic) and 81+/-7.2 mmHg (diastolic) (p<0001). BMI and BFP significantly decreased to 29.3+8 kg/m2 and 27.3+4.1% (p<0.05), respectively, which was most likely to be diet-related. Antihypertensive effectiveness was independent of baseline BMI and BFP values. There was a low incidence of adverse effects (5.5%), with headache (3.4%) and pedal oedema (1.5%) being the most frequent. Some 93% of patients completed the 12-week treatment period. The study showed that lercanidipine is an effective and well tolerated antihypertensive drug in daily clinical practice and its antihypertensive properties are not influenced by BMI and BFP.

News from the Scientific Sessions 2006 of the American Heart Association

We report the highlights from this year’s American Heart Association (AHA) meeting held in Chicago, Ohio, US, from November 11th-16th, 2006. These included studies...

An abundance of new information on the controversy surrounding drug-eluting stents was presented and discussed at the Transcatheter and Therapeutics (TCT) meeting held in...

We continue our series in which Consultant Interventionist Dr Michael Norell takes a sideways look at life in the cath lab...and beyond. In this...