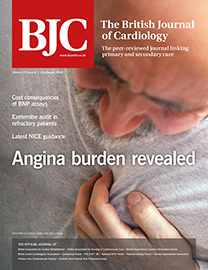 Amyloid heart disease is comparatively rare, frequently missed and often mimics other clinical conditions. It often carries a very poor prognosis. Nonetheless, healthcare professionals should be aware of ‘the amyloidoses’ and advances in their diagnosis and treatment.

Cost-effectiveness and use of natriuretic peptides in clinical practice – do we have enough evidence yet?

Clinicians find heart failure difficult to diagnose.1 Confirmation of left ventricular dysfunction (systolic or diastolic) is only possible by cardiac imaging. Recent European Society of Cardiology guidelines and National Institute for Health and Clinical Excellence (NICE) guidance have suggested that B-type natriuretic peptide (BNP)/N-terminal prohormone BNP (NT proBNP) and electrocardiography be used as a diagnostic tool that supports general practitioners (GPs) in their assessment of patients with suspected heart failure.2,3 Despite inclusion in guidelines2,3 uptake of BNP or NT proBNP use has been slow in the National Health Service (NHS).

Angina – more of a chronic problem than clinicians think

Managing patients with the various manifestations of coronary heart disease keeps cardiologists busy, whether in out-patients, the cardiac catheter lab or the coronary care unit. There is no doubt that the specialty of cardiology has benefited from drug regulation imposed and supervised by the Food and Drugs Administration and the Medicines and Healthcare Products Regulatory Agency – commercial sponsorship may have funded and, to some extent driven, the use of the ‘gold-standard’ double-blind, placebo-controlled, multi-centre clinical trial to test potentially useful drugs, but at least the evidence base for clinical practice is well-founded as a result. After hundreds of thousands of patient-years of phase III clinical trials and of post-marketing surveillance to establish what works and what doesn’t, the development of ‘patient care pathways’ and ‘best practice’ guidelines, clinicians may have thought they knew how to treat patients with angina. Nevertheless, patients are voicing their concerns over the impact of coronary heart disease on daily life and the inadequacy of their treatment, according to a survey conducted by Izzat and Knight and reported in this issue of the British Journal of Cardiology (pages 191–4). This patient survey is a reminder that clinicians’ expectations of delivering improved mortality and morbidity and relief of symptoms does not completely coincide with patients’ expectations of an improved quality of life and perfect symptom control. It is not clear if compliance was poor or whether the patient population was representative of the generality of patients, but the survey suggests that many were very dissatisfied with the treatment of angina. The most common complaints were the adverse impact of angina and associated drug treatment on the quality of daily life (especially sex life); symptoms occurring at least once per week, despite most having had surgical intervention; the adverse effect of medication, especially beta blockers causing symptoms of tiredness, lethargy, nightmares and impotence; and beta blockers prescribed despite concomitant chronic obstructive pulmonary disease.

New data gathered via a survey undertaken on behalf of the British Cardiac Patients Association (BCPA) confirm not only that angina itself has an adverse impact on lifestyle, but that the side effects associated with some of the currently prescribed therapies for angina may be exacerbating the situation for patients.

In primary care, the significant burden of heart failure is exacerbated by problematic, inaccurate diagnosis that may produce inefficient triaging of patients to echocardiography. UK guidelines recommend using natriuretic peptides in the diagnostic pathway. The costs and consequences of providing a definitive diagnosis for symptomatic heart failure have not been established for peptide testing in primary care. We provide a cost-consequence analysis to compare alternative diagnostic strategies for symptomatic heart failure patients presenting to their GP. Health economic evaluation using decision-tree modelling taking a cohort of patients presenting in primary care with symptomatic heart failure to a definitive diagnosis was performed. The model compared a diagnostic strategy using electrocardiograms (ECGs) interpreted by consultants with the use of B-type natriuretic peptide (BNP) assays. The base-case used data from the UK Natriuretic Peptide (UKNP) study, which used a ‘point-of-care’ assay. Two alternative scenarios were modelled reflecting data from key studies, as was sensitivity to costs. The model demonstrates that, for the base-case scenario, an initial diagnostic strategy of BNP is superior to ECG in terms of diagnosis of symptomatic heart failure in patients presenting in primary care, despite slightly more initial false negatives and a marginally higher cost. The alternative scenarios and sensitivity analyses show that the results are very sensitive to test accuracies and costs, but that, under plausible assumptions, BNP could be both cheaper and clinically superior. The model suggests that, despite parameter uncertainty, the adoption of BNP in primary care is likely to be clinically preferable, be more satisfactory for most patients, and lead to fewer unnecessary echocardiography referrals, at a very small increase in cost.

A clinical audit of ezetimibe in the treatment of refractory hyperlipidaemia was conducted in 100 high-risk patients who failed to achieve desirable levels of total and low-density lipoprotein (LDL)-cholesterol on statins. Of these, 59 had familial hypercholesterolaemia (FH), the remainder had other aetiologies (non-FH). The percentage of patients achieving the total and LDL-cholesterol targets of the International Panel on the Management of FH or the Second Joint British Societies’ guidelines in non-FH patients was determined. Ezetimibe significantly decreased mean LDL-cholesterol when used as an adjunct to statins or as monotherapy, from 3.9 to 3.1 mmol/L in FH, from 3.4 to 2.4 mmol/L in non-FH and from 6.0 to 4.4 mmol/L in statin-intolerant patients. The decrease in LDL-cholesterol on statins was inversely correlated with the decrement after adding ezetimibe (r= -0.67, p<0.0001) but 15% of patients showed no further decrease. The percentage of patients achieving target levels of LDL-cholesterol was 27% on statins and 63% on statins plus ezetimibe (p<0.007). None of the non-FH patients achieved target levels on statins but 33% did so when ezetimibe was added (p<0.001). Ezetimibe is an effective adjunct to statins for lowering LDL-cholesterol in refractory hyperlipidaemia, except in a minority of patients, and is a useful substitute in statin-intolerant subjects.

Nicotinic acid (for treatment of low high-density lipoprotein [HDL]) combined with a statin has been shown previously to improve cardiovascular outcomes. To evaluate tolerability and safety of prolonged-release nicotinic acid added to statin therapy in patients at high cardiovascular risk, the Niaspan®-induced HDL-Elevation for Optimizing Risk Control (NEMO) study focused on 179 patients with atherogenic dyslipidaemia treated under usual-care conditions. Flushing was the most common treatment-related adverse drug reaction (ADR) in Ireland (32% flushed during the first month), followed by cutaneous (6.2%) and gastrointestinal (3.9%) ADRs. Mean HDL-cholesterol increased by 20%. Half of the patients elected to continue treatment after the study. In conclusion, the tolerability and safety of prolonged-release nicotinic acid was similar in Ireland compared with the overall NEMO population. It is important to take practical measures to optimise patient compliance to minimise overall cardiovascular risk.

Syncope: role of CMR in evaluating the aetiology in a patient with dual pathology

We present a case in which the use of cardiovascular magnetic resonance (CMR) allowed the full pathology underlying syncope to be established.

General news from the world of...

The Primary Care Cardiovascular Society (PCCS) teamed up with the South East Wales Cardiac Network for the first joint regional meeting of the Society....