Sonographer- and nurse-led clinics were developed at a cardiothoracic centre and a sonographer-led clinic at a district general hospital (DGH). Common database fields were adopted in 2007 and this is an audit over the subsequent two years. Data were analysed for the two-year period from 1 September 2007 to 31 August 2009. A total of 683 visits by 388 patients occurred at the cardiothoracic centre and 1,306 visits by 726 patients at the DGH. There were no unexpected adverse events. Cross-referral to a cardiologist occurred in 13% of visits at the cardiac centre and 11.5% at the DGH. The mortality rates were 2% and 3%, the discharge rates 6% and 2%, and the surgical rates 16% and 4% at the cardiac centre and the DGH, respectively. No unexpected events occurred.

Our observations suggest that devolved surveillance clinics are feasible, safe and generalisable as part of a specialist valve service. 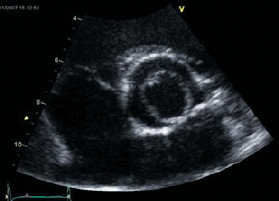 Valve disease, is increasingly common as our population ages.1 The organisation of care for these patients is patchy,2 while judging the suitability, timing and type of intervention has never been harder. Opinion papers, therefore, call for a cardiologist specialising in valve disease at every major hospital.3,4 However, patients with valve disease often remain asymptomatic for a long period and need regular echocardiography, but not necessarily to see a cardiologist. Such patients can be managed in a sonographer-led clinic, while patients with normally functioning mechanical replacement valves who do not require regular echocardiography can be managed in a nurse-led clinic. We developed specialist valve clinics with devolved surveillance independently at a cardiac centre at Guy’s and St Thomas’ Hospitals (GSTT) and at Eastbourne district general hospital (DGH). The inclusion criteria were: asymptomatic moderate and severe native valve disease; replacement heart valve; mitral valve repair; bacteriologically cured infective endocarditis; aortic dilatation. Patients were excluded for co-existing conditions requiring medical opinion. The clinic structure including protocols is described in detail elsewhere.5,6 Common echocardiographic thresholds derived from International guidelines7,8 and database fields were adopted in 2007, with the exception of patients with mechanical replacement heart valves who had annual echocardiograms at the DGH but not GSTT. This report describes an audit for the two years between 1 September 2007 and 31 August 2009.

Results of the two-year audit

There were 683 clinic visits by 388 patients at GSTT and 1,306 visits by 726 patients at the DGH. The median age of the patients was 65.5 (range 16–93) years at GSTT and 73 (range 20–91) years at the DGH. At the two clinics there were a total of 358 visits primarily to the cardiologist and 1,631 to the devolved clinics. However, the cardiologist needed to see 43 (13%) of the 325 patients initially seen by the nurse or sonographer at GSTT and 150 (11.5%) from the sonographer-led clinic in the DGH. The main reasons were a change in symptoms, a clinical event, or the attainment of an echocardiographic threshold. This, therefore, represents a net saving of 1,438 visits to a cardiologist. Discharge resulted from 42 (6%) visits at GSTT and 19 (2%) visits at the DGH. The main reasons were because the valve disease was only mild, or the patient preferred local follow-up, or was too frail to re-attend. Deaths occurred in seven patients (2%) at GSTT, all after aortic valve replacement or from nonvalve causes. There were 23 (3%) deaths at the DGH, three from progressive valve disease (two not suitable for transcatheter valve implantation [TAVI], and one referred for TAVI but died before this could be performed), two from heart failure (both with inoperable functional mitral regurgitation), and the rest from nonvalve causes. At GSTT, 61 patients (16%) had an intervention, 53 conventional surgery and eight TAVI. In the DGH, 28 (4%) had surgery of whom five were referred directly from the clinic without seeing a cardiologist. There were no adverse valve-related events in patients followed in sonographer- or nurse-led clinics. One patient from the sonographer-led clinic was admitted because of type II respiratory failure.

At the DGH, 90 patients with mechanical replacement valves had echocardiograms, 55 in the aortic, 34 in the mitral and one in both positions. In only one case was a postoperative echocardiogram available in the surgical discharge summary. There were 15 clinical events. In a further two aortic replacements, echocardiography showed a rise in gradient judged to be within normal limits after subsequent investigation. Therefore, the yield from routine follow-up echocardiography was zero in the absence of clinical indications.

The main advantage of a specialist clinic is to deliver higher quality care than in a general clinic as a result of greater volumes allied to specialisation of training, continuing education and clinical interest. Guidelines are more consistently applied9 and the number of inappropriate echocardiograms reduced.9 This audit confirms that routine echocardiography for normally functioning mechanical replacement valves is not necessary.7,8

Devolving surveillance to sonographer or nurse within the clinic structure frees the cardiologist to see those patients requiring clinical decisions, and our experience is that this is safe. The clinics are popular with patients who enjoy continuity of care, reduced waiting times, the ‘one-stop’ service, and flexibility of appointments. Sonographers or nurses seeing patients in the place of registrars saves costs and releases the registrar for training or other clinical duties. The clinics have also been useful for training nurses and medical students in auscultation, and registrars in the management of valve disease. Some of the roles are interchangeable so that our sonographer-led clinics could equally be run by a nurse undertaking the clinical evaluation with a sonographer purely for the echocardiography. We, therefore, expect that elements of these two models should be generalisable to any hospital. However, there are important provisos:

Valve disease is often managed in general clinics by cardiologists whose primary interest lies elsewhere. We suggest, instead, that there should be specialist multi-disciplinary valve clinics in a ‘hub-and-spoke’ arrangement.5 At the ‘hub’ is a cardiologist-supervised clinic in a cardiothoracic centre with ‘spokes’ represented by a devolved specialist surveillance clinic at a district hospital or, potentially, in the community. Devolving surveillance to a sonographer or nurse as part of a specialist valve service is feasible, safe and generalisable, and allows the cardiologist to spend more time making clinical decisions.

We thank Dr Ravi Rayasam and Ms Lesley Hart for their invaluable help in the preparation of this manuscript.

Routine follow-up for patients with prosthetic valves: the value of a nurse-led valve clinic