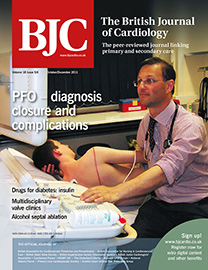 Alcohol septal ablation for the relief of symptoms in obstructive HCM: a ‘coming of age’

The diagnosis and management of hypertrophic cardiomyopathy (HCM) has undergone fundamental change since the condition was first described more than 50 years ago by Donald Teare,1 a forensic pathologist, and Michael Davis, an academic pathologist.

The purpose of this review is to give a broad overview of the role of patent foramen ovale (PFO) in disease. The embryological origins of PFO are described before reviewing the different diagnostic modalities available, including transthoracic echocardiography, trans-oesophageal echocardiography and transcranial ultrasound scanning. The role, or proposed role, of PFO in conditions including cryptogenic stroke, decompression sickness and migraine are discussed, as well as different treatment options, including the evidence for closure of PFO. Some of the range of methods and devices used to close PFO are described, as are the possible complications when attempting closure.

Insulin remains an important treatment for patients with type 1 and type 2 diabetes. Insulin is given to patients with type 1 diabetes as a form of hormone replacement therapy to replace the loss of endogenous insulin secretion. Intensive insulin treatment with either continuous subcutaneous insulin infusion or basal–bolus therapy reduces diabetic complications, including macrovascular complications. For patients with type 2 diabetes, insulin therapy is given to try and overcome the combination of insulin resistance and beta-cell dysfunction that are the pathological hallmarks of the disease. There are concerns that weight gain and hypoglycaemia, which are common side-effects of intensive insulin therapy, may reduce or negate direct benefits of controlling hyperglycaemia on macrovascular outcomes. The best insulin regimen for patients with type 2 diabetes is not clear, and treatment should aim to minimise weight gain and the occurrence of hypoglycaemia.

Sonographer- and nurse-led clinics were developed at a cardiothoracic centre and a sonographer-led clinic at a district general hospital (DGH). Common database fields were adopted in 2007 and this is an audit over the subsequent two years. Data were analysed for the two-year period from 1 September 2007 to 31 August 2009. A total of 683 visits by 388 patients occurred at the cardiothoracic centre and 1,306 visits by 726 patients at the DGH. There were no unexpected adverse events. Cross-referral to a cardiologist occurred in 13% of visits at the cardiac centre and 11.5% at the DGH. The mortality rates were 2% and 3%, the discharge rates 6% and 2%, and the surgical rates 16% and 4% at the cardiac centre and the DGH, respectively. No unexpected events occurred. Our observations suggest that devolved surveillance clinics are feasible, safe and generalisable as part of a specialist valve service.

Alcohol septal ablation (ASA) is an alternative therapeutic method to the gold-standard surgical myectomy in the treatment of symptomatic left ventricular outflow tract (LVOT) obstruction in patients with hypertrophic cardiomyopathy (HCM). ASA is performed by injecting alcohol into the target septal branch of the left anterior descending coronary artery. In this article, we review the rationale and indications for ASA, provide a practical description of the technique and give an overview of the published data placing it in context with the surgical approach. We also report our experience of the technique in a typical sample of patients referred to a tertiary centre providing demographic, echocardiographic and clinical outcomes data during an average follow-up period of three years. Our data confirm that ASA is an effective non-surgical technique for treatment of symptoms related to LVOT obstruction in HCM. Medium-term follow-up demonstrates persistent reduction in LVOT obstruction and improvement in New York Heart Association (NYHA) functional class. Long-term studies of larger populations are necessary to determine the wider prognostic significance of the procedure.

Platelet activation is an important part of the pathophysiology of acute coronary syndromes. Inhibition of this by antiplatelet agents forms an important part of the management of this condition. Recently, there has been considerable interest in the variability of platelet response to these drugs and the need to tailor the dose of antiplatelet agents according to the response.  Here, we present a patient who had repeated episodes of stent thrombosis and was found to have decreased response to clopidogrel and aspirin (clopidogrel and aspirin resistance) with the use of the Accumetrics VerifyNowTM analyser. We have also reviewed the literature on this subject. Our recommendation is that patients who have recurrent stent thrombosis or thrombotic events on dual antiplatelet agents should have their antiplatelet therapy response checked and have their antiplatelet agents tailored accordingly.

A 27-year-old Arab woman with history of seronegative rheumatoid arthritis for four years presented with a three-day history of multiple joint pains and swelling, along with fever. Clinically, she had bilateral rheumatoid hand deformities with signs of active arthritis of elbows, hands and knee joints. She was in sinus rhythm with normal cardiac examination. She was treated with steroids and was responding well except for mild fever, for which an echocardiogram was requested to rule out infective endocarditis.

Outcome in patients with peripartum cardiomyopathy (PPCM) is variable. Recovery of left ventricular function is observed in between 23% and 51% of cases at six months after diagnosis. Despite standard medical therapy, both morbidity and mortality remain high. Recent evidence has suggested that dopamine-receptor agonists may be beneficial in the treatment of this condition. We describe a case of a patient with PPCM who developed rapid normalisation of left ventricular function following addition of carbergoline, a long-acting dopamine-receptor agonist, to her conventional heart failure therapy.

The National Institute for Health and Clinical Excellence (NICE) has updated its guideline on hypertension, making a number of new recommendations regarding both the...

Dronedarone to be restricted

The European Medicines Agency has recommended that the anti-arrhythmic, dronedarone (Multaq®), should be...

News from the ESC Congress 2011

Highlights of the European Society of Cardiology (ESC) 2011 Congress, held in Paris, France, from 27th–31st August, included encouraging results with the third new...

Quality in CVD care – taking the lead in the new NHS

Correspondence from the world of cardiology....