We continue our series in which Consultant Interventionist Dr Michael Norell takes a sideways look at life in the cath lab…and beyond. In this column, he (or perhaps his trusty steed) consider the changing role of the medical secretary. 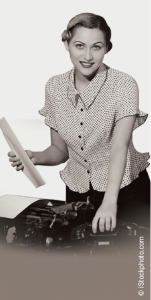 I should have thought about writing something like this years ago. Increasingly, I encounter a regular struggle to find a suitable topic upon which to muse that is readable, interesting, vaguely cardiological and – importantly – about which I have not written previously (as for the last on that list, I am relying somewhat upon my memory being better than yours). This topic was staring me in the face…

During my more than 20 years in consultant practice I have been privileged to work with a handful of medical secretaries. Previously, as a junior doctor, I recall my various bosses sitting in clinic and dictating letters directly to their secretary who, scribbling furiously, produced reams of shorthand in a spiral bound notepad.

The resulting bizarre hieroglyphics would later be translated into recognisable print (via a device termed a typewriter) that also generated one or more carbon copies. A process of checking, correction and signing would then precede enveloping, licking, franking and posting.

Dictaphones (a registered name, like Biro) saw the demise of such written skills, and technology ensured that these machines evolved from a Heath Robinson-type construction, derived seemingly from the era of Thomas Edison, to something you could more comfortably slip into your pocket.

At the same time, the constant drive towards efficiency meant that hospitals, like other organisations, were attracted to the concept of the typing pool. Whichever typist was up to date with their work, would then deal with your dictated correspondence. In one institution in which I worked this process was even more disconnected; in a secluded office and using one of a number of dedicated telephones, I dialled a specific extension number that allowed me to record onto the ether, as it were. A day or so later the printed results would appear in my cubbyhole for signing.

In registrar years my consultant would, on his ward rounds, dictate a short and succinct letter to each patient’s GP. This served a number of purposes: it documented him seeing the patient and making a contemporaneous note, it made the eventual production of the discharge summary much easier and it ensured that the GP was aware of what was happening to the patient.

I was sufficiently influenced by this approach to adopt and modify it when I took up my own consultant post. Rather than produce a ward round letter, I dictated only a paragraph summarising the course of the inpatient stay thus far and the proposed management plan. This would be typed and pasted into the notes, a system similar to that which our orthopaedic colleagues had been using for years. It proved extremely valuable as it was legible (useful) and, when scanning through a thick set of notes, I could rapidly find my own entry (probably less useful).

For years the combination of trusty tape recorder and accompanying mini-cassette served me well as a diary and memory prompt, and I can only recall two instances when this technology let me down…

My secretary had been off on maternity leave and for a few weeks my letters were typed by a less-than-able substitute. This resulted in constant checking and rechecking, correcting and re-correcting, such that our department ran out of Tipp-Ex and by the time any letter was actually sent out, the patient had got better.

Eventually my much-missed assistant returned. Basking in a sense of enormous relief shortly afterwards, and whilst dictating some outpatient letters, I muttered a brief preamble into the microphone along the lines of “For God’s sake don’t let what’s her name type this. I’m sure her typing consists of hitting keys at random!”

Somehow, and I suspect that higher beings on Mount Olympus played a part in this just to teach me a lesson, the tape found its way onto the desk of you know who…

The fallout was predictable; tears, counselling, hugs of support, more tears and quiet chats with managers, led to an apology along with some chocolates and a bunch of flowers. The anonymous lady in question never dealt with my letters again and I’m sure would have produced a letter tendering her resignation if she had actually been able to type the phrase.

In contrast to this sin of commission, the second episode was more one of omission. I tend not to write much (or indeed, anything) in outpatient notes, preferring to devote all my attention to observing and listening to the patient before assimilating my opinion into a letter that my primary care colleague would find helpful. From a medico-legal aspect I am assured that such a signed and dated contemporaneous communication is acceptable but it does rely on one small, but vital, link in the chain…specifically, not losing the tape.

Ten new patients, nothing written in the notes and no documented clue about what I thought or what I was planning to do. I managed to salvage the situation by producing somewhat more brief correspondence based on the referral letter, testimony from my outpatient nurse (provided under admittedly pressured interrogation), the various tests I had arranged as evidenced by completed request cards and to a minor extent, my memory. Never again…

Current digital technology has allowed any tape to be superfluous; my Dictaphone requires only to be docked with my office PC and voice files appear instantly on my secretary’s screen – or another’s in her absence. And way beyond one’s own office, some hospitals outsource such files to far off lands where typists will convert your words to typed text, then to be returned electronically for printing and signing.

Much of my day-to-day, non-clinical correspondence I deal with electronically which must release my secretary a fair bit. Otherwise, I am blessed with someone whose clinical letters do not require checking or signing so, as with other colleagues, my correspondence is finished with the line “dictated but unsigned to avoid delay” or a similar choice of words that smacks of efficiency as well as tacitly complimenting my loyal assistant.

The logical extension of these various developments will be the use of voice recognition software in conjunction with a paperless environment. Any dictated letters, summaries or reports will be converted to text and then sent electronically to primary care, hospital colleagues or to filing.

My own small contribution to this revolution is the social use of a Dragon app on my iPhone with which I can dictate particularly long texts or emails. It does, however, require a quiet environment and clear pronunciation otherwise some of the words or phrases displayed in response to the sounds it hears are truly astonishing – if not potentially illegal.

So where does this leave our loyal secretaries? What will be her (or his) function in the future? The role of many is much more that of a PA but I forget; such a title is reserved of course for the assistants of “senior managers” rather than just consultants.

In their absence who will be our public face; dealing with patients’ queries and concerns over the phone, making excuses as to why you can’t get to a meeting because you are embroiled in an emergency (allegedly) or telling an irritating and persistent caller that she “will check if I’m in my office” while she can plainly see me gesticulating wildly in front of her that I’m not available?

Who will check train or flight times, rearrange clinics or make last minute adjustments to next week’s PCI list, because I forgot to tell her about a meeting I want to attend, a talk I am scheduled to give or even some well earned (sic) annual leave?

They are worth their weight in gold so show interest and support them, ask about their family and remember their birthday or wedding anniversary. You will not regret it and as a reward she might not only type your Oblique View column for the BJC but also, as in this case, actually write it for you!