We continue our series in which Consultant Interventionist Dr Michael Norell takes a sideways look at life in the cath lab…and beyond. In this column, he considers how we manage the often dreaded outpatients’ clinics. 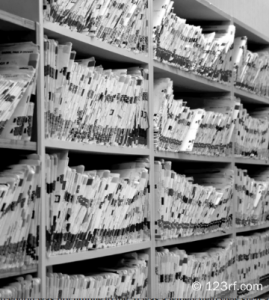 Ever since my early years as a newly qualified doctor, time spent in the outpatient department was always regarded as a chore. This perception was not unique to me. It was a widely held view such as to spawn a renowned mnemonic analogous to the well-established assessment of the collapsed patient; instead of Airway, Breathing, Circulation, ABC became Anything But Clinic.

Senior House Officer (SHO) and Registrar posts were memorable for the hours spent with extraordinarily bulky sets of case notes – often in multiple volumes – belonging to patients who had been reviewed on an annual basis since their first new patient appointment with William Harvey. Some clinics would famously go on all day.

It was traditional. Patients were never “let go”– particularly by inexperienced and less confident junior staff – and were presumably reassured to know that they remained “under the hospital” for their atypical chest pain, palpitation and more recently the epidemic of moderate mitral regurgitation resulting from the ubiquitous use of echocardiography (I have a problem with the term moderate, given that it spans such a huge spectrum of significance, from just more than trivial to bordering upon the catastrophic).

Whilst the majority of our day-to-day catheter lab work comes to us as unplanned activity, we should not diminish the value of our contribution into those patients referred along more sedate pathways. Even though the yield of significant cardiac pathology from our outpatient presence is far less, we should not underestimate our role in reassuring the well that they do not have heart disease.

However, the question has always been how to manage the process. A proportion of cases will require review, either in the light of further investigations or to assess the response to any treatment advised or undertaken. Then there are those whose condition requires monitoring so that any future intervention can be timed correctly. Such a strategy assumes that the pathology may advance ahead of symptomatic deterioration that might otherwise prompt re-referral; aortic stenosis and the indication for valve replacement is a classic example.

If we follow an algorithm as described above, it is predictable that the volume of patients to be seen must grow. Admittedly the natural history of heart disease is that there will be attrition at one end of the process, but this is exceeded by new referrals presenting at the other and further compounded by an expanding range of tests and treatments on offer, as well as the ever increasing age of the population.

This need will be further enhanced by the quite reasonable requirement to consent prior to any procedure. In order to demonstrate that our patients have had sufficient time to digest our advice, plus understand the risks and benefits of angioplasty (for instance) as well as the impact of any alternative measures, there needs to be a demonstrable time gap between our recommendation and the date of the procedure itself. The outpatient clinic is an ideal forum for such a discussion but it is not without practical consequences.

Added to this demand for our attentions are those clinics that have a built-in time by which patients should be seen. A rapid access angina clinic, in which there is a two-week target, is a perfect example. Seen universally as a major advance in the management of coronary disease, it replaced either ludicrously lengthy routine outpatient waits for patients with recent onset – and therefore, unstable – symptoms, or GP requests for a hospital-based ECG reporting service, which was presumably supposed to reassure these patients because (wait for it) their resting ECG was normal.

On that particular note I, like many other junior doctors in the late seventies and eighties, spent many hours reporting these tracings. In addition to scribbling “left anterior hemiblock”, “LVH and strain pattern” or “low amplitude T waves; significance?”, we would routinely utilise a dedicated ink-stamp that read, “A normal ECG does not exclude significant coronary disease”.  At long last, I think (I hope) that message has got through.

So how do we construct this aspect of our service so that it does not become unwieldy and inefficient? Addressing referrals to “Dear Colleague” evolved years ago and was seen as a good thing, given that it balances out those discrepancies in waiting times existing between individual consultants.

One common approach is to arrange any necessary tests prior to a patient being seen so that the results are available when the new appointment arrives and matters can be largely concluded at that juncture.

This is a neat system with the eventual consultation becoming “one stop”, but the patient still has to attend on another (albeit previous) occasion for tests. Unfortunately, the referral letter may not always suggest which test or tests are likely to be needed – if any, and it also requires the waiting time for investigations to be less than that for an outpatient appointment so that results can be processed in time.

Could outpatient visits be avoided by only advice or guidance being requested and provided either by phone or by email? That might work if any advice was only to be general and not specific to an individual patient, but in that case the answer might be equally well found online or in a textbook!

As for patient specific assistance, I have concerns. It relies on the specialist being given all necessary information upon which his view can then be based. It still needs formal recording and documentation as with any other medical interaction, and would still require the dedicated time of a specialist when he could be doing other things (like a clinic). Also, you should be aware of the medico-legal maxim: there is no such thing as informal advice.

How best should we deploy our staff so as to utilise them effectively in the outpatient arena?

Nurse practitioners are certainly an underused resource and have much to offer in dedicated clinics such as those for pre-admission, rapid access angina, arrhythmia, etc. Otherwise it is largely down to consultants and middle grades; but who sees which patients?

Traditionally the chief sees the “news” and the registrar the follow-ups, but there will often be reasons to reverse this arrangement. If indeed patients are being reviewed in order to time any intervention, then a more experienced and senior mind might be better equipped to focus on that decision.

Seeing new patients is a valuable educational opportunity for trainees particularly when the case is discussed with a senior in order to agree a management plan. Either way, the crucial point is that a further follow-up appointment is seen as a valuable resource and offered only with good reason. Once a patient is put into a follow-up system, the chances are that they will be seen every six to 12 months by a trainee or fellow, and never discharged.

Do all patients need to be examined? Even if a recent echo result is available, patients still expect the laying on of hands if they are under a cardiologist’s care. It undoubtedly hones auscultatory skills (even though such expertise is fast dying-out), but any such examination must have a purpose (e.g. how severe is this aortic stenosis?) and not simply be undertaken as a ritual.

Finally there is the old chestnut about how many outpatients can reasonably be seen in a session? This needs to be understood so that demand and capacity can be balanced. The Royal College of Physicians have suggested that 30 minutes be allocated for new patients and 15 for reviews. In order to model a service, I reckon that any practitioner could reasonably see 10 cases per session, this being a mix of new patients and reviews.

I’m signing off now as my next patient is coming in.