The 10th Heart Rhythm Congress was held October 4th–7th 2015 at the International Conference Centre (ICC) in Birmingham. This year’s event hosted a wide range of topics including electrophysiology, device management, syncope, inheritable arrhythmias and the basic sciences. Dr Kim Rajappan (Oxford University Hospitals) took on the role of Programme Director for the first time this year. The meeting was a resounding success according to Drs Afzal Sohaib and Kevin Leong, who report on its highlights. This report is carried in full online.

Plenary session – precision medicine for the next decade 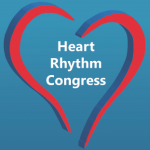 A distinguished line-up of speakers enlightened the congress on the future of rhythm management in this session. Dr Calum MacCrae (Brigham and Women’s Hospital, Boston, USA) opened our eyes to the ongoing challenges and potential of genetic testing to tailor the treatment of cardiovascular disease.

From genetics and genomics we moved on to proteomics, where Professor Manual Mayr (King’s College London) enlightened us on how this emerging and rapidly growing discipline can shape the future of rhythm management. Professor A John Camm (President, Arrhythmia Alliance) brought the concept of precision medicine back to a very real and everyday clinical scenario we face with the use of non-vitamin K oral anticoagulants (NOACs) for stroke prevention in atrial fibrillation (AF), and the myriad different features which the different agents offer us to optimise and tailor our choice of agent to individual patients, with their individual preference and individual clinical scenario.

Management of syncope and POTS

An overview of the recently published 2015 Heart Rhythm Society consensus statement on the management of postural orthostatic tachycardia (POTS), vasovagal syncope and inappropriate sinus tachycardia was given by Professor Richard Sutton (Monte Carlo, Monaco) and Dr Satish Raj (University Of Calgary, Canada). All three conditions and a summary of guidance and recommendation as to their management was given. It differs from current European Society of Cardiology (ESC) guidelines in the definition of syncope, but incorporates some new advice on pacing and tilt-testing from European work. Professor Sutton also added the ESC has started to revise its Guidelines in Syncope due in 2017. Changes will include an online compendium of ‘how to perform’ and ‘how to interpret’ relevant tests.

The European Heart Rhythm Association consensus document on syncope units was presented by Professor Rose Anne Kenny (Trinity College Dublin, Ireland). She presented data showing the wide variation in practice of syncope evaluation and in adoption of recommendations from published guidelines from personal and other published works highlighting the rationale and requirement for the development of services.

She added that a syncope service should have a multi-disciplinary approach drawing from the specialties of cardiology, neurology, geriatrics and psychiatry. A robust discussion ensued on the barriers to setting up such a service with anecdotal solutions and suggestions coming from the speaker, chair and members of the floor.

This session opened with an erudite overview of the development of ventricular arrhythmia management over the last 30 years by Professor Camm. Subsequent speakers expanded on each of these developments starting with pharmacotherapy by Dr Lluis Mont (Hospital Clinic of Barcelona).

Professor Richard Schilling (London Bridge Hospital) provided an insightful talk on the evolving role of catheter ablation, touching on some newer technologies such as force sensing and newer mapping techniques to improve outcomes. Other topics included the strategies in managing ventricular ectopy and use of cardiac magnetic resonance imaging (MRI) in determining the substrate to guide and improve ablation.

Highlights from the scientific sessions and posters

The scientific sessions saw contributions of cutting edge research from several tertiary institutes across the UK that focussed on elucidating the mechanisms of arrhythmias. Although rotors have been shown to drive AF and targeting these sites has become an emergent ablation strategy, factors that influence rotor location and stability remain unclear.

Dr Fu Siong Ng (Imperial College London) addressed this, employing optical mapping experiments on canine atrial tissue to show anatomical locations such as the pulmonary veins, and functional factors such as spatial heterogeneities in conduction and repolarisation, were more important determinants of rotor sites than regions of fibrosis. These mechanistic insights could optimise ablation therapy by identification of such factors in vivo with emerging imaging modalities.

He then demonstrated using mRNA studies from biopsied tissue, that such areas of myocardial tissue susceptible to APDA have greater expression of specific ion channel repolarisation currents and calcium handling molecules, providing molecular insights into this pro-arrhythmogenic phenomenon.

In other presented work, other institutes showcased the potential use of novel electrocardiogram- (ECG) based biomarkers (University of Leicester) and non-invasive electrocardiographic imaging technology (National Heart and Lung InstituteNHLI) to risk stratify risk and gain arrhythmogenic insights into repolarisation disorders (e.g. Brugada Syndrome). The conference also hosted a series of useful primer sessions for those wishing to gain a greater understanding of research in the basic sciences. Thoughtful and jargon-free lectures were delivered on the basics of genetics, the applications of computer modelling and simulation, along with enlightening lectures on the use of various stem cell technologies and animal models (e.g. zebra fish) as research and clinical tools.

The ICC hosted the 10th Anniversary Awards.  Professors John  Camm (, President of Arrhythmia Alliance), and Professor Nick Linker (, President of the British Heart Rhythm Society) (BRHRS) presided over the ceremony, where .  Trudie Lobban MBE spoke of her pride in at seeing this meeting grow in the last decade from a potential group of around 150 participants to the huge meeting we see today.

Prizes were awarded to Dr Joseph de Giovanni of, Birmingham Children’s Hospital (Individual who has Contributed to Arrhythmia Services), the Westcliffe Community Cardiology Service (Team of the Year), and to Lloyds Bank Berkshire Lloyd Berkshire (Charles Lobban Volunteer of the Year).  Professor Blair Grubb, (University of Toledo Medical Center, Ohio, USA), received the award of for Medical Professional of the Decade for his work on syncope and dysautonomiadysautonomia.

Six cardiology registrars showcased their research to the Congress and received a grilling from Professor’s Andre Ng, Andrew Rankin, Pier Lambiase, and Dr Francisco Leyva-Leon.  The competition was divided into two categories: electrophysiology and device therapy.  The electrophysiology category was won by Dr Norman Qureshi (Imperial College London) for his abstract entitled ‘”Characterisation of the persistent AF substrate through the assessment of electrophysiologic parameters in the organised versus disorganised rhythm,’” where he explained how during his research he tried to dissect the structural and functional components underlying the mechanisms of atrial fibrillation.

Runners up in this category were Dr Gavin Chu (University of Leicester) for his work on targeting the cyclical highest dominant frequency in the ablation of persistent AF, and Dr Henry Chubb (King’s College London) for his work looking at real time MRI- guided ablation of arrhythmias, moving on pre-clinical work by the group to clinical application.

The device category was won by Dr James Gamble (University of Oxford) for his abstract entitled ‘”Differential relationship of electrical delay with endocardial and epicardial left ventricular leads for cardiac resynchronisation therapy.’”  Dr Gamble used data from the Oxford groups work on trans-ventricular septal approach to biventricular pacing to demonstrate improved electrical characteristics when the left ventricle is paced via the endocardium rather than epicardium.

Runners up in this category were Dr Afzal Sohaib (Imperial College London) who presented data on the role of improved atrioventricular (AV) timing and its contribution to the benefits in biventricular pacing, and how AV optimised direct His bundle pacing may open a new frontier in the treatment of heart failure, and finally Dr Robin Taylor (University of Birmingham) presented data  on the use of feature tracking and contrast enhanced MR to understand the importance of lead position in relation to the presence of scar for identifying the areas of latest mechanical activation.

Concerns for the future

An ongoing concern throughout the meeting both during the sessions and in break- out areas were concerns related to new tariffs for electrophysiology and device therapy in the National Health Service (NHS), and the potential for this to destabilise heart rhythm services in the UK.  The meeting formed an effective forum for different stakeholders to come together to try find solutions to prevent patients from losing out on life saving and life changing therapy offered by heart rhythm specialists.  Let us hope this will not be a feature for 2016 and we can focus on all the other excellent work instead!