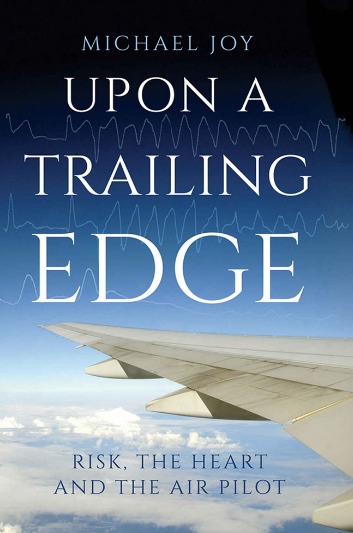 The author describes this as a story about aviation, its risks and the heart of the pilot. It is a story told extremely well from a unique personal perspective and should have wide appeal. It is principally an autobiography charting the author’s life in aviation and cardiology, and the interface between them that deals with the impact of cardiovascular disease on a pilot’s fitness to fly. It also includes a brief history of powered flight, insights into human factors and the quantification and containment of risk, as well as some entertaining travel writing, as the author recounts numerous trips abroad in the course of his work.

Early chapters describe his post-war childhood and school days, including early flying experience in the Cadet Corps and a flying scholarship with the RAF section, leading to the award of the author’s flying licence in a Tiger Moth. After qualifying in medicine, he resumed his flying activities alongside a career in cardiology, owning and flying several light aircraft, achieving nearly 1,000 hours as pilot in command, along with night, instrument and twin-engine ratings.

This experience equipped him well to become the first cardiologist appointed to the UK Civil Aviation Authority (CAA) soon after the fatal 1972 crash of BEA Trident G-ARPI (Papa India) shortly after take-off from Heathrow. The accident was caused by the pilot suffering incapacitation due to myocardial infarction, compounded by numerous operational and human factors. It prompted a greater emphasis on Crew Resource Management (now increasingly adopted in healthcare), as well as the introduction of training in the recognition and management of pilot incapacitation, which has greatly reduced the risk of an accident arising from medical causes in multi-crew operations.

The accident inquiry also recommended the centralised scrutiny of aircrew electrocardiograms (ECGs), which was the author’s initial role at the CAA but this was soon extended to the cardiological assessment of aircrew and membership of the Medical Advisory Panel, set up to provide specialist advice to the Chief Medical Officer. As consultant to the CAA for 38 years, the author strove to put the cardiovascular assessment of aircrew on an evidence-based scientific footing. This included the organisation of two UK and two European Workshops in Aviation Cardiology between 1982 and 1998 and the drafting of European and International standards for cardiovascular fitness to fly.

Later chapters describe the author’s extensive experience as a private pilot traversing Europe (often to attend professional meetings, including those of the European Society of Cardiology) in a variety of aeroplanes and weather conditions. The understanding of the operational environment afforded by such adventures clearly facilitated the informed assessment of aircrew with cardiological problems in a regulatory context, as well as commanding the respect of those being assessed.

In closing, the author offers some specific suggestions on operational issues to further improve aviation safety and counsels strongly against the proposed outsourcing of medical services by the regulator – if his forthright views in that regard generate some wake turbulence, that may be no bad thing. To quote the author, “safety is a fragile flower”. He has done much to cultivate it, and his insights should command the attention of those charged with its preservation and enhancement.

The book is engaging and discursive in style but there is sufficient technical detail on medical, aeronautical and regulatory issues. There are historical insights, innumerable illustrative examples of aviation accidents and the lessons to be learned from them, evocative descriptions of some remarkable people and an abundance of entertaining anecdotes. This is a book for the curious and it does not disappoint.