This review focuses on the role of CytoSorb® (CytoSorbents Corporation, Monmouth Junction, New Jersey, USA), a technology for purifying extracorporeal blood. The technology is designed for several indications to prevent bleeding complications during on-pump cardiac surgery, including removal of the antiplatelet agent, ticagrelor, and the oral anticoagulant, rivaroxaban, from the blood. Recent clinical studies are briefly reviewed.

Bleeding post cardiac surgery carries significant patient mortality and morbidity including resternotomy, increased hospital stays, and blood product transfusion.1,2 Bleeding is more severe in patients who are taking pre-operative antiplatelet or anticoagulation medications that have not been stopped sufficiently in advance to minimise such risks. Current guidelines across Europe recommend stopping such agents at least two to five days prior to surgery; they also recommend delaying urgent surgery so that the risk of perioperative bleeding is minimised.3 However, this is not always possible in the setting of urgent and emergency cases, as the risk of adversity delaying surgery outweighs the risk of bleeding.

Some agents, such as warfarin, can be reversed using vitamin K, or bleeding risk can be minimised e.g. with dabigatran, a direct thrombin inhibitor, by using an antidote (reversal agent) idarucizumab.3 For other direct oral anticoagulants (DOACs), namely factor Xa inhibitors rivaroxaban and apixaban, andexanet alfa is an approved antidote when reversal of anticoagulation is needed due to life-threatening or uncontrolled bleeding4, but not to prevent it. In the majority of cases, blood products including fresh frozen plasma, cryoprecipitate and platelets, are used to minimise the effect of such agents on bleeding during the perioperative period. It is imperative to understand that not only patients on anticoagulation or antiplatelet medications have a higher risk of bleeding – in infective endocarditis, for example, patients are at high risk due to the systemic coagulopathy associated with sepsis.

Despite using the above measures, bleeding remains a critical issue in emergency cases and high-risk patients, and very often contributes to the higher rate of perioperative complications and poorer outcomes in these patients.5 It is not only bleeding that can significantly impact the outcomes but the accompanying inflammatory and cytokine response can fulminate the coagulopathic process further affecting outcomes during and post cardiac surgery. 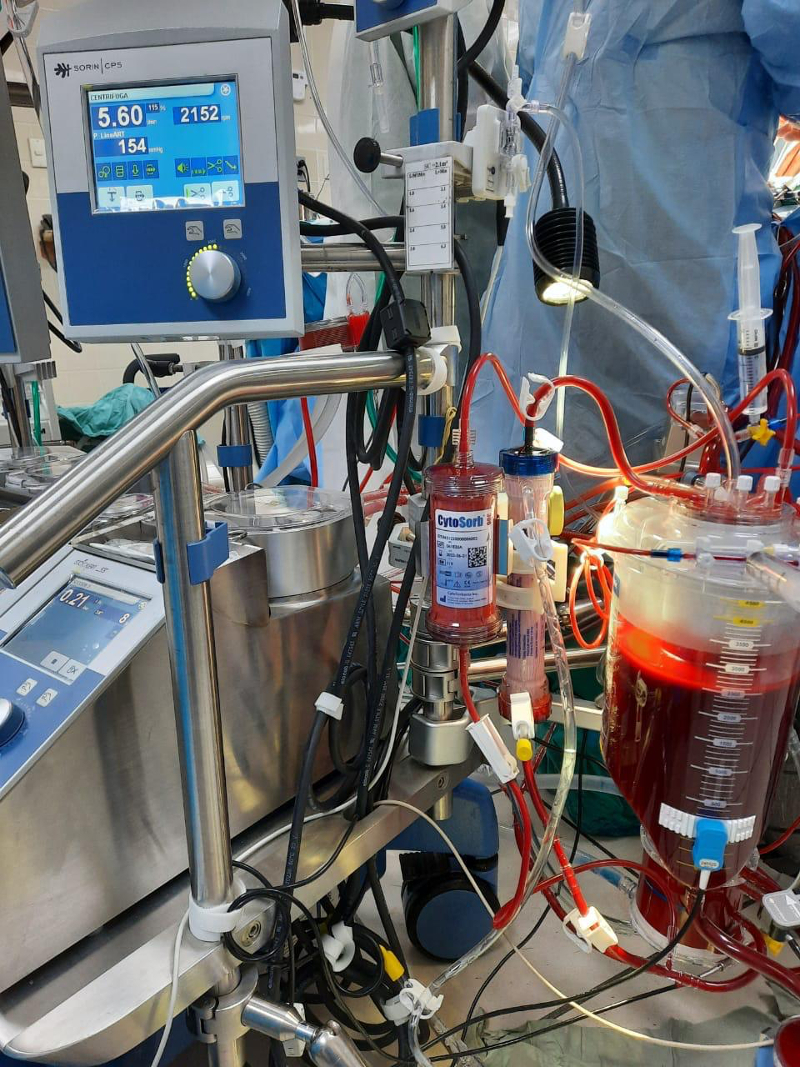 The CytoSorb® system is used in patients who require urgent or emergency cardiac surgery, including for acute cardiovascular events, acute deterioration, or a failed percutaneous coronary intervention. CytoSorb® consists of a 300 ml cartridge containing small absorbent polymer beads that permit the removal of hydrophobic substances. The sorbent cartridge can be stored for up to 36 months. The CytoSorb® CE label now also includes intraoperative removal of ticagrelor and rivaroxaban during cardiopulmonary bypass surgery. The technology is used by cardiothoracic surgeons, cardiac anaesthetists, perfusionists, and specialised nurses. It is used in tertiary care during cardiac surgery.

The manufacturer states that CytoSorb® can be integrated into the extracorporeal circuit (see right) by a perfusionist or specialised nurse and only minimal training is needed.

Haemoadsorption with CytoSorb® – the rationale

A key factor driving the coagulopathic status is the development of a cytokine storm during the perioperative period. This is due to the release of different inflammatory mediators during the cardiopulmonary bypass (CPB) process, such as interleukin (IL) 6, 8, 10, and tumour necrosis factor (TNF)-α among others, or as a part of the clinical picture of sepsis in the perioperative period. Systemic inflammation results in activation of coagulation, due to tissue factor-mediated thrombin generation, downregulation of physiological anticoagulant mechanisms, and inhibition of fibrinolysis.6

Haemoadsorption is a technique in which selective molecules can be removed during CPB or extracorporeal membrane oxygenation (ECMO).7 Through this technique, CytoSorb® eliminates the key contributors to the cytokine storm (IL-6, IL-8, IL-10; TNF-α, damage associated molecular patterns [DAMPs] such as C3a, C5a, S100; and pathogen associated molecular patterns [PAMPs] such as certain Gram-positive bacteria toxins), together with myoglobin and some metabolites (such as  bilirubin, ammonia and bile acids). Furthermore, CytoSorb® adsorbs several drugs such as ticagrelor and rivaroxaban while preserving the coagulation factors and proteins.8

CytoSorb® is a recently launched product in which blood purification is utilised through the extracorporeal system with a very large surface area of around 45,000 m2 when compared to the filtration techniques in haemodialysis. The use of this asset is reported to help in eliminating the inflammatory mediators and antithrombotics to minimise the risk of perioperative complications including bleeding in patients using DOAC or antiplatelet agents.9 This plays a crucial role during emergency surgery in anticoagulated patients and in patients with infective endocarditis, who are at the highest risk of developing bleeding due to destructive maladaptive systemic inflammatory response (SIRS).10,11 The application of CytoSorb® is not limited to CPB, as it can be used during ECMO, dialysis or even haemoperfusion as part of an extracorporeal circulation circuit. Further future opportunities for using CytoSorb® include high-risk cardiac surgery patients, mechanical circulatory support devices related cases, and heart transplant cohorts.

CytoSorb® has been utilised in different critically ill patients including those with sepsis.12 In 2017, an in vitro study by Angheloiu et al. reported the successful use of haemoadsorption for the removal of ticagrelor, a P2Y12 receptor antagonist antiplatelet agent, and recommended its use during a clinical scenario involving a patient loaded with ticagrelor, undergoing cardiac catheterisation and then referred immediately to open heart surgery.8 In 2020, a study by Bjørnstad et al. emphasised that oral anticoagulation use is associated with increased mortality rates in patients with acute aortic diseases requiring emergency intervention.13 Following this, several – although limited – studies have reported outcomes utilising CytoSorb® in patients needing urgent or emergency cardiac surgery. Bradic et al.14 reported results in 35 patients between 2016–2019: in 63% of the patients CytoSorb®-use was associated with shorter operative times, lower postoperative drain outputs, lower blood transfusions, lower resternotomy rates and shorter intensive care unit stay. Similar outcomes were supported by an earlier and larger German study, which enrolled 55 patients that needed emergency cardiac surgery.15

Economically, the use of CytoSorb® is claimed to save costs when utilised in the correct cohort of patients. It is reported to save GBP 3,941 per patient who had ticagrelor or the DOAC, rivaroxaban, before emergency cardiac surgery.16 Several ongoing studies evaluating both drug removal and drug reversal strategies will contribute important new information on the ability to reduce the bleeding risk in patients on ticagrelor undergoing surgery (table 1). Nevertheless, a recent propensity score matched retrospective study in septic patients by Brouwer et al. showed that a combination of CytoSorb® with continuous renal replacement therapy (CRRT) resulted in a lower mortality rate than using CRRT alone (p=0.038) in septic shock patients with severe acute kidney injury.

The outcomes from the above-published literature have prompted the National Institute for Health and Care Excellence (NICE) to develop a medtech innovation briefing (MIB) to consider CytoSorb® as the first device to be demonstrated as safe and effective in removing ticagrelor from the circulation. According to the NICE MIB,17 CytoSorb® provides significant advantages in reducing the risk of bleeding in emergency cardiac surgery in patients treated with ticagrelor and lowers the utility of bleeding resources. CytoSorb® can, therefore, also reduce inhospital stay for urgent cases awaiting cardiac surgery.

While evidence is currently limited, there appears to be a trend that the novel approach of CytoSorb® haemoadsorption can be an effective tool to minimise bleeding risk in emergency cardiac surgery of patients treated with ticagrelor or rivaroxaban, and that CytoSorb® can contribute to shorter inhospital stays among urgent preoperative cases with a significant associated cost saving. Evidence however, is limited to case series and observational studies. Results from larger sample size and randomised trials are therefore keenly awaited in building a recommendation for regular use of CytoSorb® in on-pump cardiac surgery.

The webinar ‘CytoSorb® adsorption for reducing risk of bleeding during cardiac surgery in ticagrelor/rivaroxaban treated patients’ on which this review is based can be accessed at: www.cyto.news/webinar-tica-riva

Conflicts of interest and funding

The BJC commissioned AH and AB who received an honorarium for writing this review. The review was sponsored by CytoSorbents Europe (see sponsorship statement).

Cytokine removal in sepsis and endocarditis