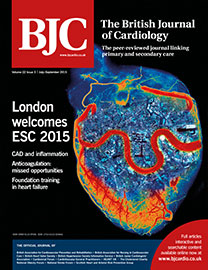 When the National Institute for Health and Care Excellence (NICE) clinical guideline 180 on atrial fibrillation (AF) was published in June 2014, out if its many recommendations, two points seemed paramount. First, it is the patient, and not the clinician, who should make the decision as regards the nature of the treatment they are to receive, whether this be for stroke prevention or for symptom management, and that all those with AF should be offered stroke preventive therapy, with the exception of those without risk factors (CHA2DS2-VASc 0 or 1 in females).

Inflammation is associated with myocardial ischaemia

Inflammation plays an important role in the pathogenesis of coronary heart disease (CHD). Several inflammatory cytokines have shown a direct association with the development of atherosclerosis. Recently, there have been a number of experimental studies exploring the potential anti-inflammatory role of currently used therapeutic agents including antibiotics, immuno-suppressive drugs and non-steroidal anti-inflammatory medications. This review summarises the available evidence base and the potential role of these agents in current clinical practice.

Oral anticoagulation in hospitalised patients with newly diagnosed AF: a story of too little, too late

Current guidelines make no recommendations regarding the strategy for initiation of oral anticoagulant (OAC) therapy in patients who are hospitalised with newly diagnosed atrial fibrillation (AF). This was a single-centre, retrospective, observational study that included patients admitted in 2013 with newly diagnosed AF (ICD-10 I48). There were 234 patients hospitalised with newly documented AF. The mean CHA2DS2-VASc score was 3.8: 201 (86%) patients had a CHA2DS2-VASc score ≥2. Out of the 179 patients considered for anticoagulation, only 115 patients were intended to receive OAC therapy: 56 (49%) as an inpatient and 59 (51%) as an outpatient, either by anticoagulation clinic or primary care. In the outpatient group, only 41 patients (69%) were actually initiated on OAC, with a mean time delay of 10 and 93 days in anticoagulation clinic and primary care group, respectively. During mean follow-up of 194 days, there were two strokes in the outpatient group in patients intended to start anticoagulation but did not (2/59), while no episodes occurred in the inpatient group.

In summary, only 82% of patients with newly diagnosed AF and CHA2DS2-VASc score ≥2 were referred for initiation of OAC, and still fewer actually received such therapy. Outpatient anticoagulation is associated with poor uptake and significant delays.

Transradial access for coronary procedures is associated with less vascular access site complications. Occasionally, radial access fails and makes conversion to a transfemoral route inevitable. In this paper, which updates UK radial experience, we report the outcomes in a single UK centre in developing a transradial access programme.

In conclusion, after an initial learning curve, procedural success rate is high with low cross-over rate from radial to femoral entry site.

With the expansion of the heart failure services to meet the rise in demand, we established, in Sheffield, a new training post for the junior medical staff in their first year of training. This is a four-month post for the Foundation Year one (FY1) doctors in heart failure. The post differs from the classic FY1 posts in that it is based in the heart failure multi-disciplinary team (HF-MDT) rather than being ward-based. Thus, the trainee works under the supervision of a consultant cardiologist with an interest in heart failure, and works alongside a group of heart failure specialist nurses screening new admissions for heart failure, and offering advice and follow-up of patients with heart failure who are not under the care of the cardiologists. The trainee attends the heart failure diagnostic clinic along with the consultant cardiologist, and participates in the work of the HF-MDT ward round. These are the collective personal views of the first three trainees who have worked in this post in the year 2013–2014; with a footnote from their supervisor.

This case report invites discussion on the challenges of the management of extensive thromboembolism despite standard anticoagulation.

A previously healthy 49-year-old male had an acute pulmonary embolism (PE) and was managed with rivaroxaban anticoagulation and an inferior vena cava (IVC) filter implantation. This patient re-presented with occlusion of his IVC filter with extensive thrombus extending down to his femoral veins bilaterally.

We performed catheter-directed thrombolysis using the EKOSonic Endovascular system. The patient had invasive monitoring alongside use of peri-operative cardiac imaging (TOE). A valvuloplasty balloon was used to prevent upward migration of thrombus.

There is potential for the wider use of the EKOSonic Endovascular system and catheter-directed thrombolysis in centres where there is surgical support available, and in selected patients where there is extensive thrombotic burden with risk of recurrence or long-term complications.

Calling the cardioverted: an audit of long-term anticoagulation in patients attending for DCCV

Direct current cardioversion (DCCV) is a method to restore sinus rhythm in patients diagnosed with atrial fibrillation (AF). Despite having high initial efficacy, the long-term success rate of this procedure is lower. Consequently, the European Society of Cardiology (ESC) guidelines recommend indefinite anticoagulation in patients with a high risk of recurrence. We sought to establish whether these guidelines had been adhered to in a district general hospital.

Anticoagulation data were provided by GP practices for 208 patients who had undergone a DCCV for AF between 2008 and 2010. One hundred and sixty-five patients (79%) were prescribed warfarin. The remaining 43 patients were invited to a screening clinic with 21 subsequently attending (49%). Eleven of the patients were in AF (p=0.0002) and in five of the 11 patients this had not previously been documented (p=0.035). Nine of the 11 patients in AF (82%) met ESC criteria for anticoagulation with a mean CHA2DS2‑VASc score =2.18 ± 1.48.

Our findings suggest that nearly half of patients not on anticoagulation following DCCV have recurrence of AF warranting antithrombotic therapy. We propose similar screening is adopted in other centres in order to ensure that ESC guidelines are being met.

Typical echocardiographic assessment of left ventricle (LV) size is based on single-dimensional measurements at mitral valve leaflet tips. In ischaemic and non-ischaemic cardiomyopathy (ICM and NICM) and aortic regurgitation (AR) where spherical remodelling is observed, this single-dimensional measurement at the LV base may underestimate LV volume. We hypothesised the maximum diameter would provide a closer approximation. A retrospective analysis of 1,680 consecutive cardiovascular magnetic resonance (CMR) examinations identified 82 patients with substantial LV dilation (LVEDVi >130 ml/m2) and 23 controls. LV end-diastolic and end-systolic diameters were measured using echocardiography and CMR at the standard level (EDDMV and ESDMV) and the maximum diameter (EDDmax and ESDmax). Indexed diameters were fitted to indexed volumes using cubic regressions. Maximum diameters had higher R2 values in fitting LV volume, and improved categorisation of subjects with chamber enlargement without substantially increasing the false-positive rate. Standard measurements may underestimate LV volume in cases of spherical remodelling, use of the maximum dimension may be a straightforward approach to improve assessment of LV volume and remodelling.

Syncope in a patient with cardiac sarcoidosis

A 46-year-old man with cutaneous sarcoidosis and pulmonary involvement was referred to a cardiologist for possible pulmonary hypertension in view of increasing shortness of breath. Echocardiogram findings and electrocardiogram (ECG) changes prompted the need for coronary angiography, which was subsequently normal.

Cardiac sarcoidosis was one of the differential diagnoses. The patient was booked for a treadmill test. Unfortunately, in the interim, the patient had an episode of collapse while playing football. The local district hospital discharged the patient after finding normal computed tomography (CT) brain scan and negative troponin. He was re-admitted with a pre-syncopal episode and ambulatory ECG monitoring revealed non-sustained ventricular tachycardia. A cardiac magnetic resonance imaging (MRI) scan was arranged followed by insertion of an implantable cardioverter defibrillator (ICD).

The British Cardiovascular Society (BCS) is the host Society for the European Society of Cardiology (ESC) Congress in 2015, which is being held...

The National Institute of Health and Care Excellence (NICE) has published a new quality standard on the treatment and management of atrial fibrillation...

‘Ultrasound on demand’ − how will it work in the UK?

An ‘Ultrasound on demand’ scheme has recently been launched in the UK. Aimed at providing access to the best technology at an affordable...

Digoxin and the heart

News from the 17th International Symposium of Atherosclerosis

The latest in lipids medicine was presented at the 17th International Symposium of Atherosclerosis (ISA), which took place in Amsterdam, The Netherlands, from 23rd–26th...

The ESC textbook of preventive...