Direct current cardioversion (DCCV) is a method to restore sinus rhythm in patients diagnosed with atrial fibrillation (AF). Despite having high initial efficacy, the long-term success rate of this procedure is lower. Consequently, the European Society of Cardiology (ESC) guidelines recommend indefinite anticoagulation in patients with a high risk of recurrence. We sought to establish whether these guidelines had been adhered to in a district general hospital.

Anticoagulation data were provided by GP practices for 208 patients who had undergone a DCCV for AF between 2008 and 2010. One hundred and sixty-five patients (79%) were prescribed warfarin. The remaining 43 patients were invited to a screening clinic with 21 subsequently attending (49%). Eleven of the patients were in AF (p=0.0002) and in five of the 11 patients this had not previously been documented (p=0.035). Nine of the 11 patients in AF (82%) met ESC criteria for anticoagulation with a mean CHA2DS2‑VASc score =2.18 ± 1.48.

Our findings suggest that nearly half of patients not on anticoagulation following DCCV have recurrence of AF warranting antithrombotic therapy. We propose similar screening is adopted in other centres in order to ensure that ESC guidelines are being met.

Atrial fibrillation (AF) is the most common arrhythmia in the UK and is estimated to affect 2% of the general population, rising to affect 8% of individuals aged over 75 years.1 Without appropriate antithrombotic therapy, non-valvular AF confers a five-fold risk of stroke and thromboembolism.2 Oral anticoagulation effectively reduces stroke risk by two-thirds.3 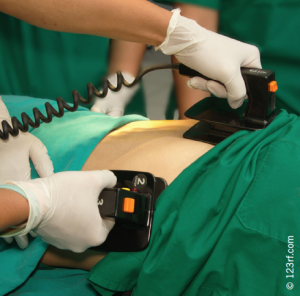 Direct current (DC) cardioversion (DCCV) is one strategy to restore sinus rhythm in patients with AF (see figure 1), and has been used in clinical practice since the 1960s. This procedure has relatively high initial success rates, however, it has become increasingly evident that the procedure has a high failure rate in the longer term. Previous studies have shown that between 20% and 47% of patients remain in sinus rhythm at one year.4,5 Accordingly, recent guidelines recommended that anticoagulation should be continued indefinitely in those with a high risk of AF recurrence. In 2010, the European Society of Cardiology (ESC) stated that “in patients with risk factors for stroke or AF recurrence, VKA (vitamin K antagonist) treatment should be continued lifelong irrespective of apparent maintenance of sinus rhythm following cardioversion”.6 Updated guidelines in 2012 also suggested a more aggressive approach to anticoagulation, with consideration of antithrombotics in those patients with a CHA2DS2-VASc risk score ≥1.7 Current literature suggests that a significant proportion of AF patients do not receive appropriate anticoagulation despite these measures.8

Patients who attended for a DCCV between 2008 and 2010 were identified using hospital IT records. Local general practitioners (GPs) were subsequently contacted to establish which of these patients were not currently prescribed warfarin. These patients were invited to attend a clinic between March and October 2014. During attendance, a cardiologist took a brief medical history and performed a clinical examination. A resting 12-lead electrocardiogram (ECG) was also performed. The findings from this consultation were audited against ESC guidelines.

Two hundred and sixty DCCVs were performed over a three-year period between 2008 and 2010 for patients registered with local practices: 19 of these were repeat attempts representing 241 patients in total. At the time of the cardioversion the patients had a median age of 71 years (figure 2).

By 2014, 21 patients (9%) were identified to be deceased. We were able to establish a cause of death for 16 of these patients; none were classified as a stroke or bleeding event. Twelve patients (5%) had changed practice, hence, data regarding their anticoagulation status was unavailable. Therefore, anticoagulation status was provided for 208 patients. One hundred and sixty-five patients (79%) were prescribed warfarin, and 43 (21%) were not, according to their current GP prescription records. The latter 43 patients were invited to a designated cardiology clinic with, overall, 21 patients attending (49% uptake) (figure 3).

Of the 10 patients found to be in sinus rhythm at the screening clinic, 40% had a previous diagnosis of atrial flutter, contrasting with 0% in the group with recurrent AF (p=0.035). Left atrial (LA) diameter was significantly increased in those with recurrent AF (4.49 ± 0.48 vs. 3.77 ± 0.55 cm; p=0.0047). Other baseline characteristics did not differ significantly between the groups (table 1).

An ablation procedure following the DCCV significantly favoured maintenance of sinus rhythm (40% vs. 0%; p=0.035). There was also a tendency for the patients in sinus rhythm to be prescribed class Ic or III anti-arrhythmic drugs (30% vs. 9%; p=0.31), although this did not meet statistical significance (table 2).

This audit shows that the majority of patients, three to six years following a DCCV, were prescribed anticoagulation appropriately. However, a significant number who were not on anticoagulation therapy had a recurrence of atrial arrhythmia, yet met current ESC criteria for treatment. Furthermore, a large proportion of those patients with recurrent AF had formerly not been identified. Overall, in the long term, few patients appear to remain both in sinus rhythm and without anticoagulant therapy. LA dilatation appears to predispose to AF recurrence and, conversely, a diagnosis of atrial flutter, and ablation therapy, confers a reduction in risk of arrhythmia recurrence. This is in keeping with previously reported literature.9

Admittedly, our findings are limited by a small sample size, and are also prone to selection bias; the patients attending the clinic were likely to exhibit health-seeking behaviour. Alternatively, it is possible that non-responders were already under the care of an appropriate physician.Despite these potential weaknesses, these results suggest that nearly half of patients not on any form of anticoagulation following DCCV in the long term have a recurrence of atrial arrhythmia warranting antithrombotic therapy. We propose that similar screening strategies are adopted either in primary or secondary care. Prospectively, we also suggest that, if a patient does not remain on long-term anticoagulation following DCCV, clear instruction with regards to ongoing rhythm monitoring should be given both to the GP and patient. We believe that these measures should ensure appropriate uptake of anticoagulation therapy and reduce subsequent thromboembolic risk in these individuals.

We are very grateful to Jennie Morritt, Laura Greswell, Noemi Findlay and our local general practices for their help with the audit.

4. Sandler A. Whatever happens to the cardioverted? An audit of the success of direct current cardioversion for atrial fibrillation in a district general hospital over a period of four years. Br J Cardiol 2010;17:86–8. Available from: https://bjcardio.co.uk/2010/03/whatever-happens-to-the-cardioverted-an-audit-of-the-success-of-direct-current-cardioversion-for-atrial-fibrillation-in-a-district-general-hospital-over-a-period-of-four-years/

DOACs for stroke prevention in patients with AF and cancer

An exercise-based cardiac rehabilitation programme for AF patients in the NHS: a feasibility study