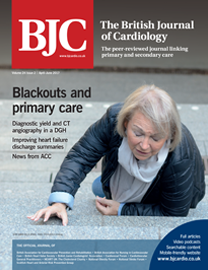 A triumph of British cardiovascular medicine: “… and the last can be first…”

In troubled times, in a sea of uncertainty, it is easy to forget that the UK remains the envy of the world in one aspect at least: the delivery of a national health service (NHS). The structure and organisation of UK general practice; the existence and authority of the National Institute for Health and Care Excellence (NICE) – with national guidance and local dissemination and structured implementation – remain the envy of the world. While our European neighbours stand by holding each other’s coats as Brexit rumbles on, we forget that each of these nations gazes at our health service and wishes they had one just like ours.

Transient loss of consciousness (TLoC) in primary care: a review of patients presenting with first blackout

Blackouts are common, affecting up to 50% of the population. However, little is known about the incidence and initial management of blackouts in primary care. A retrospective computerised search of the medical records of 16,911 patients in two UK practices found the incidence of first presentation with blackout to the GP to be 3.4/1,000 patients/year. Affected patients’ records were then individually reviewed to assess whether key aspects of National Institute of Health and Care Excellence (NICE) blackouts and European Society of Cardiology syncope guidelines had been followed during that initial consultation. GPs were generally better at enquiring about features that differentiate between vasovagal syncope and epilepsy. They were not as good at detecting syncope red flags, which help to identify the cardiac causes of syncope that are associated with higher mortality. Raising awareness of these red flags in primary care was recommended.

Does CTCA improve the diagnostic yield from conventional coronary angiography? A DGH experience

Our objective was to determine whether the development of a computed tomography coronary angiogram (CTCA) service has improved the yield of significant coronary artery disease (CAD) and subsequent referral for revascularisation following conventional invasive coronary angiography (ICA).

A retrospective audit comparing angiographic findings in a cohort of 2,094 patients investigated between 2007 and 2012 with findings from a cohort of 554 patients investigated in 2014 and 2015 during which time a CTCA service had been established. Cases included were those patients undergoing elective angiography for the assessment of possible coronary disease without any history of previous revascularisation.

In conclusion, the availability of a CTCA service has not had any significant effect on the diagnostic yield of ICA. We propose that, adherence to current guidelines, results in a potential underuse of CTCA in the investigation of suspected stable CAD because a sizeable proportion of patients undergoing ICA have non-significant disease.

Sodium-glucose co-transporter 2 (SGLT2) inhibitors are a novel insulin-independent therapy for type 2 diabetes mellitus (T2DM). By inhibiting renal glucose re-absorption, they improve glycaemic control and have beneficial effects on weight and blood pressure. Current guidance states that any new diabetes medication must be shown not to unacceptably increase cardiovascular risk. The landmark EMPA-REG OUTCOME (Empagliflozin Cardiovascular Outcome Event Trial in Type 2 Diabetes Mellitus Patients) trial demonstrated that treatment with the SGLT2 inhibitor empagliflozin compared with placebo showed a significant reduction in the risk of major cardiovascular end points and hospitalisation for heart failure for patients with T2DM and existing cardiovascular disease. A positive impact on several renal outcomes was also demonstrated in secondary analysis. These milestone results are set to have significant implications on prescribing practice in T2DM, with potential benefits for many patients with existing cardiovascular disease.

Characteristic electrocardiogram (ECG) features of posterior myocardial infarction (PMI) do not include typical ST-segment elevation and, therefore, carries the risk of delayed diagnosis and management. The aim of this study was to investigate how well PMIs are recognised and whether a lack of recognition translates to a larger infarction. This was a retrospective cohort study of patients sourced from a cardiac catheterisation database. Based on ECG analysis, patients included in this study included those meeting PMI criteria and those meeting ST-elevation myocardial infarction (STEMI) criteria as the control group. Door-to-balloon times were used as an outcome measure for differences in recognition between PMIs and other STEMIs. Troponin was used as a surrogate marker to measure degree of myocardial damage. There were 14 patients meeting PMI criteria and 162 meeting STEMI criteria. PMI patients had significantly longer door-to-balloon times. There was no statistically significant difference between PMI and STEMI group initial troponins t(169)=1.05, p=0.30, or peak 24-hour troponins t(174)=–1.73, p=0.09. In conclusion, using door-to-balloon times as a marker for recognition, this study illustrated that patients suffering PMI experience delayed recognition and management compared with non-PMI STEMIs. This did not, however, result in a significantly larger size of infarction as shown by peak troponin levels.

We are delighted to announce two new members to our editorial board: Professor Una Martin and Dr Juan Pablo...

This year’s ACC.17 was a very newsy meeting with good news for lipid lowering, and the first outcome study for the new PCSK9 inhibitors...

News from the 9th BSH day for revalidation and training