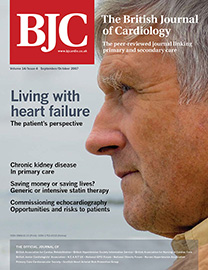 Challenge and change for the BJC

Huge changes are underway within the UK’s National Health Service (NHS). A far-reaching programme of marketing-orientated changes has resulted in “the emergence of a new NHS where increasingly care is delivered by an ‘alphabet soup’ of agencies and public and private providers”. These changes have affected both primary and secondary care and they continue to impact on the practice of medicine.

Atherothrombosis is the underlying pathology for most ischaemic events, including myocardial infarction, many forms of stroke, peripheral arterial insufficiency, and cardiovascular death, together with sudden cardiac death. As such, atherothrombosis represents a major healthcare concern throughout the world. Due to the increase in sedentary lifestyle and overeating, obesity, metabolic syndrome, and diabetes are all increasing in parallel, fuelling the atherothrombosis epidemic. It is likely, as the population ages and as urbanisation and industrialisation continue, that atherothrombosis will grow in prominence as a major public health problem.

Kevin F Fox on behalf of the British Society of Echocardiography

Patients are waiting too long for echocardiography. A British Society of Echocardiography (BSE) survey shows that 62% of patients are waiting longer than four weeks and 23% more than 18 weeks.1 There is substantial under provision of services and those that do exist need to work more effectively. The government is focussing on diagnostic services, including echocardiography, with a number of programmes including the 18-week project and expanding commissioning of services beyond traditional providers.2

Semi-structured interviewing of patients with an objective diagnosis of chronic heart failure was undertaken. Analysis of the transcripts identified seven themes on health-related quality of life. These were: changes in physical ability, emotional state, self-awareness and self-perception, changes in relationships, symptoms, maintaining social/lifestyle status and cognitive aspects.

Findings from this study will contribute to the development of a patient-led health-related quality of life measure for use in everyday practical care in a chronic heart failure population.

One-year data from the UK arm of the REACH Registry

Atherothrombosis is a leading cause of global mortality. It represents a significant public health issue in the UK and, as such, the UK Government has made it a healthcare priority. The global REduction of Atherothrombosis for Continued Health (REACH) Registry aims to evaluate the long-term risk of atherothrombotic events in an at-risk population, to assess the importance of cross-risk and to define predictors of atherothrombotic events. REACH has recruited over 68,000 people in over 5,000 centres in 44 countries, of which 618 were from the UK.

Chronic kidney disease (CKD) is an independent risk factor for cardiovascular disease and in February 2006 was added to the Quality and Outcomes Framework (QOF) for primary care in the UK. The QOF indicators apply to all patients with stage 3–5 CKD and include the production of a register of such patients, appropriate monitoring and treatment of hypertension and the prescription of angiotensin-converting enzyme (ACE) inhibitors or angiotensin receptor blockers (ARBs).

Over the last few years, there has been a gradual increase in the use of intensive statin therapy, ostensibly atorvastatin 80 mg for high-risk individuals, such as those who suffered a myocardial infarction or underwent revascularisation. First-World economies, such as the UK, with a significant state contribution healthcare funding, had mounting anxiety because of the expanding indications and therefore cost of intensive statin therapy. The perceived relative expense of this strategy provoked a swift, often unilateral, withdrawal of such regimens by commissioners.

Stent thrombosis and antiplatelet therapy: a review of 3,004 consecutive patients in a single centre

Stent thrombosis (ST) is an uncommon but serious complication of percutaneous coronary intervention (PCI), and is associated with the discontinuation of antiplatlet therapy. In a retrospective study of ST cases during a two-year period of the Wessex Regional Cardiac Unit, 3,004 (1,661 emergency and 1,343 elective) patients underwent PCI between November 2003 and October 2005. There were 25 episodes of ST occurring in 22 patients (overall incidence of ST is 0.83%). There were two (8%) cases of acute ST, eight (32%) of sub-acute ST and 15 (60%) of late or very late ST (five cases between six and 12 months and one case more than one year post-procedure). In the late and very late ST group only one patient was taking dual antiplatelet therapy.

The demand for non-invasive diagnostic imaging in cardiology increases with the advancing age of the population. Whilst exercise testing and myocardial perfusion scintigraphy have provided non-invasive functional assessment of coronary artery disease there has been little alternative to invasive coronary angiography for anatomical assessment of the coronary tree.

Rhabdomyolysis and acute renal failure due to simvastatin and amiodarone

Rhabdomyolysis is an uncommon but potentially serious adverse reaction associated with the use of statins. Simvastatin is metabolised by cytochrome P450 CYP3A4 and amiodarone is an inhibitor of this enzyme. Concomitant use of these drugs, especially with high doses of simvastatinm may result in myopathy. Acute renal failure as a result of rhabdomyolysis due to this aetiology is rare with only a few cases reported previously. Here, we report a case of rhabdomyolysis and acute renal failure secondary to concomitant use of simvastatin and amiodarone.

News from the 2007 Congress of the European Society of Cardiology

Back to the future: familial hypercholesterolaemia revisited

Edinburgh’s Heriot-Watt University hosted the 21st Annual Medical & Scientific Meeting and the Patients’ Workshop of H.E.A.R.T UK this summer. The theme was looking...

Heart disease in women was the theme for the SHARP (Scottish Heart and Arterial Risk Prevention Group) Spring Symposium held earlier this year in...

Things you always wanted to know about … the stethoscope