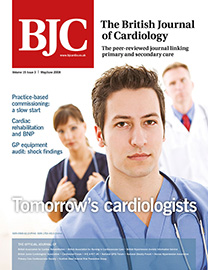 The needs and aspirations of the UK’s junior doctors have not been far from the headlines since the Medical Training Application Service (MTAS)/Modernising Medical Careers (MMC) debacle unfolded. The results of this year’s British Junior Cardiologists Association (BJCA) survey of cardiology trainees therefore make fascinating reading (pages 134–36). Our trainees are clearly both well informed and politically astute. Their views certainly deserve careful attention and at least four important issues emerge from this year’s survey.

Are you shocked by this report?

A key component of the UK General Medical Services (GMS) contract, which was implemented in April 2004, is the quality and outcomes framework (QOF).

Practice-based commissioning: should cardiologists fear it?

Practice-based commissioning (PBC) achieved universal coverage by the end of 2006 according to the Department of Health (DoH).1 So here we are well in to 2008 and I doubt if many cardiologists have seen any impact from PBC, and the latest DoH survey on PBC would suggest that the majority of general practitioners (GPs) feel that the scheme has yet to get off the ground. Having said that, 36% of practices say they have commissioned at least one new service through PBC.2 So will it die a natural death, or will it really make a difference to the way healthcare is commissioned? The DoH are saying that PBC remains central to world class commissioning, and the Conservative party are saying that, if they get in to power, they will give GPs real budgets. If we are to have payment by results, in a cash-limited service, we must have the balance of PBC. PBC aligns clinical and financial responsibility at the point of referral. It should also allow GPs to find new ways to deliver care closer to the patient, offer them real choice and drive up the quality of the care their patients receive. I cannot, therefore, see a future without some form of PBC and so it would make sense to come to terms with it and to make it work.

Availability of cardiac equipment in general practice premises in a cardiac network: a survey

Despite the major role of primary care in the management of people with, or at risk of developing, cardiovascular disease, little is known about the availability and state of readiness of cardiovascular diagnostic and monitoring equipment in general practice premises. We surveyed 170 general practices in one cardiac network. Our findings suggest that both provision of cardiac equipment, and training of staff in its use, is variable.

The management of patients with mechanical heart valves and intracerebral haemorrhage

Patients with mechanical prosthetic heart valves require oral anticoagulation to reduce the risk of thromboembolic events, but this can be complicated by anticoagulant-associated intracerebral haemorrhage (ICH). In order to make appropriate decisions about the resumption of anticoagulation in patients with mechanical heart valves and ICH, the risks of further bleeding must be weighed against those of thromboembolic events. There is limited evidence available to guide clinical decision-making in this situation and each case must be assessed individually, ideally with a multi-disciplinary team approach.

The British Society of Echocardiography (BSE) Education Committee has published a minimum dataset of 24 views for acquiring a standard adult transthoracic echocardiogram. To establish adherence to the minimum dataset, and secondly to establish the indication for echocardiography, we performed a retrospective review of 961 patients’ echocardiogram images and a prospective review (re-audit) of 832 patients’ echocardiograms, following a programme of echocardiographer education. Images were obtained from a computerised database over three months. Subjects were adult patients referred to the cardiology department of a large tertiary hospital in Oxfordshire. Results showed 17 views were consistently obtained in over 78% of patients, irrespective of audit period. Seven views were obtained in less than 50% of patients; of these, five views were performed significantly more frequently during re-audit. Apical four chamber continuous wave Doppler across the tricuspid valve, and subcostal views were performed in less than 45% of patients; this did not increase during re-audit. The main indication for performing an echocardiogram was assessment of left ventricular function, followed by assessment of valve function and investigation of arrhythmia. In conclusion, all echocardiographers need to be made aware of, and adhere closely to the requirements of the minimum dataset.

In a retrospective longitudinal cohort study of 111 consecutive patients with suspected left ventricular systolic dysfunction (LVSD) referred for open-access echocardiography, patient’s views at one-year follow-up in terms of satisfaction with the service, ongoing symptoms and personal health beliefs were assessed. Eighty-five (76%) patients completed a one-year follow-up questionnaire. LVSD was identified in only 18 (16%) patients. While 93% of all patients found the echocardiogram useful, 27% of patients could not recall being informed of the result. Many patients remained undiagnosed and symptomatic at one year. The detection rate for LVSD by open-access echocardiography remains low despite the use of a structured referral letter and screening electrocardiogram and chest X-ray.

The incidence of statin intolerance due to non-severe side effects is estimated to be 5–10%. As an increasing number of patients become eligible for lipid-lowering treatment, this is becoming a more prevalent issue. Very limited, if any, data exist so far in the management of this subgroup of patients. Clinic letters from 1,100 patients who attended the Lipid Clinic at Hull Royal Infirmary from January 2000 until December 2004 were searched for ‘statin intolerance’. Forty patients (19 male, 21 female, median age 62 years) were identified with intolerance to at least one statin drug but with an absolute indication to be on treatment. Out of the 40 patients, 26 (65%, 11 male, 15 female) were eventually able to tolerate a statin for at least six months without their initial side effect, the most commonly successful statins being rosuvastatin (n=9) and pravastatin (n=8). Overall, this required a median of two switches (range one to four) in statin treatment. Fourteen (35%) were unable to continue treatment after a median of 1.5 switches (range one to three), either because of continued intolerance or a decision not to proceed with more alternatives. In conclusion, nearly two thirds of patients with initial problems with a particular statin are able to take an alternative statin without side effects. This supports the trial of different statins in intolerant patients.

The relationship between BNP and risk assessment in cardiac rehabilitation patients

The 2008 American College of Cardiology meeting was held jointly with the Society for Cardiac Angiography and Interventions Annual Meeting on March 29th –...

The fourth annual survey from the British Junior Cardiologists Association (BJCA) reports at a time of restructuring of higher specialist training in the UK....

The JUPITER trial of rosuvastatin versus placebo has been stopped early because of “unequivocal evidence” of a reduction in cardiovascular morbidity and mortality with...

Getting fit for purpose?