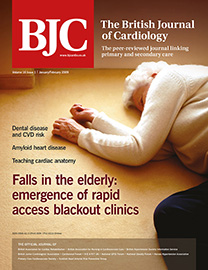 Blackout is a common, alarming symptom occurring across patients of all ages, and can create enormous psychological and social distress. In this review, we describe a new clinical approach that improves healthcare delivery to patients suffering blackouts.

10 steps before you refer for heart failure

Congestive heart failure (CHF) is an increasingly widespread condition, the prognosis for moderate and severe heart failure is almost identical to colorectal cancer1 and worse than breast2or prostate cancer.3 CHF has an overall population prevalence of approximately 1–3% rising to approximately 10% in the very elderly CHF accounts for about 5% of all medical admissions and approximately 2% of total healthcare expenditure.4 Nearly one million new cases are diagnosed annually worldwide, making it the most rapidly growing cardiovascular disorder. The consequences of heart failure for primary care are profound. CHF has been reported to be second only to hypertension as a cardiovascular reason for a surgery appointment.5Despite improvements in medical management, undertreatment is common, many patients with CHF still do not receive treatment optimised according to current guidelines.4,6 The introduction of the 2009/10 heart failure Quality Outcomes Framework (QOF) additions will bring financial incentives for the prescribing of beta blockers for patients with a diagnosis of heart failure. This will apply to all diagnosed heart failure patients. There are, however, no additional QOF points for optimising medication or maximum tolerated levels, therefore, patient care will rely on good practice and receiving treatment according to current guidelines. The prevalence of heart failure nationally in QOF is just over 1%. Because of the increase in survival after acute myocardial infarction and ageing of the population, the number of patients with heart failure will increase rapidly in most industrialised countries. Heart failure will continue to be a challenge to healthcare. The profile of heart failure management has been raised with the publication of the Coronary Heart Disease (CHD) National Service Framework (NSF) Chapter 6 in 20007 and the National Institute for Health and Clinical Excellence (NICE) Heart Failure Clinical Guideline 2003.8 The heart failure publications have supported the development of community heart failure services, and heart failure specialist nurse roles. The development of the General Practitioner with Special Interest (GPSI) in cardiology qualification and the accreditation in community echocardiography in 2004 has enabled the development of community heart failure services. The training and development of the workforce in primary care has led to improvements in the treatment and management of heart failure patients. A referral to a community specialist heart failure service or secondary care will still be relevant in certain instances, however, the 10 steps will assist in the decision to continue the management in primary care or refer for expert advice and a future management plan.

The amyloidoses comprise a collection of disorders in which proteins, some native and some mutated, are deposited in tissues. These proteins self-assemble themselves to form an ordered fibrillar matrix termed amyloid. Currently, more than 20 different proteins have been identified, the most common with as many as 100 different mutations per protein. Despite these figures, the conditions that arise clinically are not that common. This undoubtedly results in a number of such individuals not being identified, or typically only when it is too late to effect a cure. This article describes the features, diagnosis and treatments for the different types of amyloid that affect the heart.

A 52-year-old man presented to the emergency department with increasingly frequent anginal chest pain. He had had an anterior ST elevation myocardial infarction two years previously, for which he received thrombolysis. He was an ex-smoker, hypercholestrolaemic and had a family history of ischaemic heart disease. During stress electrocardiography, he developed chest pain at nine minutes of a standard Bruce protocol, but no significant ST changes.

Teaching and learning the three-dimensional anatomy of the heart can be challenging. The use of the hand to model structures in the heart has proven useful. In this article a more comprehensive model of the heart using a gloved hand is proposed.

The cardiovocal syndrome was first described by Otner, a Viennese physician, in 1897.1 It refers to a clinical syndrome of hoarseness due to dysfunction of the left recurrent laryngeal nerve, caused by cardiac diseases. Here, we describe a case of Otner’s syndrome following the second revision of mitral valve replacement.

Rapid access blackout clinics: a priority for the elderly

“Old age starts with the first fall and death comes with the second.”1 Syncopal events and falls are a major healthcare and cost burden for...

General practitioners (GPs) have become used to asking their patients fairly detailed questions about the traditional risk factors, such as smoking habits, and measuring...

The mouse is mightier than the pen

We continue our series in which Consultant Interventionist Dr Michael Norell takes a sideways look at life in the cath lab… and beyond. In...

A new on-line resource from the National Library for Health – the Vascular Specialist Library – has been launched to provide information for both...

Two government websites – NHS Choices and NHS Direct – have joined forces to provide the public with a one stop health information service:...

National search for ‘the face of diabetes’

As one person is diagnosed with diabetes every three minutes, faster than ever before, according to the charity Diabetes UK, the pharmaceutical company MSD...

People who have been diagnosed with panic attacks or panic disorder have a greater risk of subsequently developing heart disease or a myocardial infarction...

Phase III clinical study results with a nicotinic acid/laropiprant combination (Tredaptive®), show that in the treatment of patients with dyslipidaemia and primary hypercholesterolaemia, this...

A new report Focus on heart failure, by the NHS Institute for Innovation and Improvement, aims to provide primary and secondary care services with guidance...

The Scottish Heart and Arterial Risk Prevention Group (SHARP) was launched in 1988 with the aim of helping to reduce and prevent premature morbidity...

A busy and varied programme discussing some of the hottest topics in cardiovascular disease was presented at the 11th Primary Care Cardiovascular Society (PCCS)...

Cardiovascular magnetic resonance (CMR) is a safe and accurate imaging modality, with an established role in current cardiology practice. It is becoming essential for...