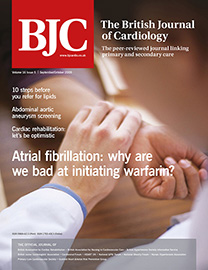 Cardiac rehabilitation: we should all be doing it

Cardiac rehabilitation (CR) is the process by which patients with cardiac disease, in partnership with a multi-disciplinary team of health professionals, are encouraged and supported to achieve and maintain optimal physical and psychosocial health.”1 The fundamental interventions required for CR should provide the cornerstone of lifelong management in cardiovascular disease – for those who present with the numerous manifestations, those identified as being at increased risk, and, indeed, all of us.

Within a prospective observational study we investigated whether patients undergoing coronary angiograms present a more accessible and significant cohort for abodominal aortic aneurysm (AAA) screening. With local research ethics committee approval, over 36 days, 106 consecutive patients consented to and underwent a five to eight minute aortic scan, using a portable ultrasound unit, during the recovery period after angiography. Anteroposterior and transverse, suprarenal and maximal infrarenal aortic diameters were measured. The ultrasonographer was blinded to the angiogram results. Of 104/106 successful scans 73 were conducted in male patients and 31 in female patients. Six males and 11 females had normal coronary arteries and no aneurysms. From 87 patients with ischaemic heart disease (IHD), eight males had aneurysms ≥3 cm diameter. Mean diameter was 4.2 cm (standard deviation [SD] 1.96, range 3–8.7 cm). Two additional males and two females had focal aortic dilatations of twice suprarenal aortic diameter yielding 14.9% and 10% incidence of aneurysmal change in scanned males and females with IHD. Average ages for patients with IHD were 62.2 years (SD 10.7, range 41–81 years) for males and 68.0 years (SD 10.6, range 47–88 years) for females. Average age for males with aneurysmal change was 68.8 years (SD 11.5, range 45–79 years). Results from this pilot study suggest that screening patients with IHD has a significantly higher yield than expected by the National Programme. These high-risk patients would benefit more than the general population from early detection and cardiovascular optimisation possibly with earlier AAA repair. Further expansion of the study would allow corroboration and qualification of these findings.

Why are we so bad in primary care at initiating warfarin in atrial fibrillation patients?

This article is an enlightened approach to reducing strokes in patients with atrial fibrillation (AF). It discusses some freely available software called ‘The Auricle’ and shows how this can easily be used to calculate the annual risk of a stroke. GPs and patients are supported in the careful decision about anticoagulation. To this end the programme has an e-consultation option to ask the opinion of a local cardiologist with the flexibility to attach an electrocardiogram (ECG), echo or clinic letter, if desired. All the details and the cardiologist’s opinion can be electronically filed in the patient’s notes to confirm that the pros and cons of warfarin were fully debated.

The value of echocardiography in atrial fibrillation

10 Steps before you refer for: Lipids

The impetus of national initiatives highlighting the importance of lipid modification, the sheer number of people involved, and the continuous nature of therapy, mean that lipid management has become an everyday primary care discipline.1 Most patients with dyslipidaemia can be investigated and treated effectively in primary care without referral to a specialist but, paradoxically, the increasing patient burden means an enhanced role for the specialist lipidologist as well. Patients who should be referred to a specialist lipid clinic include: Those with extreme values (primary care practitioners often feel less secure with mixed hyperlipidaemia and hypertriglyceridaemia than with pure hypercholesterolaemia). Generally, these can be defined as total cholesterol (TC) >7.5 mmol/L and/or fasting triglycerides (TG) >7.5 mmol/L. All patients with TG >20 mmol/L need to be referred given the risk of pancreatitis. Those who fail to show an effective response to treatment (whether by virtue of the type and severity of their dyslipidaemia or their intolerance of first-line agents). Those with familial dyslipidaemia (e.g. familial hypercholesterolaemia, familial combined hypercholesterolaemia and Fredrickson Types I or V [TG >20 mmol/L], or type III [TG=TC and >7 mmol/L]) should be managed by specialists as family tracking may be easier to co-ordinate, drug doses used are higher and combination therapies are more common. Special cases (such as those requiring the help of joint paediatric, nephrology, neurology, vascular surgery and HIV clinics) or those requiring special investigations such as apolipoproteins, enzyme testing, DNA genotyping, or more detailed vascular assessment.

A 24-year-old male who had been bedridden for the last three weeks and was recovering from a traumatic injury to his leg presented to our echo lab for evaluation of abrupt onset dyspnoea preceded by presyncope. Clinically he was tachypnoiec, had a pulse rate of 142 beats per minute, blood pressure 100/70 mmHg, oxygen saturation at room air 97% and electrocardiogram (ECG) showing sinus tachycardia. Transthoracic echocardiography revealed dilated right heart chambers and a long multi-lobed vermicular mass in all four cardiac chambers. Trans-oesophageal echocardiography confirmed a large multi-lobed mass straddling the interatrial septum on both sides through a patent foramen ovale (figure 1). The highly mobile mass (consistent with thrombus) protruded like a worm into the aortic valve in systole through the left ventricular outflow tract (figure 2). Within three hours the patient had sudden bradycardia and cardiac arrest, probably from cerebral embolisation.

Cardiac rehabilitation: are we putting our hearts into it?

Predicting adherence to phase III cardiac rehabilitation: should we be more optimistic?

Predicting uptake and adherence to cardiac rehabilitation (CR) continues to challenge providers of the service in the UK. This study included optimism with the more traditional predictors of adherence. The study included 61 eligible patients (37 men, 24 women) referred to an eight-week phase III CR programme. Socio-demographic data were collected including age, gender, diagnosis, employment, marital status and deprivation. Depression was measured using the Hospital Anxiety and Depression (HAD) scale. Dispositional optimism was measured using the Revised Life Orientation Test (LOT-R). Stages of change (SOC) for exercise were assessed. Attendance and completion of the eight-week CR programme were recorded for all patients. There was adherence to CR by 46 (75%; 27 men and 19 women) and non-adherence by 15 (25%; 10 men and 5 women). Dispositional optimism and SOC were found to be significant predictors of adherence (p=0.001 and p=0.038, respectively), with depression tending towards significance (p=0.0614). Socio-demographic variables were not significant. Greater optimism is associated with attendance at phase III CR. In addition, being in a higher stage of the SOC model is also associated with adherence. These findings can enable CR staff to identify patients at risk of failing to adhere, facilitating focused interventions to encourage adherence.

News from the 2009 Congress of the European Society of Cardiology

This year’s European Society of Cardiology (ESC) congress, held in Barcelona, Spain, from August 29th–September 2nd 2009, was awash with promising new data, including...

HEART UK – The Cholesterol Charity held its 23rd annual conference in Liverpool in June, focussing on understanding clinical trials and the evidence base...

I never take advice, as a rule

Case conferences from the Royal Brompton Hospital: a focus on myocardial ischaemia

This is the first in a regular series of ‘Case Conferences’ dealing with ‘difficult’ angina, or patients who present with challenging myocardial ischaemia (even...