The impetus of national initiatives highlighting the importance of lipid modification, the sheer number of people involved, and the continuous nature of therapy, mean that lipid management has become an everyday primary care discipline.1 Most patients with dyslipidaemia can be investigated and treated effectively in primary care without referral to a specialist but, paradoxically, the increasing patient burden means an enhanced role for the specialist lipidologist as well.

Patients who should be referred to a specialist lipid clinic include:

Those with extreme values (primary care practitioners often feel less secure with mixed hyperlipidaemia and hypertriglyceridaemia than with pure hypercholesterolaemia). Generally, these can be defined as total cholesterol (TC) >7.5 mmol/L and/or fasting triglycerides (TG) >7.5 mmol/L. All patients with TG >20 mmol/L need to be referred given the risk of pancreatitis.
Those who fail to show an effective response to treatment (whether by virtue of the type and severity of their dyslipidaemia or their intolerance of first-line agents).
Those with familial dyslipidaemia (e.g. familial hypercholesterolaemia, familial combined hypercholesterolaemia and Fredrickson Types I or V [TG >20 mmol/L], or type III [TG=TC and >7 mmol/L]) should be managed by specialists as family tracking may be easier to co-ordinate, drug doses used are higher and combination therapies are more common.
Special cases (such as those requiring the help of joint paediatric, nephrology, neurology, vascular surgery and HIV clinics) or those requiring special investigations such as apolipoproteins, enzyme testing, DNA genotyping, or more detailed vascular assessment.

A number of biological influences mean that cholesterol levels vary with time, often by 10%. Triglycerides can vary by 25%. For example, after an acute illness such as a myocardial infarction (MI), cholesterol levels drop by up to 30% as part of the acute stress response and may not return to pre-morbid levels for several months. As if this were not enough, sampling errors and analytical variation compound interpretation. As with high blood pressure, taking repeated measurements increases the precision of diagnosis. Repeat samples should follow a 12-hour fast to stabilise triglyceride levels and facilitate interpretation of the full lipid profile.

2. Identify the pattern of lipoprotein abnormality

Mixed hyperlipidaemia (raised TC and LDL-C with raised TG, often low high-density lipoprotein cholesterol [HDL-C]). This pattern is often seen in patients with glucose intolerance and diabetes and arises from the increased production and reduced breakdown of triglyceride-rich lipoproteins.

3. Exclude a secondary cause

A surprising number of patients are still referred for a decision on whether to initiate lipid-lowering treatment. All guidelines advocate a statin for secondary prevention (diagnosed coronary heart disease [CHD], cerebrovascular disease and peripheral arterial disease [PAD]) and several risk engines are available to calculate cardiovascular risk in primary prevention (e.g. Framingham, QRISK2).

In primary prevention, risk calculation should be superfluous in the presence of extremes of risk factors such as TC >8 mmol/L, TC to HDL-C ratio >6 or diabetes and the inherited hyperlipidaemias such as FH.

A number of adjustment factors can modify risk calculations and these include:

Only one round of adjustment is recommended.

Identify a family history of CVD (particularly premature CVD), sudden death, hyperlipidaemia, diabetes and hypertension. If the patient is uncertain, they could contact relatives before they are seen in the lipid clinic.

The estimated prevalence of FH is one in 500, suggesting that 120,000 individuals are affected in the UK. The condition is under diagnosed and a recent survey of lipid clinics indicates that, at most, 15,000 are known. Although the typical tendon xanthomata are pathonomic, only 20% of affected individuals will show them. Untreated, 50% of men with FH develop CHD by the age of 50, 50% of women by 60 years of age. The disorder has an autosomal dominant mode of inheritance, with children and siblings of a person with FH having a 50% chance of inheriting the condition. DNA testing in patients with the strongest clinical suspicion of FH, will detect up to 70–80% and facilitates the identification of other affected family members by cascade screening. This has been shown to be feasible, acceptable and cost-effective, and in August 2008 the National Institute for Health and Clinical Excellence (NICE) issued CG71 to facilitate this process.3 Primary care physicians need to be aware of the condition to refer possible cases for gene testing.

6. Check adherence to lifestyle and medication

Ask about lifestyle with attention to physical activity, smoking and healthy eating. Compliance with a pattern of diet and lifestyle that optimises weight, reduces fat (particularly saturated and trans fats) and incorporates soluble fibre, plant sterols and soya protein will have the greatest impact on cholesterol levels.

Without medication concordance, the expectation of evidence-based practice will not be realised. Asking about concordance often reveals a number of unnecessary concerns and misunderstandings that act as barriers to persistence.

Statins are generally well-tolerated drugs. Despite this, up to 53% of patients have discontinued statin therapy at two years.4

Cholesterol targets are surrogate goals from which evidence-based outcome benefits should be delivered. Both health professionals and patients feel comfortable with a goal of therapy (especially if this is simple and easy to remember) and target levels can be a powerful aid to fostering concordance.5

The ‘fire and forget’ approach (typified by NICE 067 endorsement of blanket simvastatin 40 mg) may be the cheapest solution for CVD prevention6 but a more sophisticated approach titrates therapies to underlying risk. Patients at highest risk (those with acute coronary syndromes [ACS], PAD, stroke and diabetes together with primary prevention ‘plus’ patients) should aim for lower targets (TC <4 mmol/L; LDL-C <2 mmol/L), whereas the approach for those at lower primary prevention risk or with stable CHD may be more relaxed. All patients at significant risk should attain TC <5 mmol/L and LDL-C <3 mmol/L.

Uptitrating from simvastatin 40 mg requires the use of higher intensity statins or combination therapy. Typically, simvastatin 40 mg will deliver 1.0–1.3 mmol/L LDL-C reduction. In a meta-analysis of statins versus placebo, a 1 mmol/L reduction in LDL-C reduces major vascular events by 22%.7 The latest data suggest a further reduction of at least 0.5 mmol/L is needed to effect a statistically significant reduction in major vascular events.8 This is not achieved by the common switch to atorvastatin 40 mg and is likely to require maximal doses of higher-intensity statins (atorvastatin 80 mg or rosuvastatin 20/40 mg) and/or addition of ezetimibe9 or even colesevelam. In situations of mixed dyslipidaemia, there are potential roles for combining statins with niacin or fenofibrate.

The incidence of liver failure in patients taking statins is thought to be 0.5/100,000 person-years (no more than in the non-statin population) implying significant safety margins.10 Minor elevations of alanine aminotransferase (ALT) or aspartate aminotransferase (AST) – the enzymes to measure – are sometimes seen as part of the normal response to statin therapy and these usually settle. More commonly, elevations of ALT or AST one to three times the upper limit of normal (ULN) reflect non-alcoholic fatty liver disease or excess alcohol. Repeat ALT or AST if >3x ULN and stop the statin if still >3x ULN. If this strategy is followed, half of the abnormalities resolve on re-testing and the statin may be continued. Persistent ALT abnormalities require further investigation. Rises in gamma-glutamyl transferase (GGT) are not relevant to the initiation or continuation of statin therapy.

Practitioners are aware of the serious threat of rhabdomyolysis with statins. CK should be measured prior to statin initiation. The incidence of rhabdomyolysis, however, is very low at 3.4 per 100,000 person-years (4.2 with CYP450 3A4-metabolised statins) and fatal rhabdomyolysis is even rarer at 0.3 per 100,000 person-years.10 Although reported myalgia in community studies of people taking statins is high, this includes the symptoms of degenerative disease and other musculoskeletal disorders. By contrast, documented myositis (defined as CK >5x ULN) in the statin trials is low (0.01%) but notably higher for simvastatin 80 mg (0.53%).11 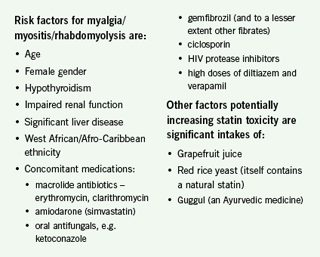 Statin side effects mostly occur on initiation but sometimes arise later. Among early side effects, gastrointestinal side effects generally resolve in a week. In contrast, myalgia (generalised muscle aches; no CK rise) is bimodal with most cases occurring soon after initiation, but a proportion occurring up to a year later. More severe forms of muscle-related side effects are myositis (muscle pain and CK rise >5x ULN) and rhabdomyolysis (severe muscle pain and CK >10x ULN). If CK exceeds 10x ULN the statin should be stopped, but lower levels can be monitored. Interpretation of lower CK levels is not easy and complicated by the fact that some asymptomatic individuals have raised levels and vice versa. It should be remembered that extreme exertion can markedly raise CK levels.

Statin intolerance is one of the most common reasons for referral to lipid clinics and may be real or apparent. Exclude emergent hypothyroidism or possible drug interactions. Less severe forms of intolerance are often idiosyncratic and it is reasonable to try different statins or use lower doses in combination with ezetimibe. If referral is necessary, given the vagaries of patients’ memories, it helps the specialist enormously to list the drugs used, their doses, and the patient’s responses.