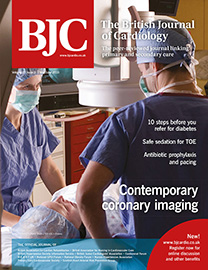 Should the BSE collaborate with the BSG on intravenous sedation?

If we consider gastro-oesopageal endoscopy as a similar procedure to transoesophageal echocardiography (TEE) then we might be alarmed at the 30-day mortality of 1:2,000 reported by Quine et al.1 I am not a practitioner of either of those arts, but I am putting on my anaesthetist cap to respond to the article by Mankia et al. discussing intravenous opiate/benzodiazepine sedation in this issue of the journal (see pages 125-7). The endoscopy death rate is especially concerning if you compare the fact that anaesthesia was considered to have been totally responsible for death in less than 1:10,000 operations in the UK.2 Mankia et al. quite rightly suggest that there should be guidelines concerning the safe use of intravenous sedation in TEE, and should be congratulated for highlighting this matter. I would suggest that their gastrointestinal endoscopy colleagues have a lot of experience on which to draw from.

Cardiovascular disease is the biggest killer in the UK causing 198,000 deaths per year, and stroke is the most common cause of disability in women. Can individuals at increased risk be identified and can heart attacks and strokes be prevented?

There is much debate about the optimal sedation strategy for transoesophageal echocardiography (TEE). Despite previous studies demonstrating the potential benefits of combining opiates and benzodiazepines for conscious sedation, and previous published national surveys and recommendations, sedation practice for TEE in clinical practice varies widely within the UK. All UK centres routinely use midazolam, but only 7% of centres use it in combination with an opiate: 14% of hospitals report no routine use of sedation for TEE. There is no British Society of Echocardiography (BSE) recommended TEE sedation protocol within the UK and even where guidelines exist locally, 82% of operators report being unaware of their details. Consequently, a wide range of sedative doses are used and many patients are reported to be over-sedated. We developed a new protocol for conscious sedation using intravenous pethidine and midazolam for TEE and have shown it to be safe and effective when implemented within an existing TEE service.

From the days of Virchow and the analysis of post-mortem coronary specimens, an enormous amount of knowledge has been built about coronary pathophysiology. In the 1950s the dream of in vivo coronary imaging became a reality with the invention of coronary arteriography under the guidance of Mason Sones. As we fast forward 50 years, it has become clear that angiography has helped us focus on areas of stenosis and flow limitation, but the main problem of coronary artery disease is much more complex than can appear on a luminal silhouette. The finding of ‘normal coronary arteries’ following angiography is short-sighted and does not take into account the potential of unstable disease lurking within the vessel wall. We begin the series with intravascular ultrasound.

In UK cardiac rehabilitation programmes, exercise training is often set at a percentage of maximal heart rate or heart rate reserve, either predicted or measured. Problems may arise when using this method for chronic heart failure (CHF) patients who often have chronotropic incompetence and are treated with beta blockers. A safer approach is to use cardiopulmonary exercise testing to prescribe training below the ventilatory threshold, thus ensuring that the exercise is moderate. The aim of this study was to determine whether British Association for Cardiac Rehabilitation (BACR) heart rate guidelines prescribe moderate intensity exercise for CHF patients. The only target heart rate range to prescribe exercise below the ventilatory threshold was 60–80% measured maximum heart rate. Target heart rates calculated from predicted maximum values were higher than those from measured values, and the heart rate reserve method resulted in the highest target heart rates. Cardiac rehabilitation exercise practitioners should be aware that these methods may well result in CHF patients performing heavy rather than moderate exercise.

10 steps before you refer for diabetes

Achieving the dose: an audit of discharge medication for the secondary prevention of myocardial infarction

To establish whether the medication received by patients post-myocardial infarction was prescribed at therapeutic doses, we performed a retrospective audit of discharge summaries. Over three quarters (75.1%) of all patients in the study group were discharged on sub-therapeutic doses of angiotensin-converting enzyme (ACE) inhibitors and beta blockers. In contrast, nearly all (94–97%) patients received a statin at a therapeutic dose. Aspirin and clopidogrel, where prescribed, were also within the therapeutic range in 100% of patients. These findings illustrate the difficulty in optimising the doses of drugs that have a wide range of possible doses during short hospital admissions.

Cardiac magnetic resonance (CMR) has much to offer in the clinical assessment of intra-cardiac space-occupying lesions (SOL). Below we describe the use of CMR as a second-line investigation complementing the use of other imaging modalities, using the example of three patients with atrial SOL. We briefly review the literature and discuss the use of CMR within the context of multi-modality imaging of cardiac SOL.

Antibiotic prophylaxis for permanent pacemaker implantation: an observational study of practice in England

There are no guidelines on the practice of antibiotic prophylaxis in pacemaker implantation resulting in wide variation in practice. We sought to investigate this and identify areas for further study and improvement. Using an email questionnaire, followed up with a telephone call if no response, all 121 adult National Health Service hospitals in England implanting pacemakers were asked about use of systemic prophylactic antibiotics at implantation. Data were obtained from 61 hospitals (50.4% of total contacted), covering a wide geographic distribution.

A new guideline has been published by the National Institute for Health and Clinical Excellence (NICE) and the National Clinical Guidelines Centre for Acute...

It is hoped that a new National Institute for Health and Clinical Excellence (NICE) guideline on recent onset chest pain will lead to a...

Dronedarone included in new appraisal consultation document An independent Appraisal Committee has revised NICE’s original recommendation that dronedarone should not be used to treat atrial...

Neither intensive blood pressure reduction, or adding a fibrate to a statin, appear to be justified in patients with diabetes at high risk of...

Top secret; for your eyes only

For more than 30 years, the term ‘cardioprotection’ has been applied widely and often without precision to sundry interventions that reduce the incidence and...

My initial reaction on reading this slim, elegant volume was a twinge of professional jealousy which was rapidly replaced by enjoyment. An important feature...