To establish whether the medication received by patients post-myocardial infarction was prescribed at therapeutic doses, we performed a retrospective audit of discharge summaries. Over three quarters (75.1%) of all patients in the study group were discharged on sub-therapeutic doses of angiotensin-converting enzyme (ACE) inhibitors and beta blockers. In contrast, nearly all (94–97%) patients received a statin at a therapeutic dose. Aspirin and clopidogrel, where prescribed, were also within the therapeutic range in 100% of patients. These findings illustrate the difficulty in optimising the doses of drugs that have a wide range of possible doses during short hospital admissions. 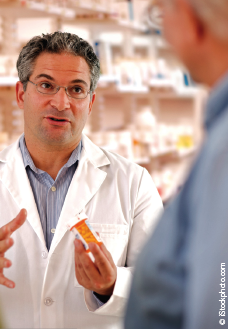 This retrospective audit was performed to assess whether patients discharged from the cardiology ward at the Queen Elizabeth Hospital, Birmingham, following ST-segment elevation myocardial infarction (STEMI) or non-ST-segment elevation myocardial infarction (NSTEMI) were prescribed the recommended medication at appropriate doses. The evidence for the prognostic benefit of drugs such as angiotensin-converting enzyme (ACE) inhibitors, beta blockers and statins after a myocardial infarction (MI) is derived from studies in which these drugs were used at high doses, such as Acute Infarction Ramipril Efficacy (AIRE),1 Carvedilol Post-Infarct Survival Control in Left-Ventricular Dysfunction (CAPRICORN),2 and Pravastatin or Atorvastatin Evaluation and Infection Therapy (PROVE IT).3 Lower doses may not confer the same benefit.

Recent studies on prescribing post-MI show that between 60% and 90% of patients are receiving each discharge medication as recommended by the National Institute for Health and Clinical Excellence (NICE),4-7 although this does appear to be increasing.5 This study aims to go further by assessing how many patients are being prescribed these drugs at doses likely to be effective.

Computerised discharge summaries, which included the discharge medications, were analysed retrospectively for 400 patients discharged between May and September 2008.

For study purposes, the sub-therapeutic doses of NICE recommended drugs for use post-MI were defined as follows:

Over three quarters (75.1%) of all patients in the study group (72.2% of STEMI patients and 77.2% of NSTEMI patients) were discharged on sub-therapeutic doses of ACE inhibitors and beta blockers.

In an attempt to improve prescribing practice, posters were displayed above the computers on the ward, in full view of the doctors writing the discharge summaries. These stated the therapeutic doses of ACE inhibitors and beta blockers and also suggested giving instructions to general practitioners (GPs) regarding up-titration.

During the six weeks with the intervention in place, there was no significant improvement in the doses of ACE inhibitors or beta blockers prescribed for patients post-MI. There was also no evidence that the intervention improved the instructions given to GPs for ongoing patient care.

These findings illustrate the difficulty in optimising the doses of drugs that have a wide range of possible doses during short hospital admissions. It is also notable that discharge summaries are usually completed by junior doctors with limited experience of prescribing cardio-active drugs. While a few patients may have had absolute contraindications to some drugs (e.g. asthmatics and beta blockers) and a few may have had problems such as hypotension limiting drug dosing, these factors are unlikely to have prevented the prescription of higher doses of drugs in over 75% of cases.

These findings suggest that doctors were either unwilling to change their prescribing habits, or perhaps they disagreed with the information on the posters. This study suggests that posters are not an effective method of influencing prescribing habits.

While short admission times limit scope for up-titration, all discharge summaries should include information for GPs regarding up-titration of ACE inhibitors and beta blockers if this cannot be achieved during the patient’s stay. Instructions to stop clopidogrel after one year should also be included. This could be accomplished by modifying the electronic prescribing systems, such as the one in use in our institution, to alert doctors to the therapeutic doses of the drugs they are prescribing, as well as providing information regarding up-titrations. This system could also be modified to include a space for manual input allowing doctors to explain why they were unable to follow guidelines, for example, in patients with contraindications. This would improve communication between the hospital and primary-care setting and allow more accurate results to be collected in future studies of discharge medication.

By achieving these targets the post-MI mortality rate could be significantly lowered.

Kyle Stewart and Pippa Woothipoom are joint first authors of this article.